Riding on fumes of creativity 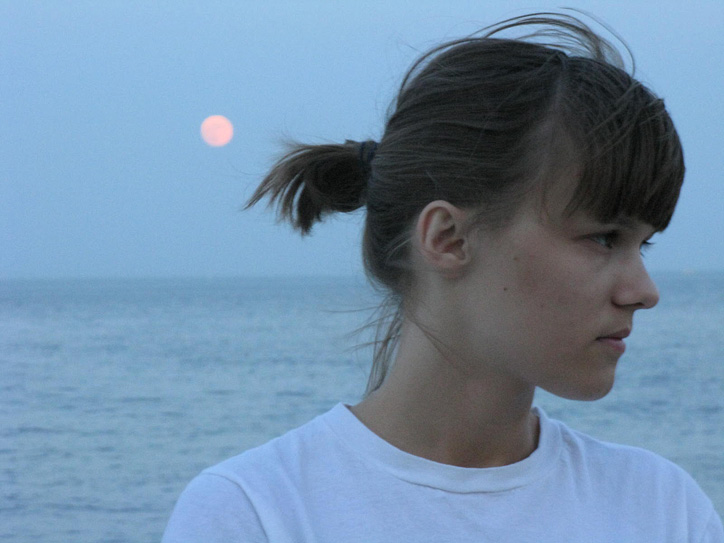 LA based artist, Misia Schmidt, illustrates a world full of calmness, charisma and cool girls with whom you can’t help but want to hang out. Girls skating. Girls relaxing. Girls listening to Pink Floyd. Hers is a world into which you could just jump, Mary Poppins-style: through the ink and into the good side of teenage life.

Could you introduce yourself – who you are and what you do – to our readers?

In a nutshell my name is Misia, and I'm an artist focusing mostly on painting and drawing. Feels weird to compress myself into one sentence like that.

What are your first and fondest artistic memories? Were you creative as a child?

I got my first comic book when I was probably four. It was a Polish book called "Tytus, Romek i A'Tomek". It influenced me a lot. I was intrigued by how alive it seemed – the movement on the page and the color. Later on I started collecting Donald Duck comics. My life would revolve around it! I lived in spans of two weeks, from one issue to the next. The anticipation of getting the new Donald Duck was my driving force at that time. I had a system of reading it – first looking at the pictures and deciphering the stories without actually reading the captions, then reading the ones that seemed the least intriguing, and leaving the best for last – stories about Donald and the nephews. I was high from it. When I was done with absorbing the content of the book I would get to drawing it. I picked some images that I found the most stimulating and tried to recreate them, kind of like riding on fumes of what was left. The relationship with Donald Duck must be my fondest artistic memory.
As far as being creative as a child, I think we all are. Naturally. Childhood is creative by default; I only grew protective of this creativity and carried it over to my so-called adulthood.

So you're living in LA, a city with such an exciting and ever-growing art scene. How would you describe your style as an illustrator and how do you feel living in LA has influenced it?

Before moving here I lived in a few different places – including Poland (where I grew up), UK, the East Coast and Midwest of the US, so I wasn't expecting to develop any special feelings about this part of the world. Surprisingly, I found myself to really love LA. It's a weird place to be – it's a major city with tons of people, yet it's easy to feel isolated out here. LA can be super artificial and surface-y, but at the same time very serene and spiritual. You take what you want from it. Probably in some way LA challenges and motivates me to keep trying to do my thing. There's this spirit of ambition in the air. A lot of people move here to realize their creative dreams. The climate and beautiful nature are big bonuses that help to ease any anxieties that accompany this pursuit. I'm not sure if the city directly influences my style, though I do sometimes get comments that my work is “so LA”. I think it has something to do with the sense of humor. LA art doesn't take itself too seriously.
To describe my style is not easy because it isn't fixed, rather it's constantly ebbing and flowing. It's almost easier for me to describe what I try to avoid when I make my work. I don't care for cuteness. I don't like trends (in general) and things devoid of freshness. I want my images to be more than nicely made and composed. It needs to go somewhere deeper for me. Detail is also very important – it makes the whole thing so much more intimate.

Your style is unique but at the same time feels very familiar, almost as if I have lived the illustrations myself. They evoke images that come to mind when reading books as a teenager: normally about a girl living life, hanging out with friends and just figuring out herself, is there a particular time or place in your life from which you draw inspiration? Are the characters inspired by anyone you know?

It's really cool that the work feels relatable. In a way through the process of drawing I'm searching for those experiences common to most teenagers. For my illustrations especially, I draw inspiration from the time that never was, or at least wasn't enough. My teenage years were interrupted by some challenging events and now I miss it. A lot. At the same time it feels good to be a little older and more confident. I'm not totally out of the woods yet, but who is?
The characters are mostly imagined but I do love to observe (from a safe distance) kids, especially pre-teens. To me it's the most beautiful state of human beings. By this age kids have already developed their most distinctive traits, they have their specific likes and dislikes which makes them so unique, but most of all (if they're lucky) they're still so gloriously unselfconscious. It's the time before the outside programming sets in and dictates to us what's hot or not, how to dress, how to be, what to have, etc.
I wish for my imagined characters to have that kind of freedom, yet not be devoid of other less positive traits.

There's something rather calming about your ink drawings in monochrome. The characters seem very chilled and relaxed as if they have all the time in the world and that feeling permeates through the illustrations. Do you feel that these illustrated personalities are a reflection of yourself and how you feel while you are drawing? Would you say you're quite a chilled person?

I would love to say that I am as chilled and relaxed as the girls I draw but that would be a big fat lie. I aim to be that cool! So easy, effortless and unselfconscious (although, isn't it a contradiction to try to be effortlessly chill? I fail already). I don't want to label myself as anything but I do have tendencies to be super anxious and tense. I carry a perfectionist gene and there's nothing relaxed about it. Thankfully making art helps me to calm the f. down. With the illustrations I often try to evoke the feeling I need the most at that moment. So if you see a picture of a cool, calm and collected girl, listening to music while reclining on the bed in a state of bliss, it's a safe bet I just came down from a major meltdown, my nerves in shreds, heart palpitations, bloodshot eyes from crying. Just kidding. No, I'm not.

Who are your favourite artists and illustrators? In what ways do you feel your style both resembles and differs from theirs?

Too many to list: Matisse, Philip Guston, Henri Rousseau, Marsden Hartley, Roger Brown, David Bates, Arthur Dove, Alice Neel, Dana Schutz, Rebecca Morris, Allison Miller, Sarah McEneaney, Lesley Vance, Brian Calvin, Alex Katz, David Hockney. Mixing dead and alive. I'm omitting a ton and it feels disrespectful.
As far as contemporary illustrators go I don't really follow anyone. I can't even come up with one name. In more general terms I do love the aesthetic of the artists from the Polish School of Poster Art. They worked in the 1950s through 1980s and were able to merge graphic and illustrative elements with more gestural and painterly qualities. As a result the posters were not only nicely designed images, but true works of art.
I think in order to be relevant and have an artistic dialogue it is important to know what's going on in the field, but sometimes (oftentimes) I also like not to know anything. Too often the things we see influence us without our permission and it's not always a good thing.

What are you like as soon as you pick up a pen/pencil/paintbrush? Is your creative mind constantly at work or is there a particular state of mind that you feel you must enter in order to be at your most productive? What helps get the creative juices flowing?

I don't really need to get into any special state to start working. I'm ready. In the zone. Of course I'm my best when I'm at ease, but it applies to all of us I think. If there's one thing, it's that I prefer to be completely alone. No distractions.

Describe your creative process. Do you find you start and before you know it, you've created something new or do you go back to the same pieces, changing them and adding to them?

At this point it's all one shot. I purposefully choose the materials and the scale that allow me to finish a piece in one sitting. It's so much better this way. I used to take my time, get serious, get fussy, and by the end I was exhausted, bored and totally over it. Not to mention the paintings looked labored and overworked. Not good.
I also try not to plan beforehand. If I think about it too much the idea gets stale before I put it down. I need to be interested and connected to what I do.

How do you like to spend your time when you're not illustrating? What interests you outside of the drawing world?

I recently purchased a skateboard so this is my jam right now. Learning to ride was my long time dream, totally influenced by the Simpsons cartoon intro! I was in complete awe watching Bart cruising down the streets. Manifesting it!

What does the future hold for you?

Ask the future. I hope some great surprises. Mind blowing stuff. I hope to turn my love for drawing and painting into a successful career. I hope to do things that make me feel good and maybe others too. Just enjoy the freedom. 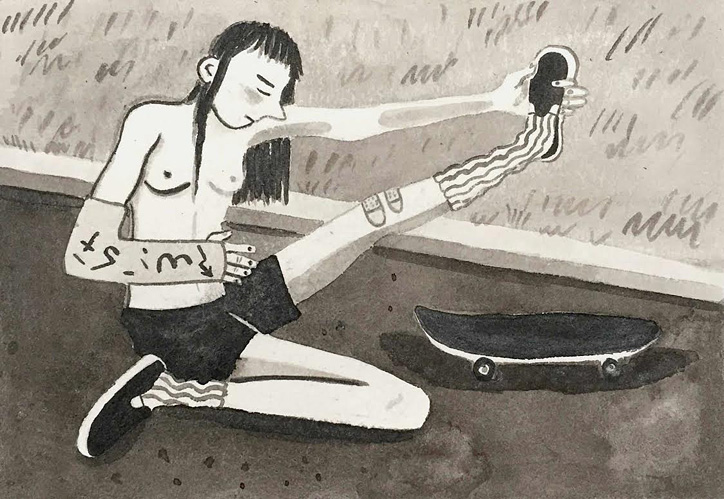 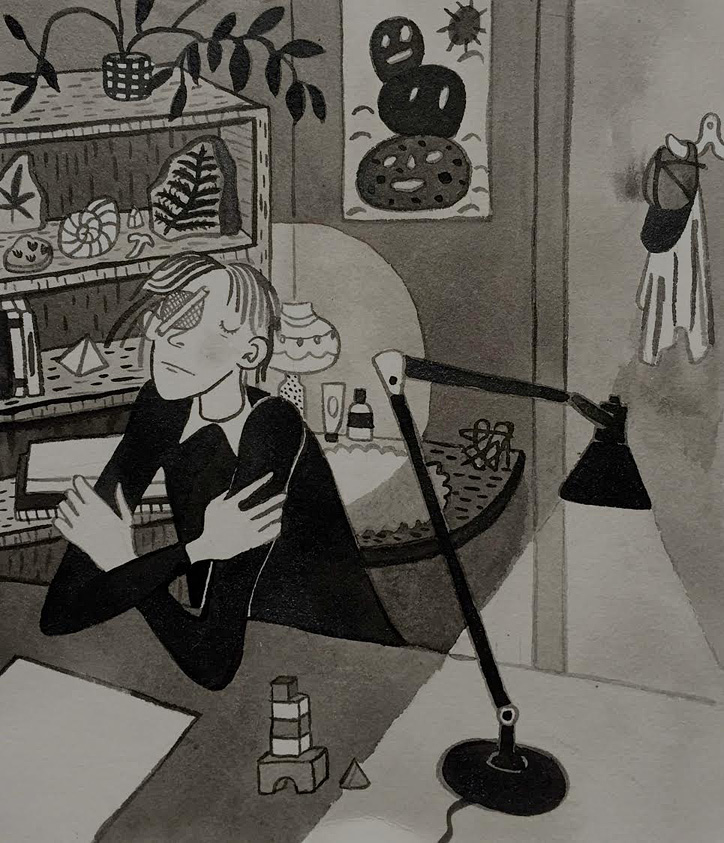 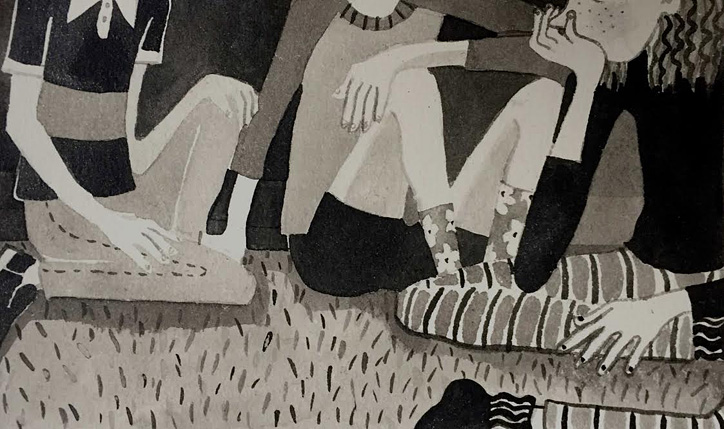 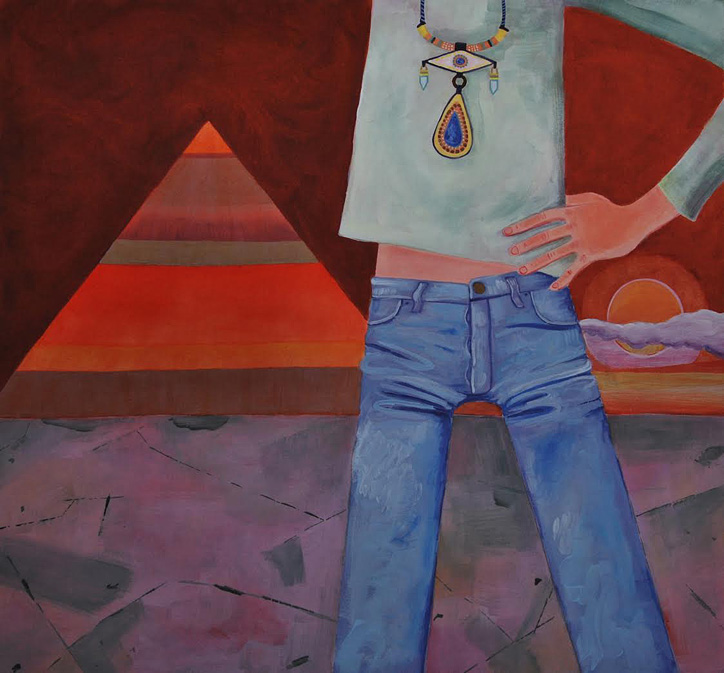 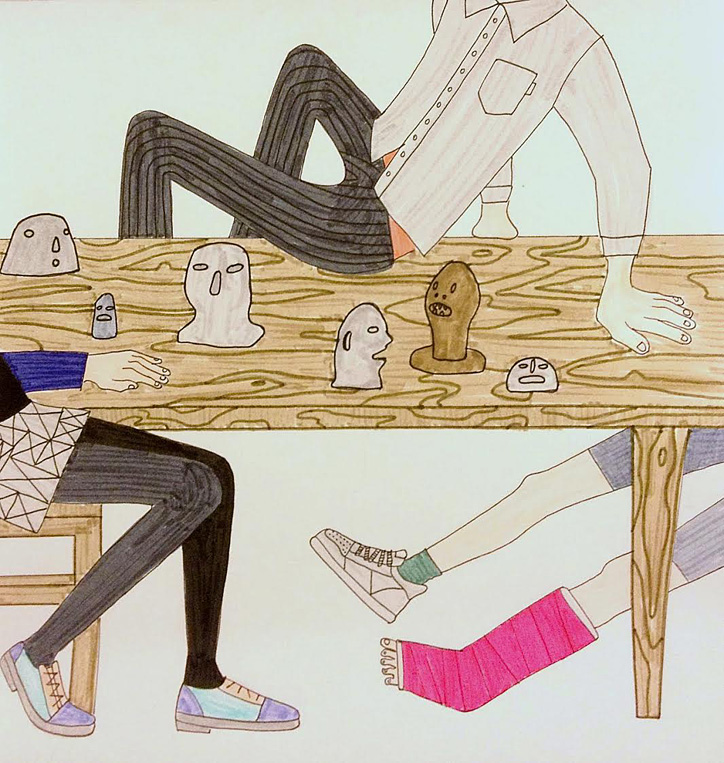 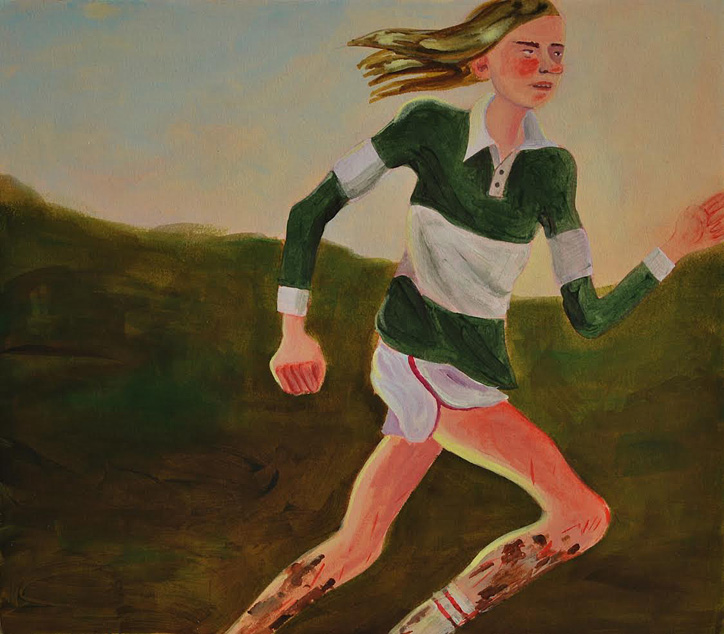 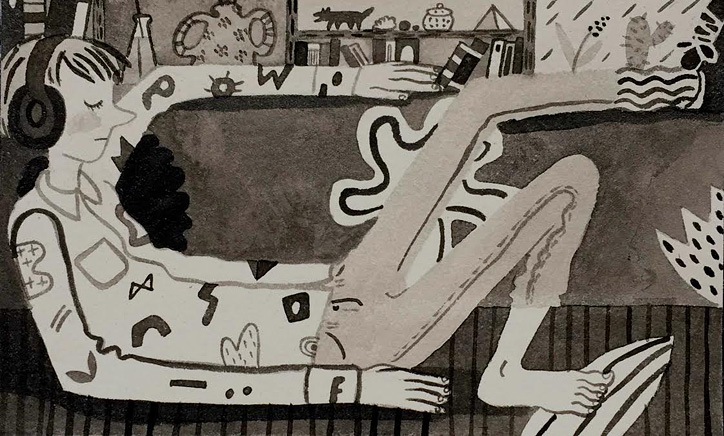 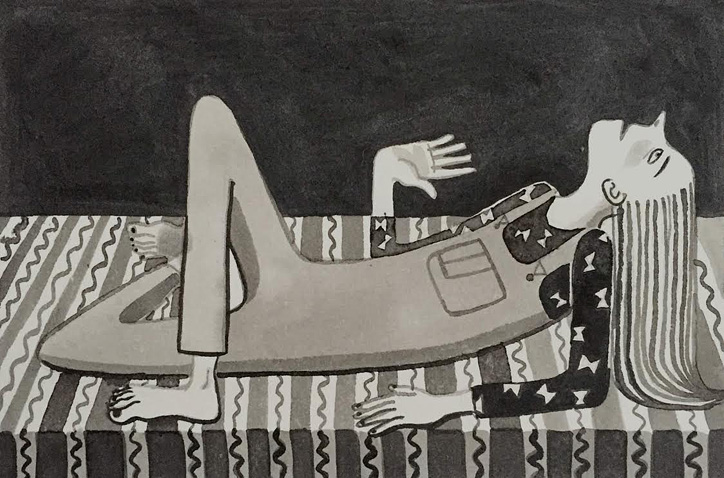 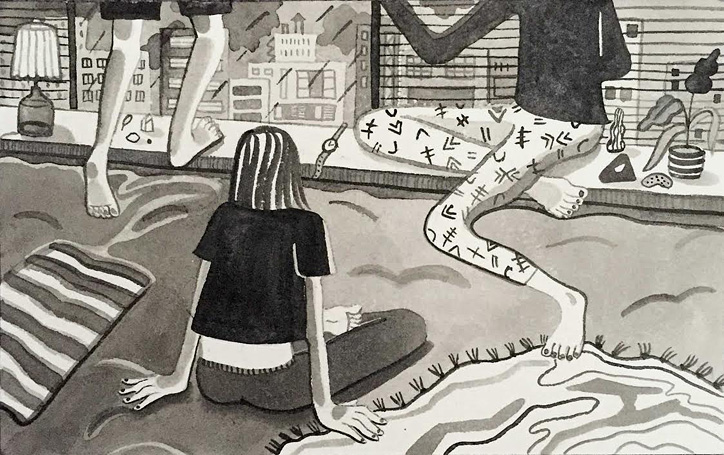 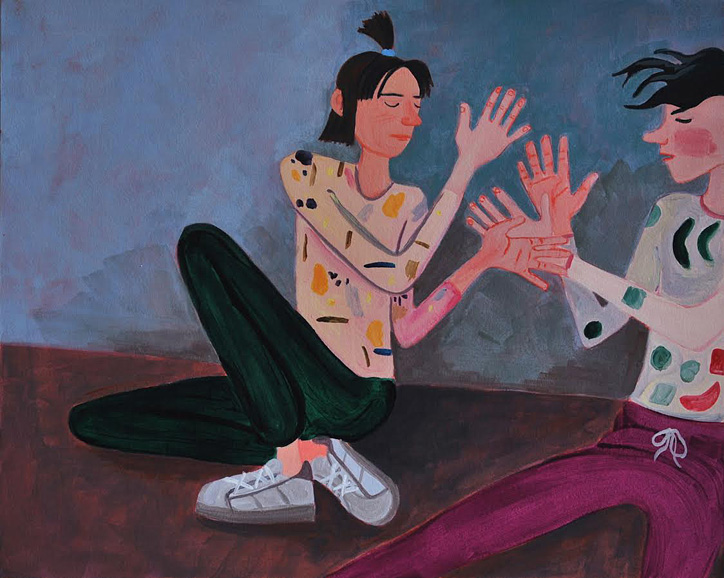 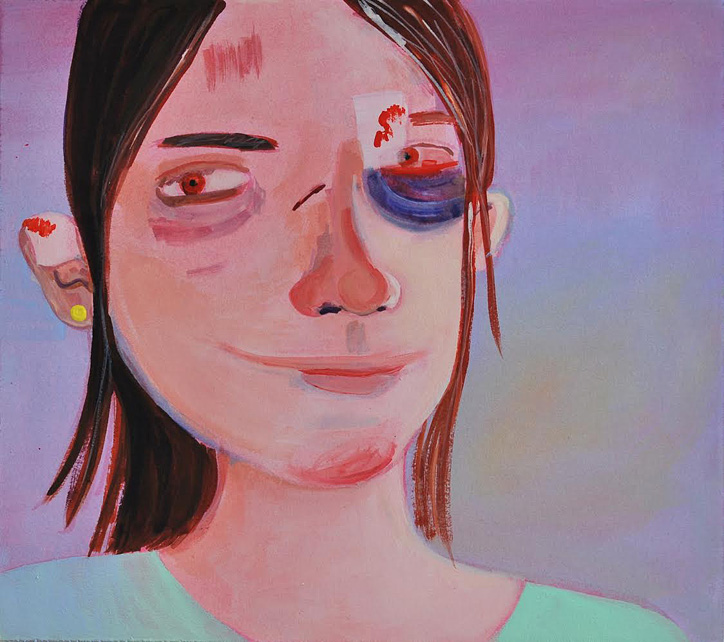 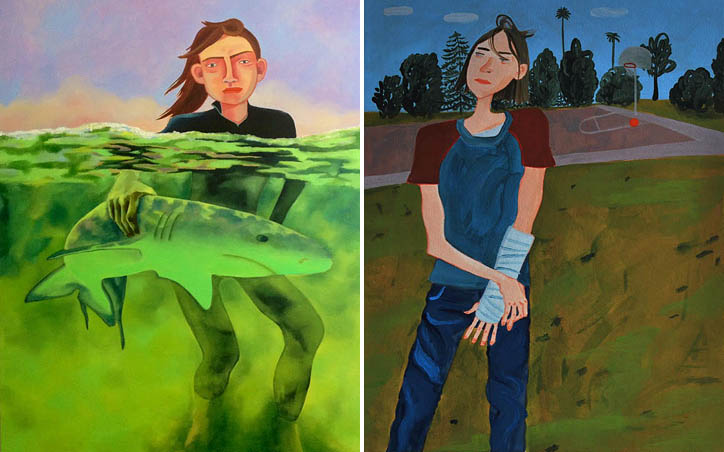