From Pr Icon To Businessman 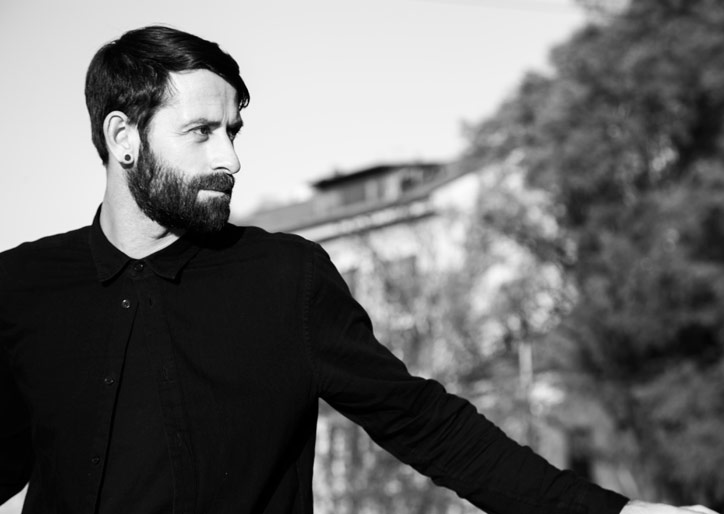 Coming from a hippy village of Patagonia, Argentina, he made his name conquering the capital of fashion of the Old Continent. Working young as a Club Kid in the early 90s he progressively evolved into a full time event manager, becoming one of the most requested PR icon in the fashion field. Based in Milan, since 1998, he then transformed himself into a highly requested DJ, a reliable creative director and a successful business man.

We met Marcelo Burlon in one of his favorite places in town, on the charming Naviglio Grande, to ask him about his peculiar story and his brand new t-shirt collection called County of Milan. Distributed in 310 multi-brand stores of the range of Barneys, Opening Ceremony, Selfridges, his label has already an annual turnover of 3 million euros. Let's question this Argentinian multi-skilled talent that seems that everything he touches, turns gold.

Tell me how everything started. I've read you came to Italy when you were 13 years old, in a small town on the Adriatic Coast...

First of all I'm from an Italian-Lebanese family which migrated in Patagonia in the 30's. So I was born there. In the 90s we came back to Italy, and that's where I started my career in discos. I quit school early because my parents couldn't afford to pay my studies, so at 13 years old I was already working in order to help my family. I started as a Club Kid, doing entertainment for the club nights dressing cool and eclectic. I was part of a crowd of people active in the Riccione area (Marche and Romagna). At that time, it was all about ecstasy, raves, illegal parties in the pinewoods; you know, the 90s...

How did your career evolve into professional PR?

At 20 years old I moved to Milan. At the beginning I was in the City just during the working days, trying to figure out what to do, while in the weekends I came back to the Adriatic coast because I still had a job which helped me pay my bills. Once I organized a party in my loft with a few friends and the whole Milan came. It was a huge success. In the crowd there was also the owner of the Magazzini Generali (a very renowned disco club in Milan E.N.) which remained impressed. He instantly offered me to work as a door selector for the coolest nights in town. It happened that lots of talented and influent people came there and became friends of mine. That's basically where I started to collect my very first mailing list, ending up doing PR for big fashion labels. The step to organize events and parties for other major brands was short. Now among my clients I can proudly count names such as Armani, Prada, Chanel...

Then you started to run your infamous Pink is Punk party...

At the beginning I was running another party called I Pretend to be a DJ where basically I was bringing fashion people to play as DJs for one night. We were doing battle of ipods and you could find Domenico Dolce competing with some famous speakers from the local radios. That's where I started to play music as well. Then, from 2007 Pink is Punk happened and became a weekly party where we mixed people from the street culture with gays and fashion insiders. Music moved from hip hop to electronica...now we're bringing this party all over the world.

The communication world has changed a lot during the past five years. Especially the dramatic influence social media has now on PR tactics. How does it feel to see people getting popular and acting like pros overnight?

There's space enough for everybody. In terms of parties this is good because people need alternatives, but also because sometimes competitors take unwanted people far away from my door (he laughs E.N.). In terms of professional PR I sell quality; my mailing list has very specific personalities and professionals; I am also a creative director, so during my events I can bring quality with my own production and ideas in order to shape the event with my own flair. I am very independent, I do a lot of things, and all the things that I do I do because I love it. When I decided to record my own music it was just for fun and then Mammaracho ended up becoming a club banger with 25,000 copies sold. Now I'm expressing myself designing t-shirts.

We're going to talk about that soon, but before let me ask you this: you left Argentina right before its economic crisis. I was wondering what about now; you 're living in Europe where situation is kind of going in a similar direction. What's your relationship with your home country?

Argentina is a nation that has always suffered economically. It can't be compared to other countries. I know its story very well because it's part of me and even if I'm far away I do care about it; I come back four times per year in Patagonia. I've collected a lot of historical documentaries about the crisis and the military dictatorship. It's my roots, It's where I come from, and I love to know about it; I have a library full of those documents. I'm afraid to say that the situation won't become better. People who have the power are ruining everything.

Let's talk about Milan what do you think of people saying that it has lost its power compared to the other fashion capitals?

Milan still have an important role. There's the industry here and there are a lot of companies that invest in the press. In Paris you may have much more historical maison, more creative freedom; while here fashion is mainly commercial and strategically market oriented. London, on the other side, is important for young designers who might find interesting deals with top companies. There's no competition. Every city has its pros and cons, its own peculiarities.

What about Tel Aviv. In 2012 you've been called creative director for the Gindi Fashion Week. How's the scene over there, and what did you do exactly?

There's a lot going on there. That's because Israeli people travel a lot and they have more financial possibilities. Plus they are really creative. Some designers are 50 years in the market, some others are really young, but their both considered and creatively fresh. I was called to give a twist to the event, preparing music for each fashion show and bringing the international press.

There's a lot of interesting people. In particular I love Dodo Baror and her Pas Pour Toi fashion line.

Tell me something about your “County of Milan” t-shirt line. Where did you find inspiration?

It's all about me: Argentina and clubbing culture. That's what inspired me to create those images. There are a lot of esoteric symbols as well as nature like condors, eagles, snakes. I researched many history books to find symbols of Mapuche and Pehuenche who where indigo people living in Patagonia that were fighting each other. I've learnt a lot about their cultures. It's basically club and rave culture mixed with those ethnic elements. I guess this generated something new and special because people really like it and copy it.

On the subject: I've already seen a fake t-shirt of yours...did you know that?

How does it feel?

At the beginning I was really upset. I thought that it was so complicated to start a company, to settle all the legal aspects of this business and then it felt like someone just arrived stealing my work. I wanted to sue them but after some research I realized that this was just a small company that only re-printed the wings on a basic t-shirt. The work was so amateur and badly done that I didn't even care to settle the lawsuit...

In a couple of your t-shirts you have an artwork inspired by the popular transexual model Lea T. Why that choice?

I love Lea. I accompanied her into her change of sex and identity as a friend. I think I've learned a lot of things in this process, maybe more than her. It was such a strong experience. Meanwhile her professional modeling career was rising with all the attention it generated. For me she's family, I even have a tattoo with her name on me. Also, I do think she represents an important part of society nowadays, that's why I dedicated two t-shirts to her. She's the voice for million of people who can't speak.

50 cent, Drake, Rita Ora, Pusha T, Devendra Banhart, a lot of superstars are already wearing your t-shirts. Do you gift them or do they buy it?

They all buy it! Except for Devendra who's a friend of mine.

Any plans to expand your brand? 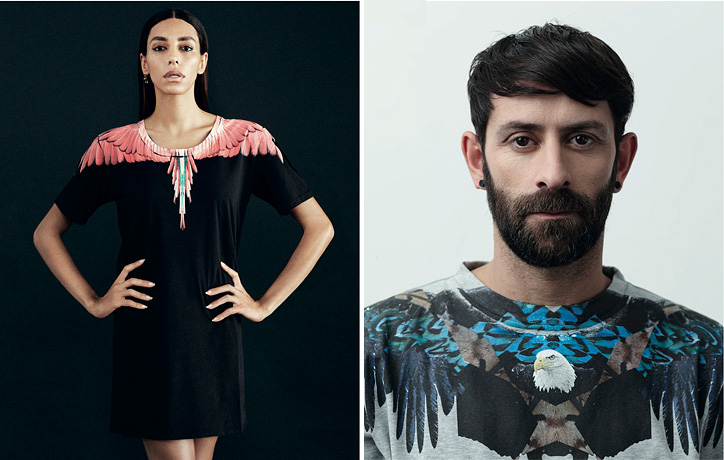 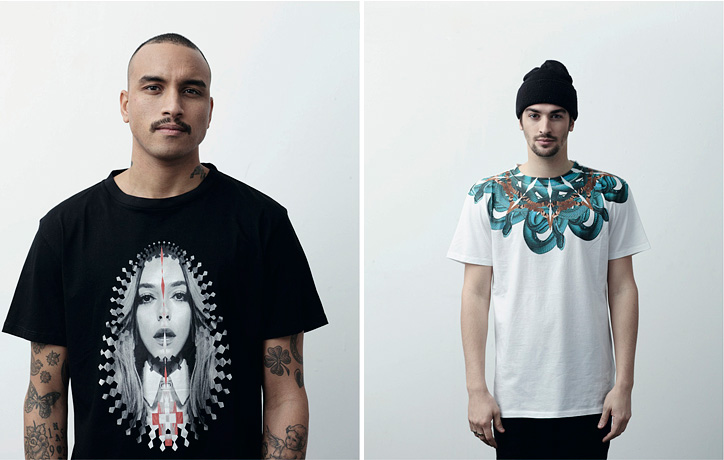