Music for after the world ends 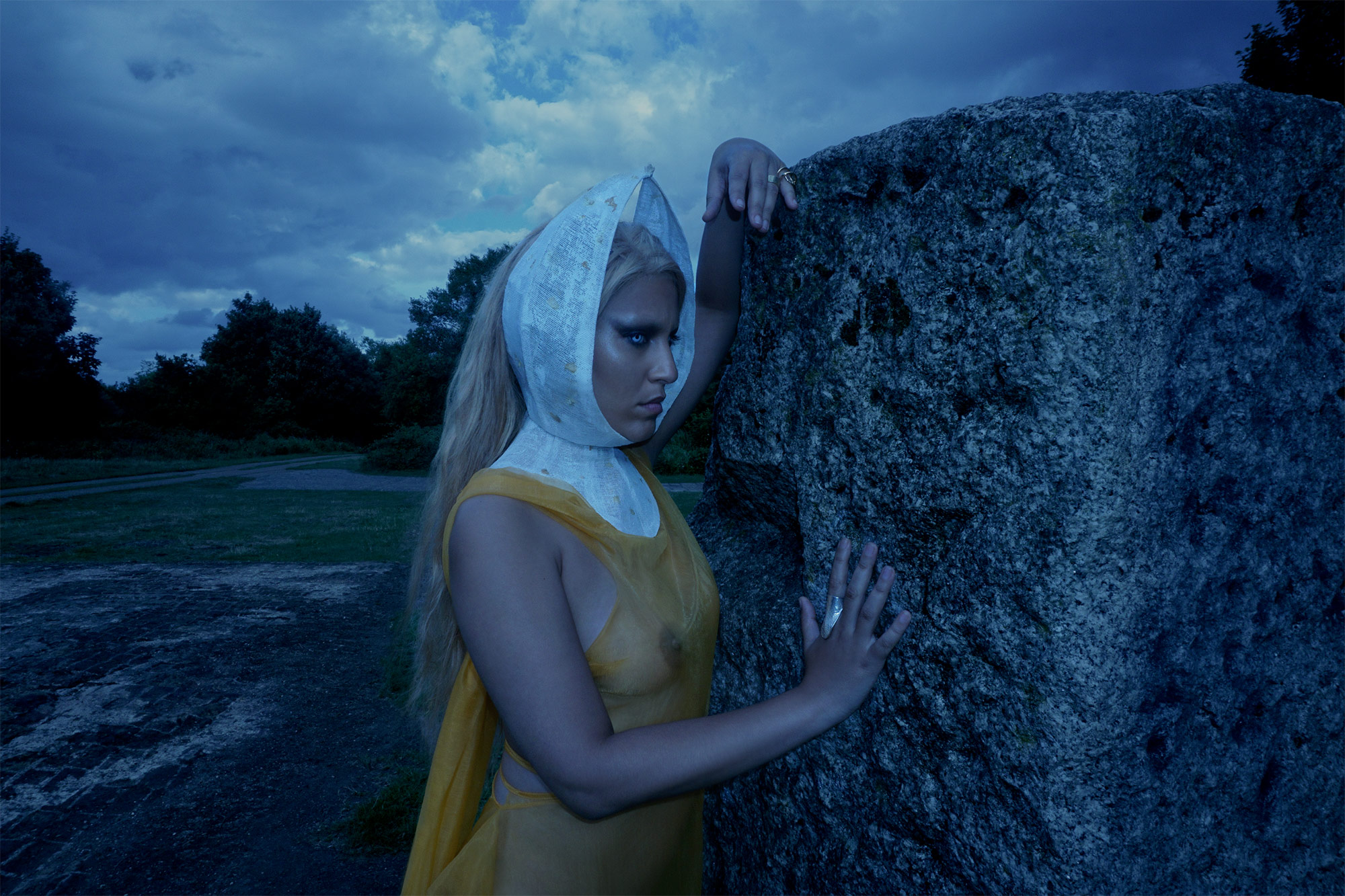 Some albums are more than just a collection of songs. This is the case with The Fifth Season, the latest offering and third album from French, Egyptian-Iranian singer, songwriter, producer, and filmmaker, Lafawndah. Her 2019 debut LP, Ancestor Boy, followed in the same vein as her earlier work, blending her eclectic mix of transnational influences with a more traditionally pop sound. The Fifth Season, although equally dynamic and just as striking, offers a different tone, one that is born from a long tradition of folkloric storytelling that celebrates light and dark, past and future, life and death.
It is through telling these stories, cloaked in songs that are at times otherworldly and others as intimate as a whisper in your ear, that Lafawndah paints the picture of a world where humanity, as we know it, is at the end of one chapter and the beginning of another. The Fifth Season, as I found out during our conversation, is a soundtrack for the apocalypse – and, as she reveals on the album, whatever lies beyond.

On October 25th, Lafawndah will be presenting live her new album on Mixcloud as part of the platform’s new ‘tickets’ service, which aims to help artists, DJs and producers in these troubling times for live music and events, as it allows creators to promote and broadcast their own pay-per-view streams through Mixcloud Live. Don’t miss the opportunity, and get your tickets here!

After first listening to The Fifth Season in its entirety, I was left with an overwhelming sense of curiosity. Each time I thought I had figured out the narrative of a track, something new would come along and lead me down a different path. What story is the album telling?
I haven’t had any control over the story it wants to tell. This is an album that birthed itself through me. But I think if you listen closely, you will hear that it’s telling about the end coming, over and over again, and about surrendering to that and trusting everything will begin again after the end.
Another thing I noticed was the pure variation in tone, with tracks transforming from enchantment into terror, heartbreak into triumph, within the space of a few seconds. Was this multitude of emotions planned when writing began, or something that happened organically?
Nothing was planned except being with Nathanial Cross, Theon Cross, Valentina Magaletti and Nick Weiss in one room.
Amidst an album oscillating with instrumental intensity and sonic experimentation, one track in particular stuck out to me due to its lyricism. Track three, You, at the End, recounts the tale of a girl who is seemingly impossible, her story made up of oxymorons ("Born blind, born seeing"/"Born of the first breed, born in the last days"). Are you the girl in question or does she represent something bigger?
She is not me, I’m just the narrator of her story. I love being the narrator to new mythologies. She is for sure bigger than me. 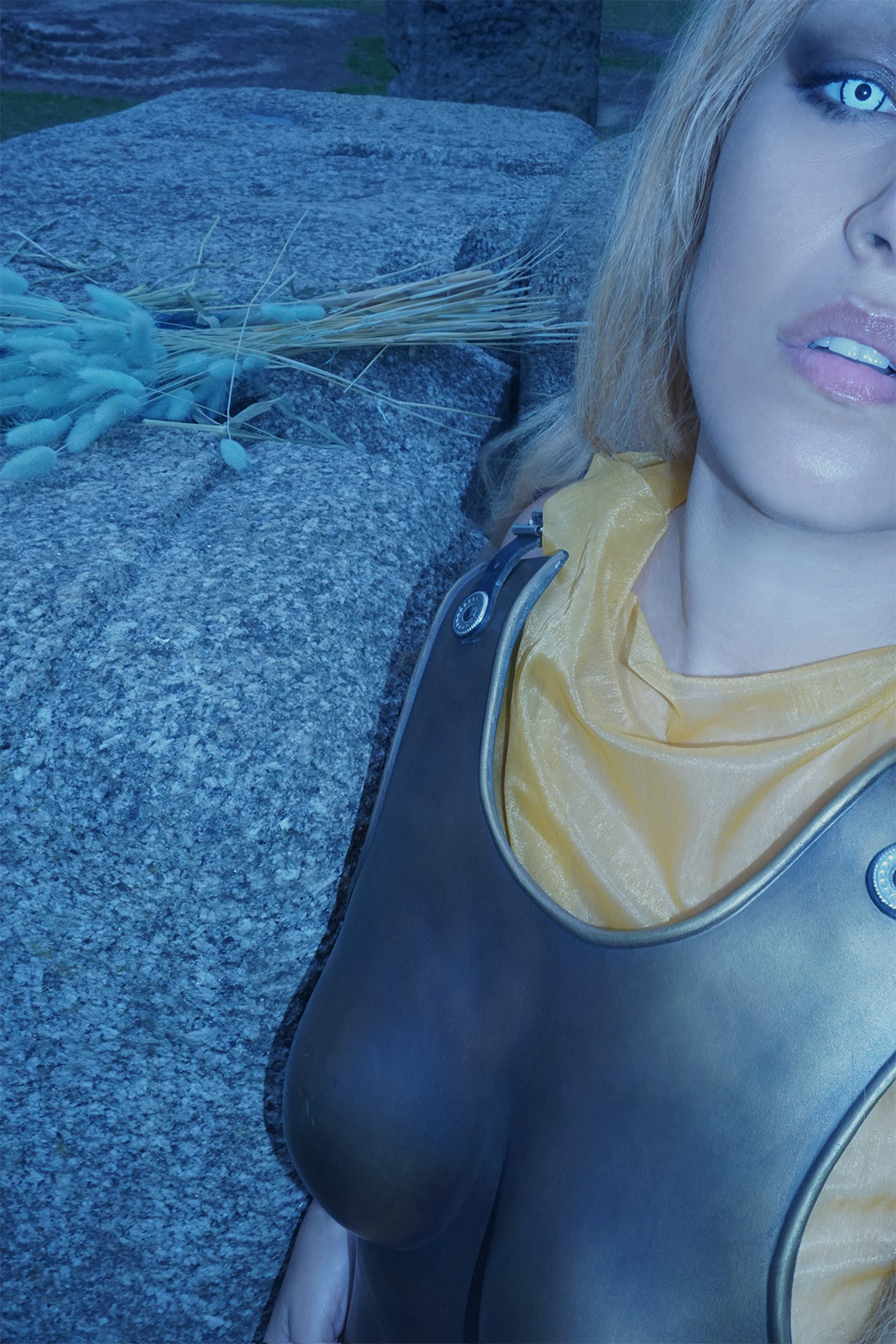 While the rest of the record is haunting in its vocal isolation, album closer Le Malentendu features an enthralling symbiosis with French rapper Lala &ce, offering a seductive call and response drenched in pensiveness. How was it working with Lala and the rest of the artists who collaborated on the album?
Fluid. An evidence. An obviousness. Le Malentendu was my first time writing in French. After I started, I realised this had to be a duet; it’s not a one person point of view, it’s a call and response. When that became clear, Lala was the one. I loved working with her. We just talked a bunch, told each other stories – very intimate ones. And then it got poured into the song. She has one of my favourite pens and favourite voices, and duets are underrated, so that was that.
On the subject of collaboration, over the years you have joint forces with an impressive cohort of musicians, through ventures such as your Honey Colony project and on tracks like Le Renard Bleu, which you worked on with renowned ambient artist, Midori Takada. Is it safe to say that you feel more productive when around other creative forces, or does your writing process involve solitude, too?
I definitely need solitude. In the process of my collaborations, there is also a lot of solitude. I don't feel more productive, I just find it more exciting and more potent to make things with people I love and admire. It makes the experience more joyful and it makes the music better, not because I couldn't do it alone but because it takes us out from what we know of ourselves. That's what I love the most.
If you pay attention, none of the people whom I collaborate with make similar music alone. It just becomes something else, and that something else will always be more exciting to me than the thing we know we already do and are already good at by ourselves.
Compared to your past works, such as the gloriously frenetic Tan EP, or your thunderous 2019 debut album, Ancestor Boy, The Fifth Season feels somewhat more sombre, wrapped in a tenebrosity that is perhaps born from a different place. Is this the case?
I would hope that any music I put out comes from a different place every time. Otherwise, that would mean stagnation. I hate stagnation. I think about my state and what I put out into the world as tectonics plates, like in the book The Fifth Season. It’s geological, therefore alive and in movement at all times.
I don't find my new record sombre. I find that there is a lot of light in it, actually. And I feel like it tells a story; you can't think of stories as happy/sad, dark/joyful. All of it is in there. I think about this record as the music for the day after the end. 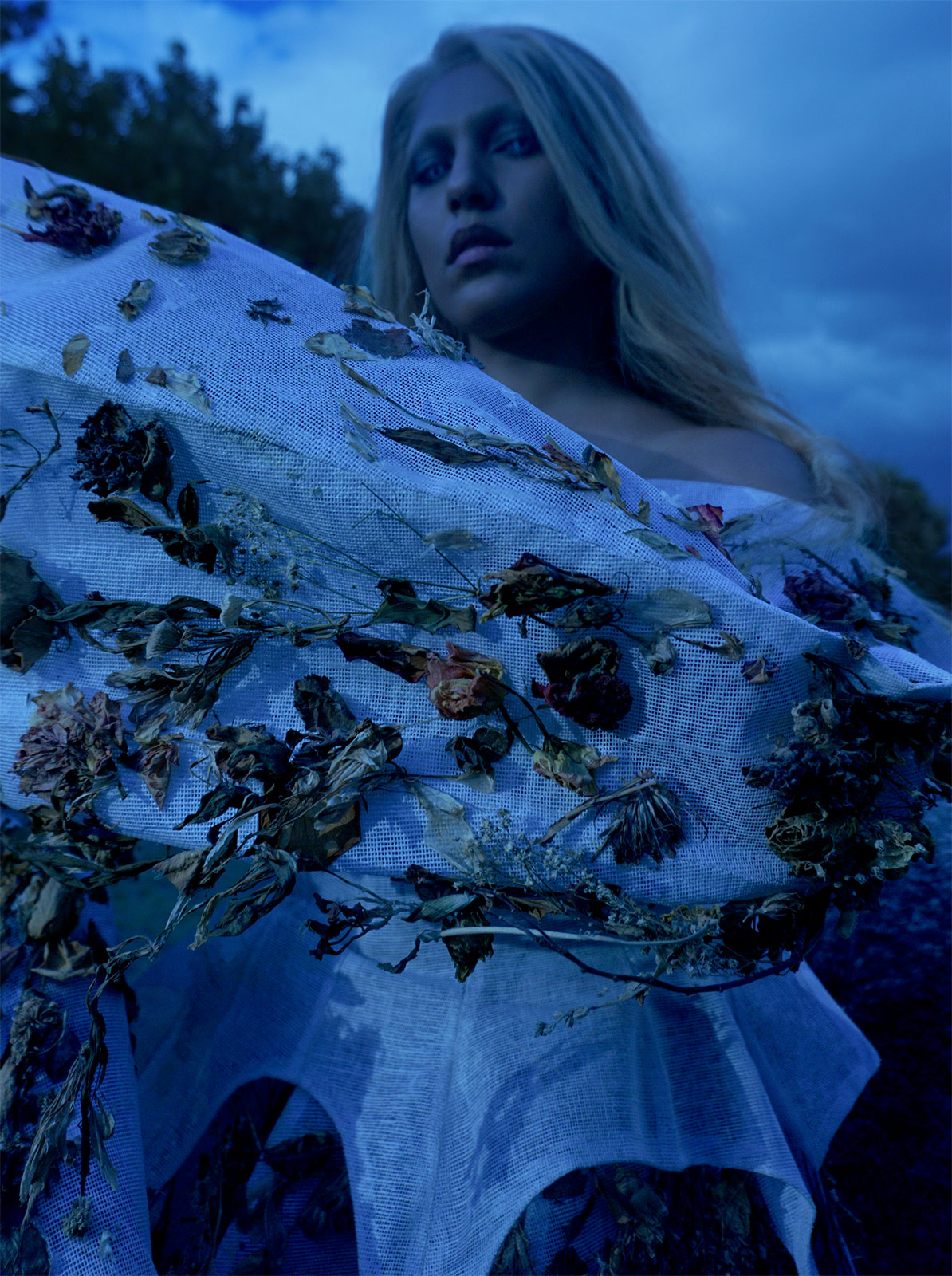 Your visual style is as powerful as your music. Do you see your aesthetic as being an equally important medium?
I'm a storyteller. And I use all the tools that I have to tell the stories. There is no one tool overpowering another. They all serve the story.
This compelling eye for visuals can be seen in the music videos you have directed for past singles, such as the incredibly moving Joseph and the Daddy video, which involves a poignant dance sequence between yourself and your mother. Can you see yourself further exploring film as an artistic vehicle in the future?
It has been a vehicle since the beginning and I am writing my first film at the moment, then the ratio will be inverted. I’ll be scoring my film instead of making a film for my songs. Film feels like a very natural way for me to tell the stories and it's crucial that there are more of us out there making films, more of the people who are usually imagined by others.

Speaking of the future, what comes next? You seem to be an artist who is constantly creating in one way or another.
An opera, a film, a lot of collaborations where I’ll be producing for other people, new involvements in real life matters. 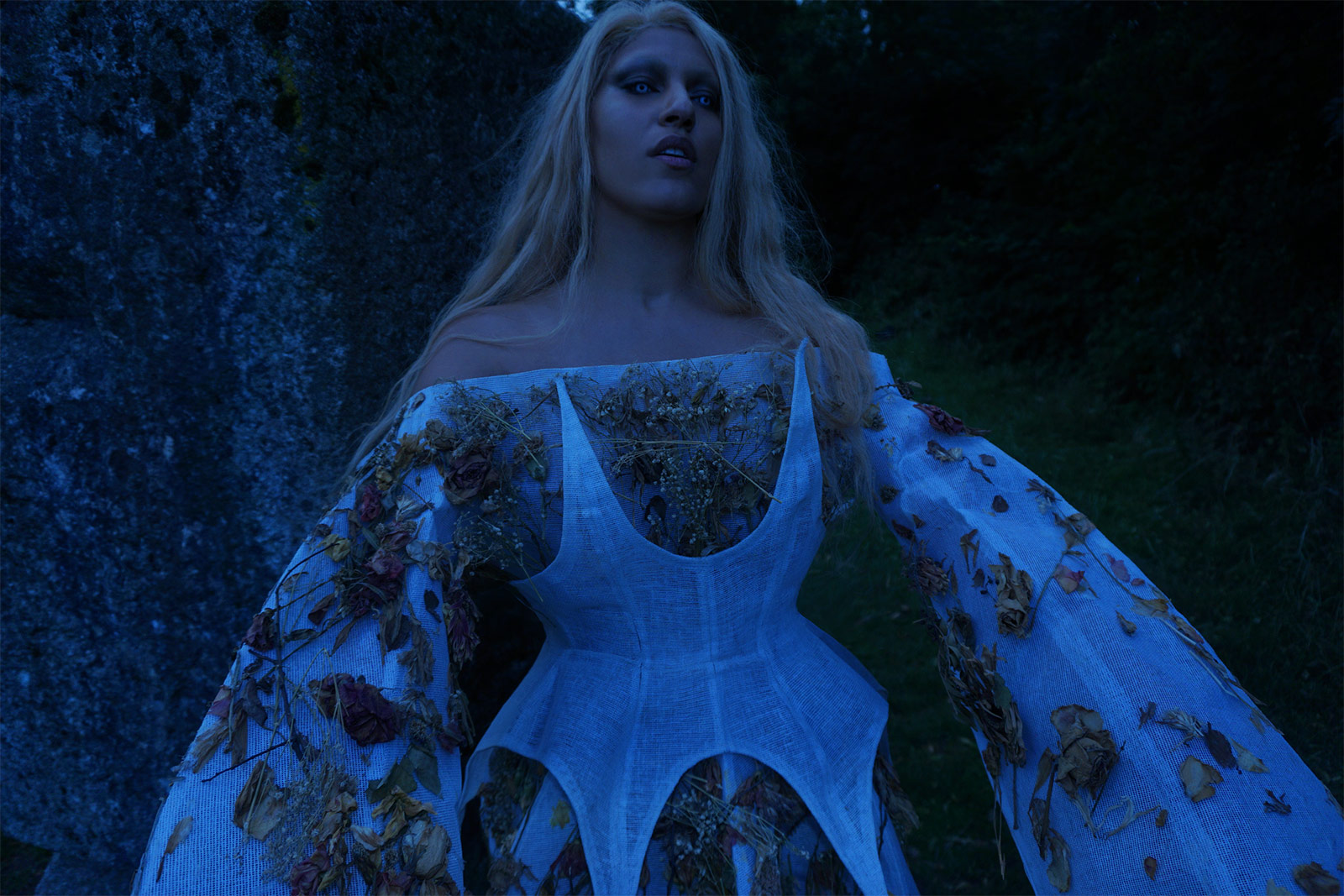