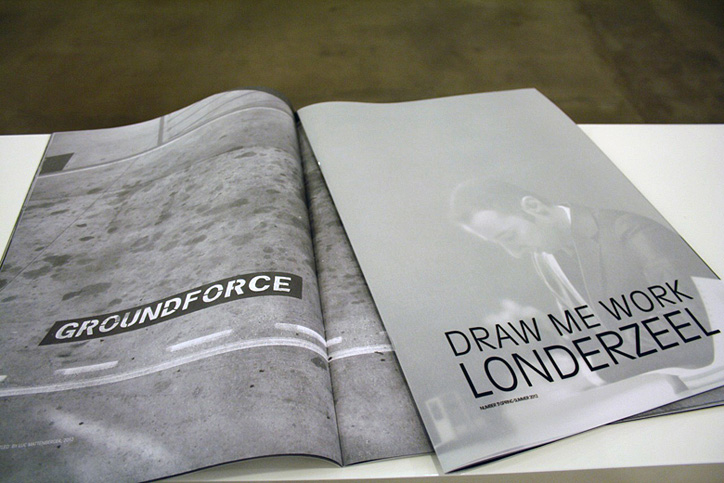 As the creative director of Dior Homme since 2007 and his own self-titled label since 2005, Kris Van Assche has gained an impeccable reputation for accentuating craft and defining ‘nonchalant elegance’ and luxury through his refined collections of exquisite detail.

Prior to attending Antwerp Royal Academy of Fine Arts and later relocating to Paris where he would become Hedi Slimane’s protégé as first assistant at Yves Saint Laurent and later Dior Homme, Van Assche grew up in a small remote village in Belgium by the name of Londerzeel. Despite being a place completely detached from the artistic and influential world of fashion in which the designer is currently so prominent, Londerzeel ironically shares its name with the publication that he and curator/gallerist Barbara Polla launched as a way to communicate the contemporary universe of Kris Van Assche that differs so considerably from his childhood village. Born out of both Van Assche and Polla’s infatuation with exploring the boundaries between fashion and art, the publication unearths this creative world with a beautiful poetic vision. With illustrious contributors stemming from a variety of fields, Londerzeel presents a highly perceptive and eclectic mix of innovative content, drawing on captivating thoughts and sentiments. In the lead up to the launch of the publication’s upcoming issue, Draw Me Work, Kris Van Assche and I had the opportunity to talk over some of the ideas and concepts explored in Londerzeel, how one can interpret the publication and what to expect from the forthcoming issue.

In the editor’s note to Issue 2 of Londerzeel, Draw Me A Gaze, it reads: “We should be able to read fashion – including the invisible choices that have been made to create any garment.” Have you created the publication to enable one to do this? How does one ‘read fashion’?

Londerzeel was not created for this purpose – it was created out of curiosity, pleasure and desire – but as any unconventional approach to the language of fashion, it does contribute to the “reading of fashion,” or more precisely, the reading of “my” fashion.

Is the publication essential in order to fully understand and appreciate your work as a designer for both your own label Kris Van Assche and Dior Homme? In other words, does Londerzeel complement and accessorize your design work or is it a more independent, separate project?

It is both complementary and separate. It is complementary because it uses the same ideas and inspirations I work around in my fashion. It is separate because it talks much more about the work of others than it does about mine.

What term would you use to define/categorize the publication?

Londerzeel is a publication on art and fashion. Both Barbara Polla and myself are fascinated and inspired by the boundaries between these two fields and tend to investigate them in a very unconventional manner, working with artists, photographers, a graphic designer, writers, art critics... Londerzeel is about the Kris Van Assche universe, a universe that meets many others, crosses over many fields, and includes constantly novel people, ideas and artworks.

The Kris Van Assche customer is referenced and discussed in the publication. In Issue 1 of Londerzeel, one who wears Kris Van Assche is said to embody both Hamlet and Lady Macbeth. Is the magazine directed at those who wear your designs?

What feelings do you have towards the town in which you grew up? And in what way is Londerzeel and the person that you were when you lived there, significant to the concept and ideas of the publication?
When we say, “about people we love and were in Londerzeel before” – this means the artists and people who have been in the magazine before, like Paul Ardenne, Ali Kazma, Andrea Mastrovito and Matt Saunders. We love the people we work with for Londerzeel! And some of them, like Andrea, have been in all issues. But note that there is nothing nostalgic about Londerzeel. We are in my current universe, far away from my remote childhood’s village. It was actually Barbara Polla who came up with the name. She visited Londerzeel at one point and concluded it was such a boring village, it was no wonder why I escaped. It is the place where everything started: the desire for beauty, creativity… It is therefore a symbolic name.

Why was the decision made to produce the publication in newspaper format sans advertising?

What ideas and principles will the forthcoming third issue, Draw Me Work explore? What does the title mean?

I have always been inspired by men at work. Even in my very first show, work-wear elements were prominently present, and they have always been more or less on the surface. One of those shows actually inspired the art historian Paul Ardenne and Barbara Polla to co-curate in 2008 a very important show entitled Working Men, which explored the current representations of work in contemporary art. (Ali Kazma and Tuomo Manninen were in that show). It all resulted in the book written by Ardenne and Polla on the same theme, Working Men. Londerzeel 3 thus represents a natural continuation of my fascination for the working man. Not to forget about fashion design and art, they also are “work.”