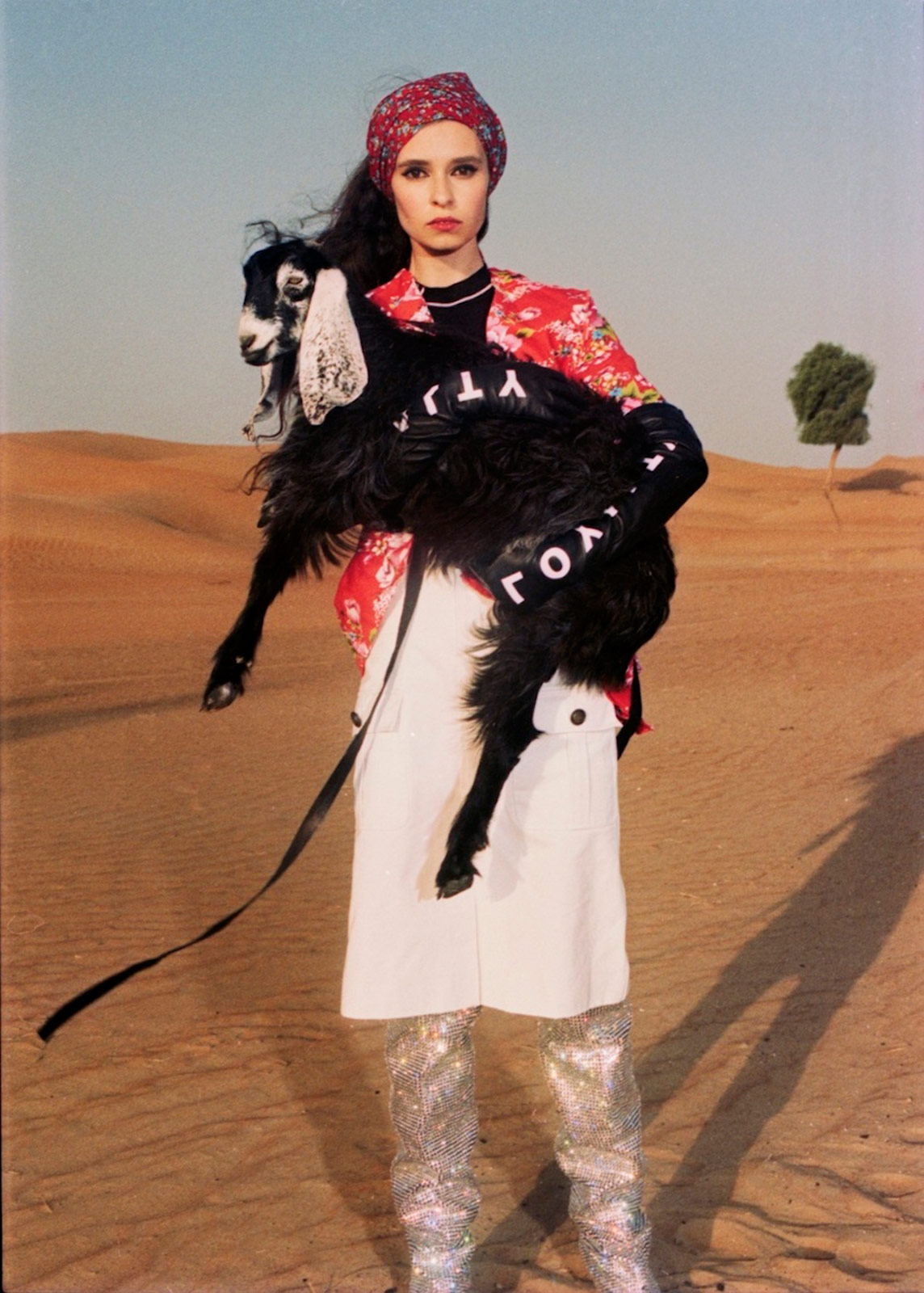 It all happened one afternoon, when, finding himself all alone at home, little Keanoush da Rosa entered a world of dusky-eyed cupbearers, drunken poets, and the most bewildering sets of eyebrows he’d ever laid his eyes on. Or, perhaps it happened far before that. Perhaps, unbeknownst to he himself, there was something in his bones, in his blood, that thirsted for his ancestral Iran – the land of the Aryans, of the Lion and Sun, of roses and nightingales and wandering bards. As per the Persian proverb, when exactly Iran set Keanoush’s heart aflame is known to none but God and Hafez of Shiraz.
Some, like me, translate this congenital, undying love into prose, poetry, and other such pretty little things. Aside from words, however, there isn’t much to feast your eyes on in my case. Fortunately, however, there’s Keanoush Da Rosa. Having experimented with a plethora of styles, themes, and aesthetics throughout his short, yet fruitful career, the young fashion stylist has, in recent years, turned his attention towards Iran.

Think sultry, limber belles with sormeh-rimmed eyes, pomegranate-strewn sets, an edible array of colours, and all the swagger and oomph that Iranians have, since the times of Herodotus and Xenophon, been famous for. It isn’t only Iran’s illustrious past he’s interested in, though; he also harbours an affection for contemporary Iran in all its beautiful pandemonium and complexity. And, to top things off, he’s recently relocated from London to Dubai, in the heart of the Persian Gulf – just a stone’s throw away from his beloved homeland.

To find out about his love affair with Iran and how it’s served as the impetus for some of his recent shoots for publications such as Vogue Italia, I caught up with Keanoush for an exclusive interview. 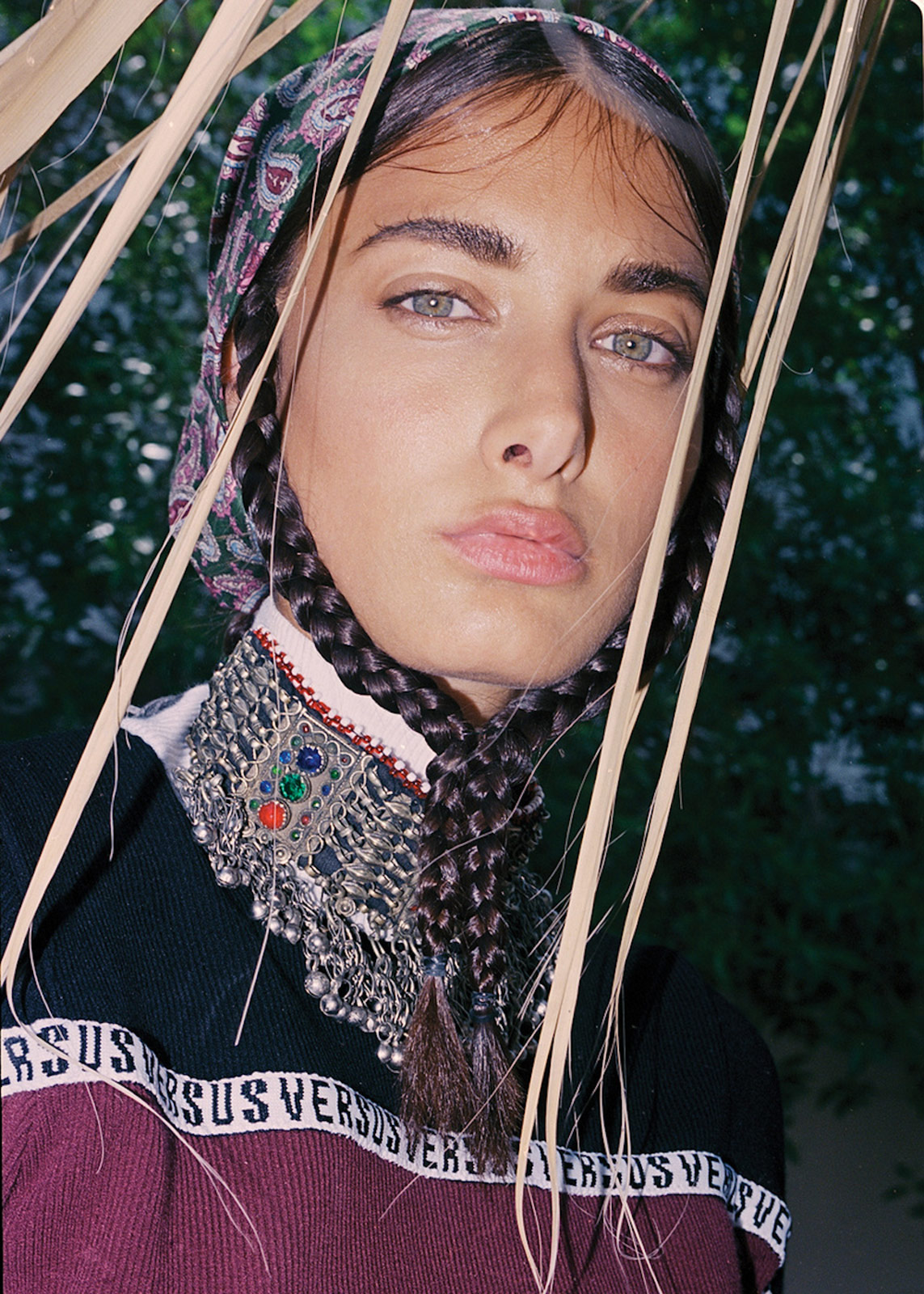 You’re of mixed Iranian-Brazilian descent and grew up in England. What’s it been like juggling – for lack of a better word – these different identities? As well, I’m curious to know if you’ve noticed any similarities between Iranian and Brazilian culture. As you know, the southern Iranian city of Abadan has quite an affection for all things Brazilian!
I feel really proud to come from two beautiful cultures from both of my parents’ sides. I grew up practising Brazilian and Persian traditions, which couldn’t be anymore different; however, the things that connect them for sure are the passion and pride I have for the love of bringing the family together; that, and the use of turmeric in cooking, and – well, of course – the fanatical love for football!
Growing up in the United Kingdom allowed me to have a more open-minded view of both myself and the cultures around me. Anyone who grew up there knows about the wonderful diversity you are constantly surrounded by. With that being said, I would always find myself going through this mixed-race struggle trying to discover who I was and where I came from. On many occasions, neither Persians nor Brazilians would accept me, as I didn’t have the ‘typical’ look from either background and my accent was so British, which never helped, even when speaking either language.
How did you come to be a fashion stylist?
I started with photography at first, which didn’t last too long. I also used to skate a lot between the age of fourteen and seventeen, and all the while during that time, I was surrounded by a lot of creative individuals. One in particular, who always kept me inspired, was Noreen Khan, she would always encourage me to keep pushing and never give up. During the week, I’d be doing my GCSEs and A-Levels as most people my age, and on the weekend, try to engage in fashion as much as possible.
Originally, I was going to study languages or geoscience at university, but somehow got into painting accidentally, which led me to major in Fine Art at Central Saint Martins.
Although while studying I was working as a stylist on the side – which was tough at times, especially when it came to writing my dissertation – I knew I had to prepare myself during my degree to go straight into employment after graduation. A lot of my classmates would see me coming into the studios with suitcases of clothing from brands and then rushing to a job straight after a lecture. When I graduated, I decided to continue being a full-time stylist, which was very challenging at first: it’s very competitive in London to get creative work, as you’re constantly competing for the same jobs with more than two hundred other stylists. Then, in September 2017, I decided to come to Dubai to have a more successful career here. I would definitely say the whole process of going into styling was very organic.
Your portfolio is quite eclectic, to say the least. Aside from working with numerous motifs, brands, and publications, your work is also very culturally diverse. You have, for instance, Chinese, Korean, and Arab-themed projects. What I find particularly interesting, however, are your Iranian ones, which are quite recent. What prompted you to start employing Iranian aesthetics in your oeuvre?
My father was always very keen in showing off about how proud he was of his country’s history (as are most Persian fathers), so I’ve always had that knowledge since I was young. I also dedicated a lot of time to researching Persian history from the Safavid (1502-1736) to the Qajar eras (1785-1925) in my first year of university. In my final year, I spent a lot of time reading the Koran and learning all about the 1979 Iranian Revolution, which became the main topic of my dissertation. This, in turn, sparked a lot of interest in understanding more about my culture, and I realised then that while I was studying my country’s history, I could also incorporate elements of it into my work. I am very proud to be Persian. A lot of the time, people concentrate on the negative aspects of my country, but I feel it’s important I do the opposite. 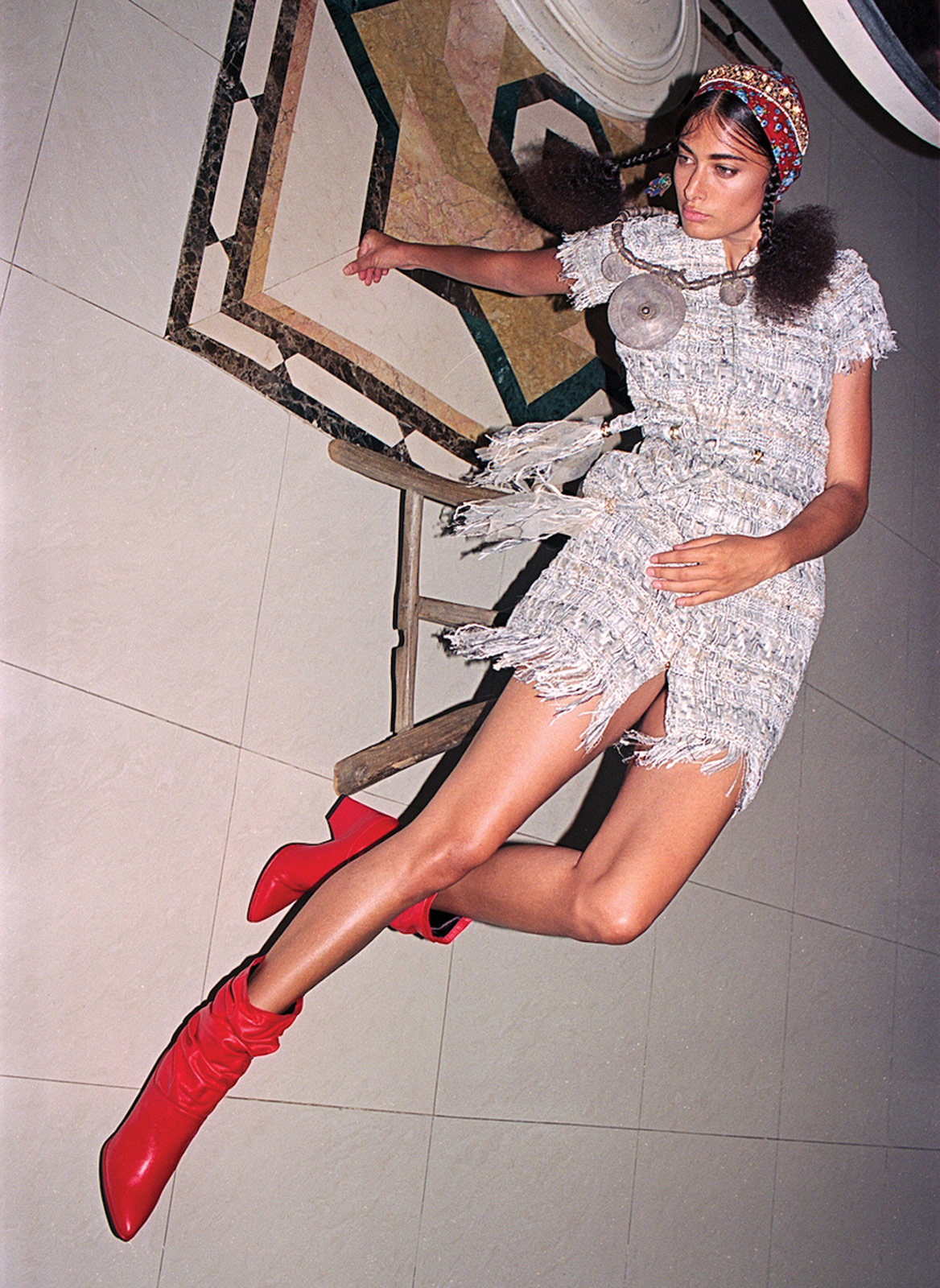 I love how you’ve managed to incorporate so many different facets of Iranian culture in your photographs. The Peace series is all about Qajar-era art, while Modern Musings and Love take their cues from nomadic and contemporary Iranian culture respectively. What sorts of Iranian art and aesthetics mainly inform your work?
I’ve had an obsession with miniature paintings and traditional Persian poetry ever since I was young. I was very fortunate to grow up in a house full of Persian art and carpets everywhere. There was this one room in my house reserved for mehmoonis (traditional gatherings) that was covered in artwork and antiques, and I would sneak into it when my mother wasn’t home. I’m also fascinated with the Qajar era, as I think it’s so beautifully documented in photographs, and the sense of style is phenomenal, so punk and avant-garde, in a way. I also find the beautiful curves and designs of Persian mosques to be really inspiring in my work.
Now, I know you focused quite a bit on classical Persian poetry and Iranian history during your time as a fine arts student, but have you ever visited Iran?
Yes, many times. I spent a lot of time in Iran as a child. It was a second home for me, in a way. I haven’t visited it since I was eight, but I’m already planning a long-overdue visit sometime this year. I would need at least two months to get through seeing everyone in my family!
Tell me about it. Do you think your physical distance from Iran, as well as your Western upbringing, have played a role in your fascination with Iranian culture? I know they certainly have in my case. I think things lose a lot of their charm when they become too familiar. I could be wrong, though; after all, traditional Iranian aesthetics are very much in vogue in contemporary Iranian fashion and design now.
I think the root of my fascination with Persian culture has to do with the fact that, as a country, Iran remains more like something of childhood nostalgia for me. Because I have this distant memory of it, I feel more inclined to understand more of my past and heritage. However, growing up in the United Kingdom, we would continue Persian traditions a lot, such as Norooz (the Iranian New Year) and Yalda (the birth of Mithras on the eve of the Winter Solstice). Mehmoonis were also a monthly occasion a lot of the time.
I definitely miss mehmoonis a lot. As a Persian child, I would always look forward to playing with our cousins and watching my aunts Fariba and Roya singing to Googoosh, while my uncles got very drunk and forced us to dance with them. Of course, the food being the best part, koobideh and shirin polo were always the highlights of the evening!
I think I may have got too excited talking about mehmoonis. Going back to the question, it’s great to see fashion pioneers such as Hushi, who’s inspired me ever since I discovered his work. He is by far the most talented designer and contemporary creative within the Persian community I have ever seen, even though he’s been working since the nineties. I had the honour of collaborating with him for my Peace series for Vogue Italia, which, styling-wise, is one of my most cherished projects. 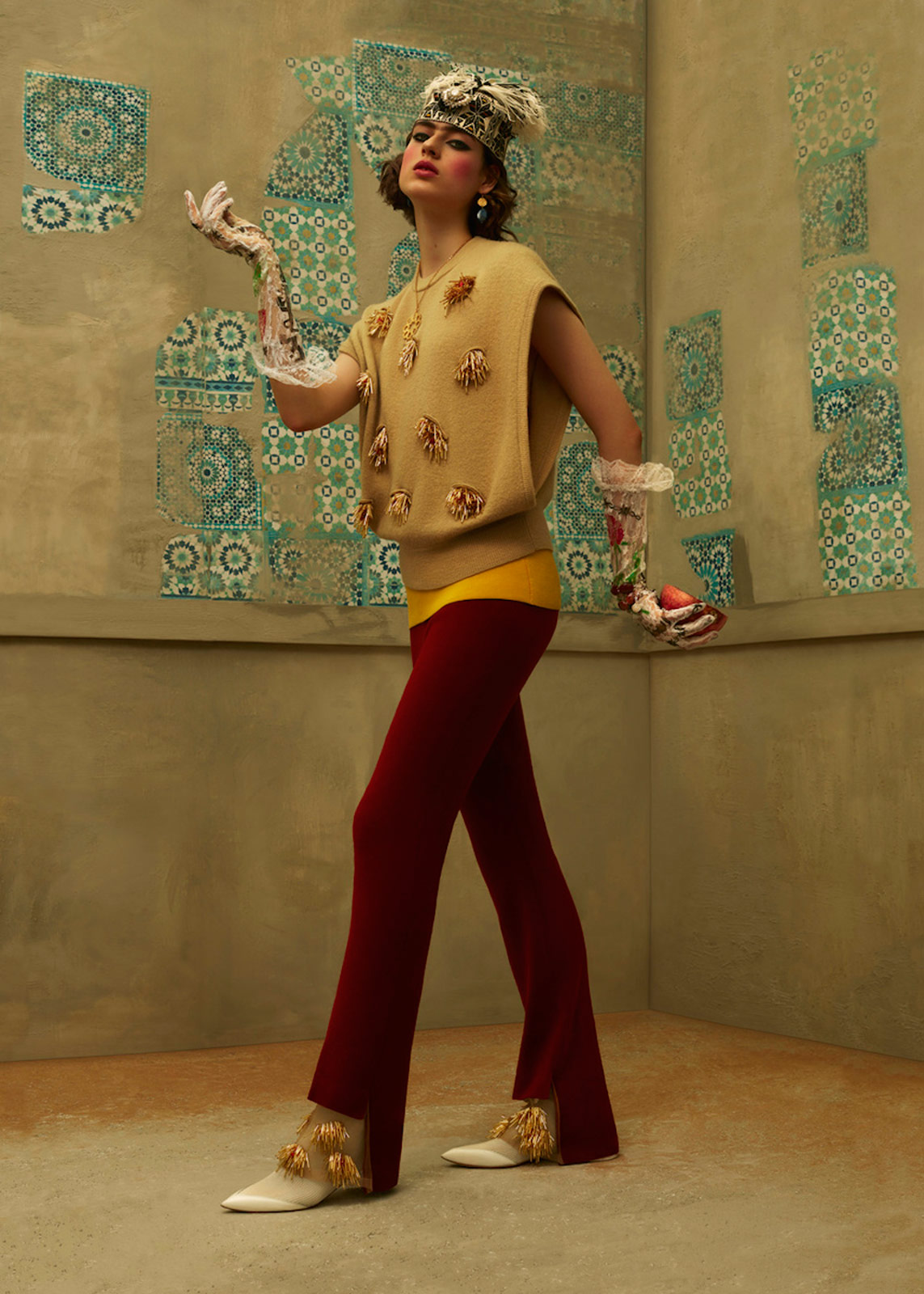 Hushi is brilliant, there’s no question about that. Now, would you say your Iran-related work has been helping change misperceptions of the country? Or is it more of a personal journey? Aside from the Love series, most non-Iranians wouldn’t be able to pick up on the references in your photographs, as it hasn’t been explicitly mentioned that, for instance, you’re making nods to the Qajar era in Peace.
I would love to believe that when the public views my Persian series of works it shapes a more positive view of Iran, as that is the primary reason behind my motivation. However, it is also a personal journey, as you say, because, like most artists, I try to create work to better understand and also research particular themes I feel so passionate about. 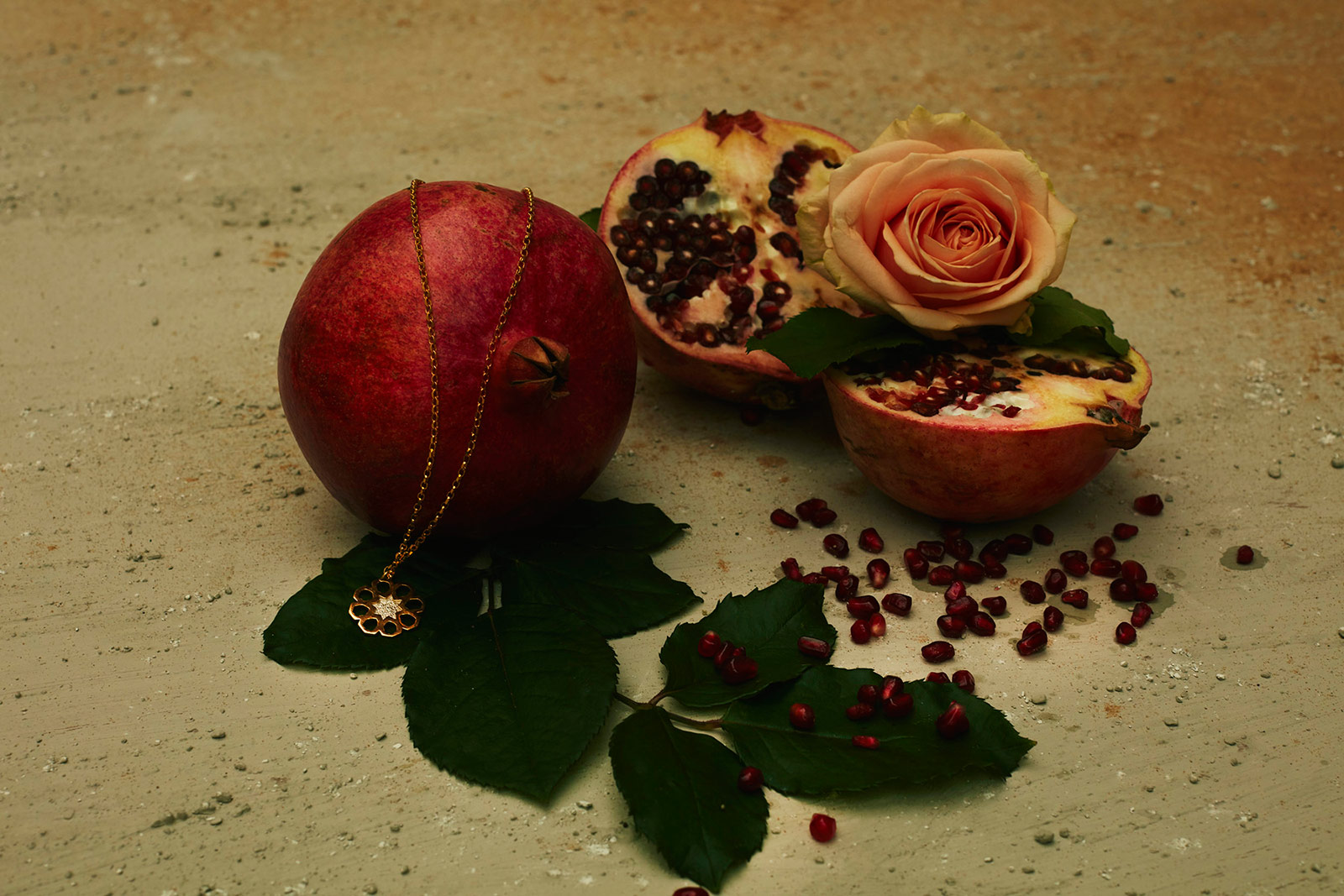 How has your understanding of Iran changed throughout the years? What role have your recent Iran-themed projects played in your appreciation of your Iranian identity and heritage?
I’d say the level of appreciation is the same. The only thing I would point out is a greater intellectual understanding of the culture and history of Iran. Before, a lot of my opinions surrounding Iran were at times negative; but I matured and learned to see the positive aspects of the country instead of concentrating on its flaws.
My recent projects have informed a new way of approaching my research in Persian identity, in both understanding myself as an Iranian, and, on a grander scale, the implications that my work can have in the public eye.
Describe Iran in a sentence.
“Your task is not to seek love, but merely to seek and find all the barriers within yourself that you have built against it.” Rumi
Ooh la la! Ok, and now: what’s in the pipeline for you? Can we expect to see more Iran-themed shoots?
I am already in the process of planning another project to be shot in Azerbaijan (the country; not to be confused with the historical Iranian province) in a secret location. Strong inspiration has been taken from Safavid dancers and hopeless romantics. For me, because I take so much pride in creating Iran-themed works, it can take me up to three months to plan them, as I want them to be exactly how I envision them. 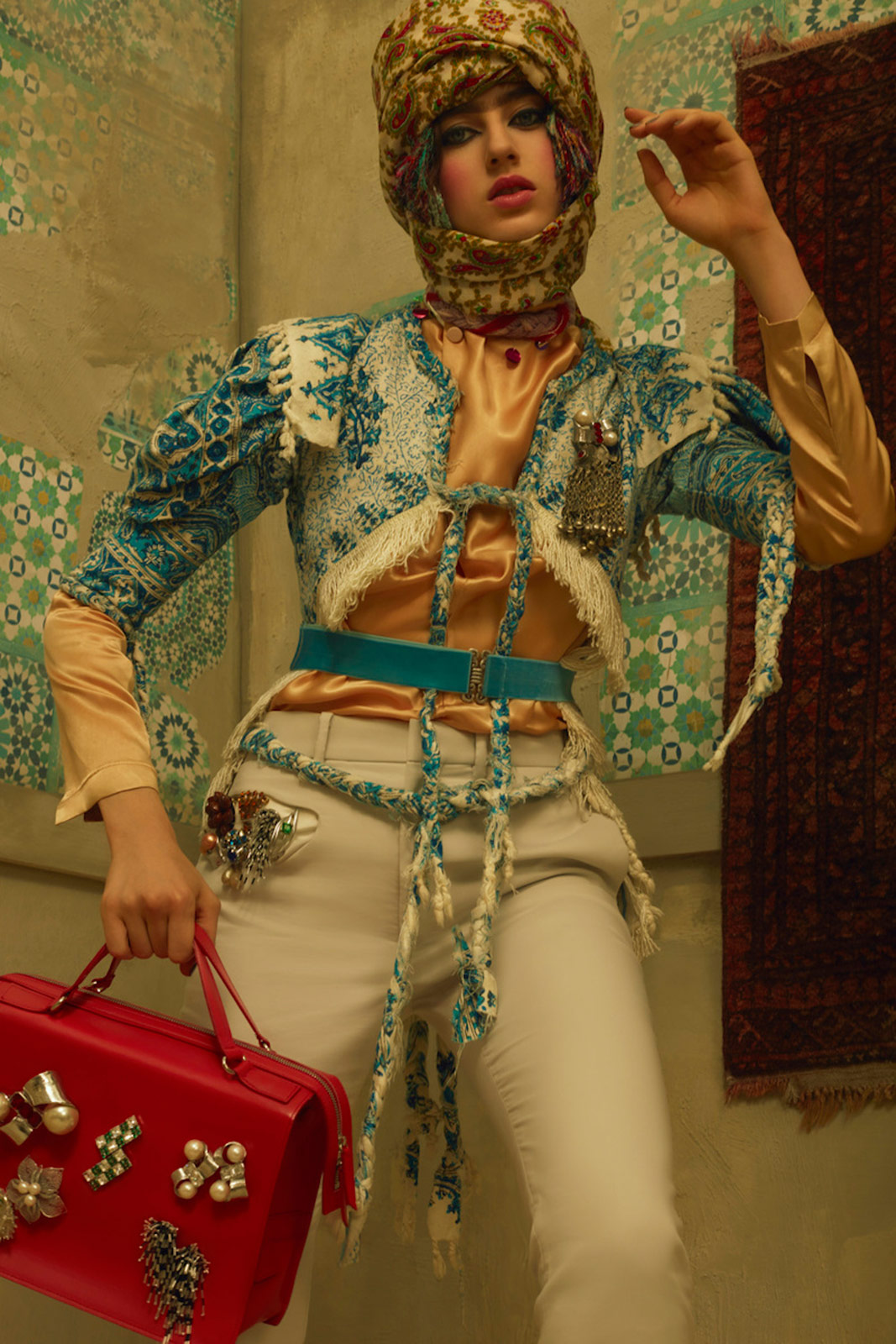 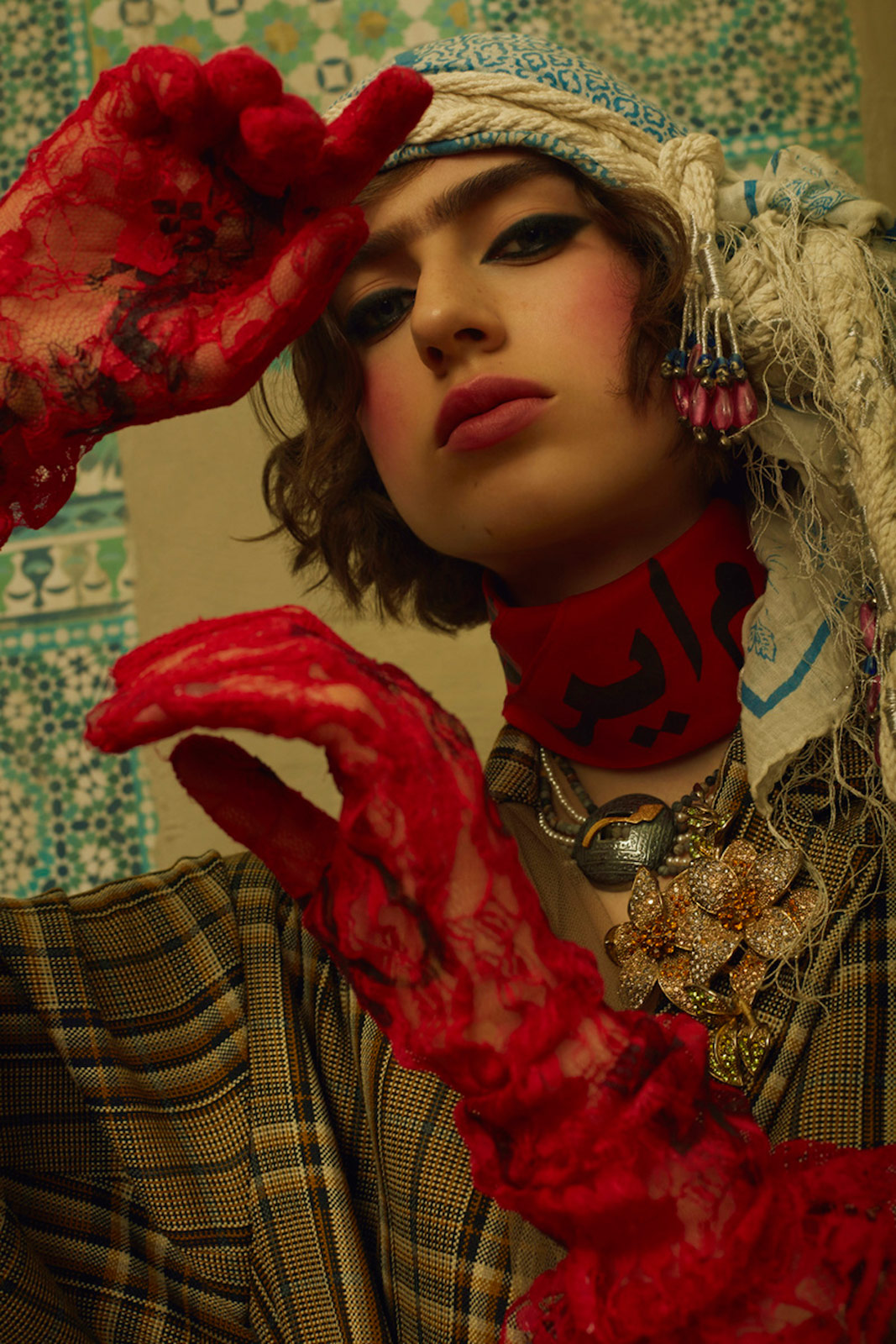 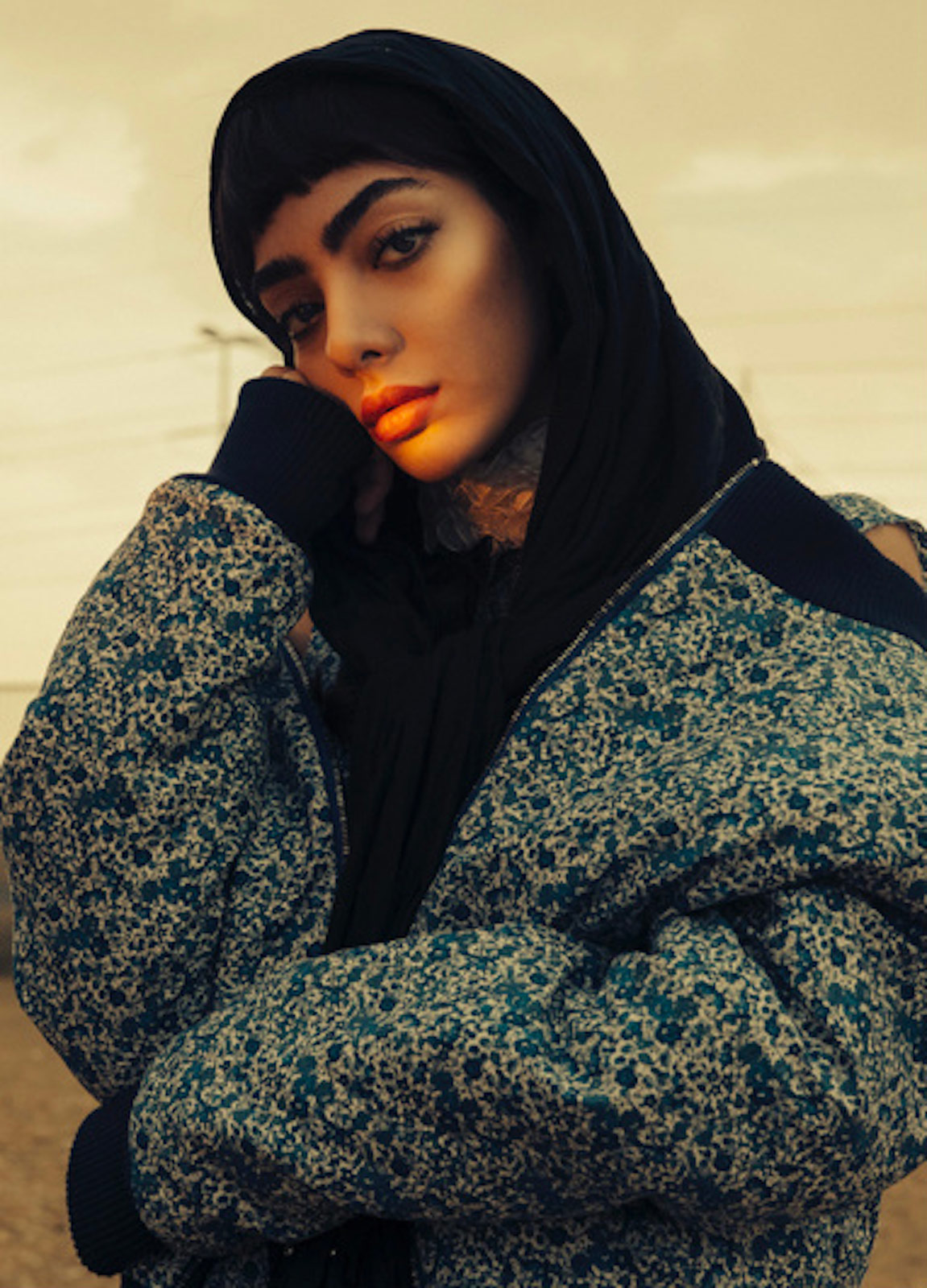 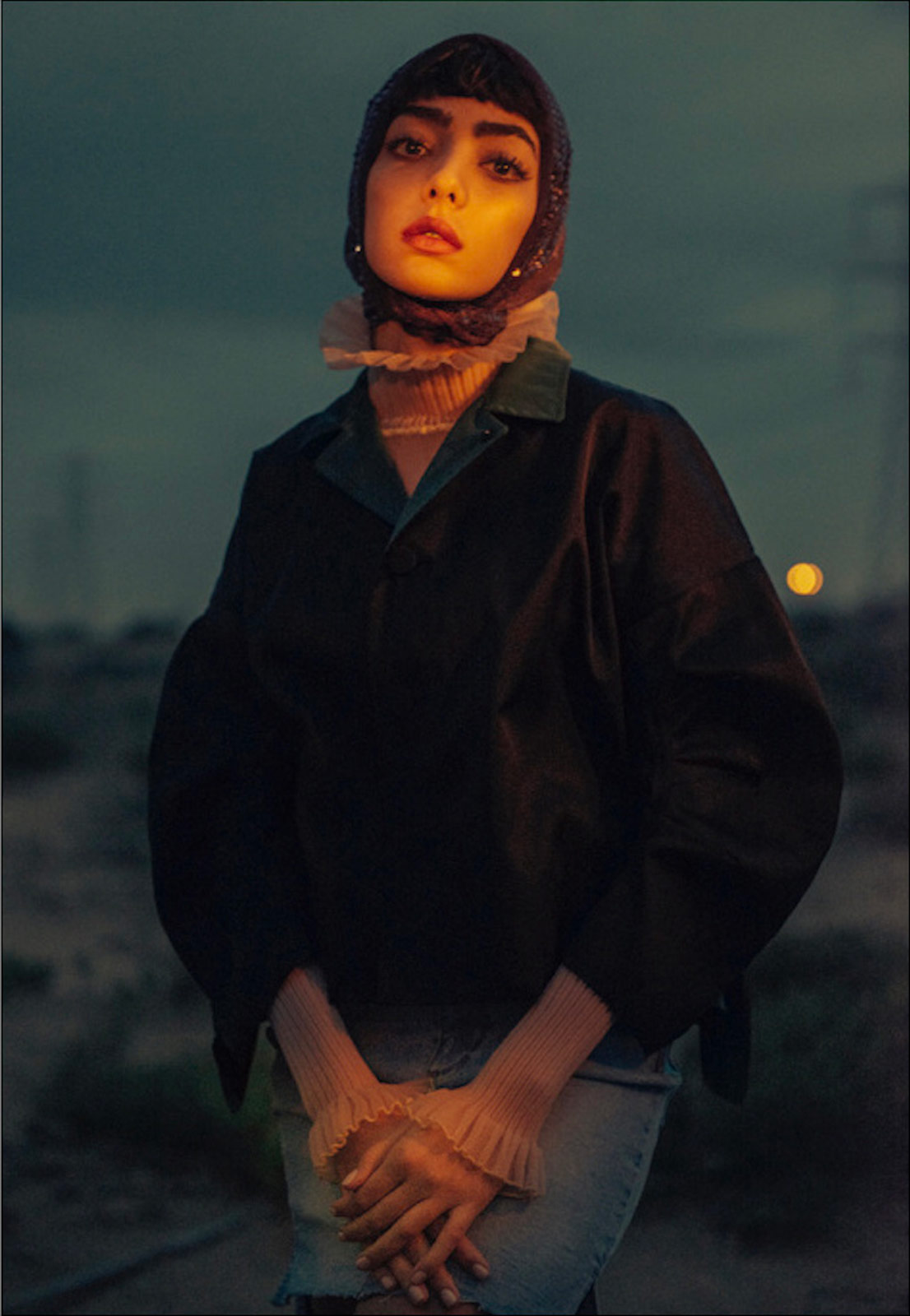 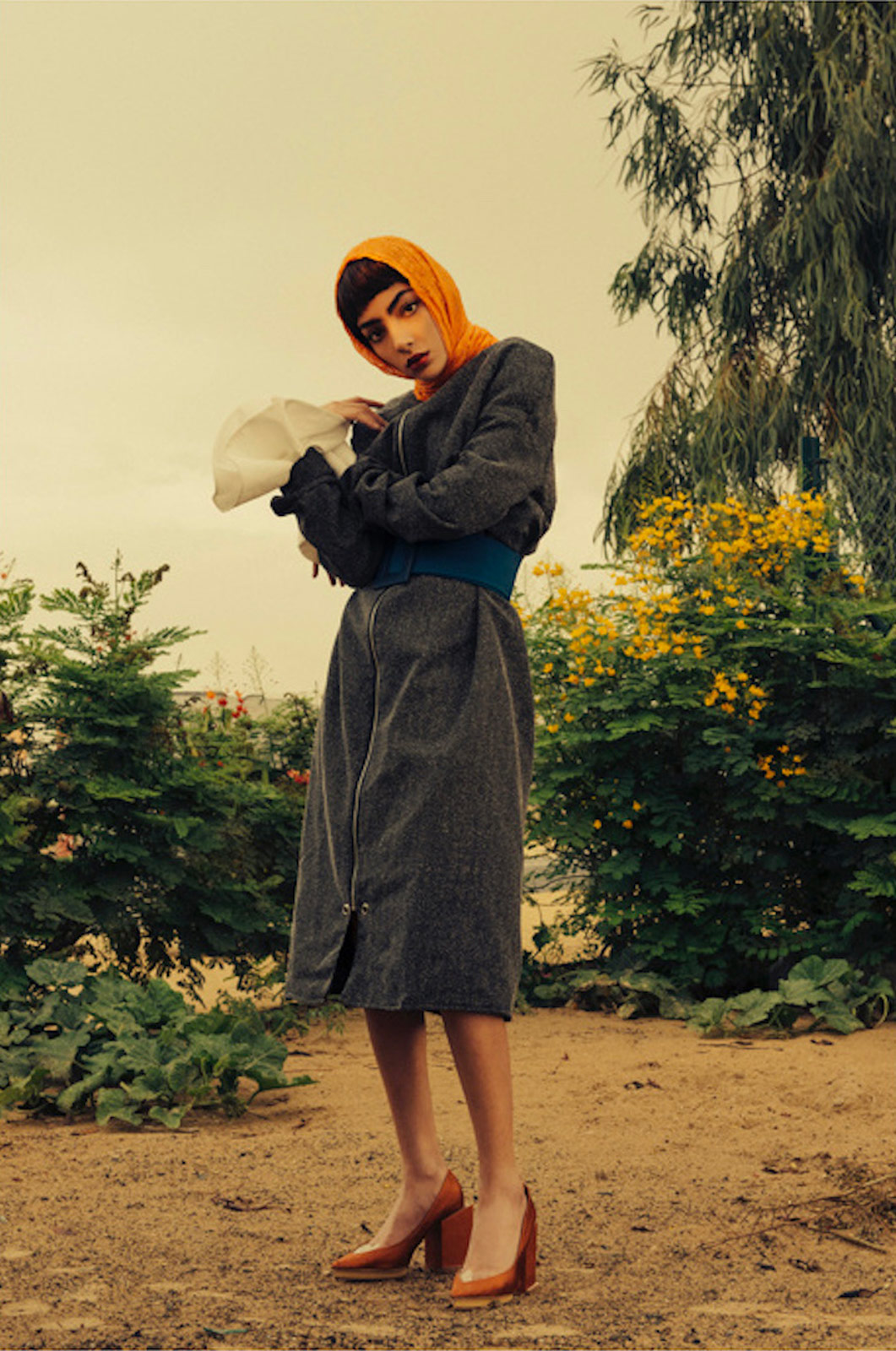 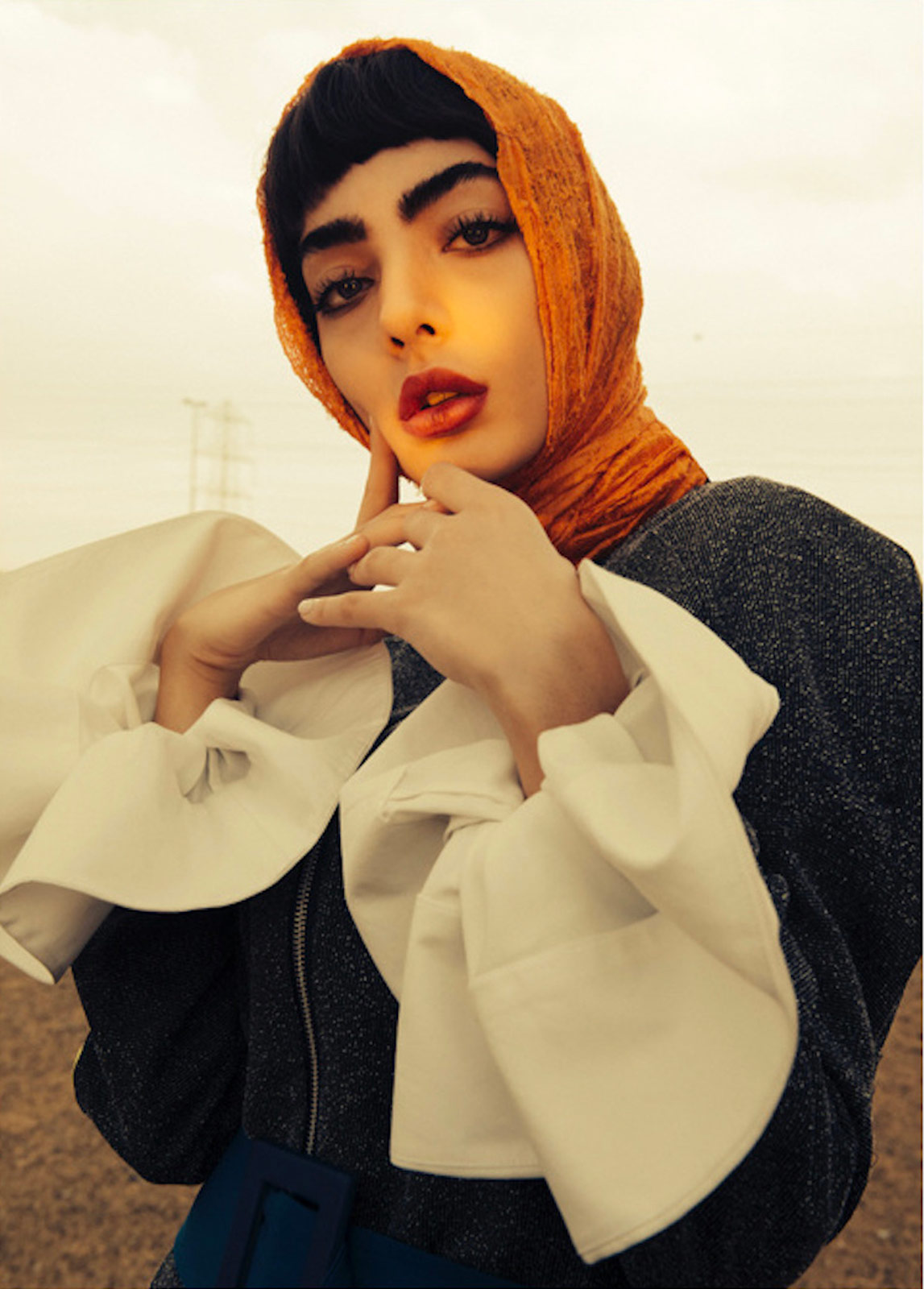