The Argentina-born, Paris-based film director Gaspar Noé presents his new feature film, Climax. In the timespan of a night, the movie shows a troupe of young dancers and follows them through a journey to insanity: after drinking sangria spiked with LSD, they turn into some sort of collective delirium, paranoia and hysteria. As usual, Gaspar’s work has received a great deal of attention but also polarized opinions.

Just like the storylines of Irreversible, Enter the Void, and Love, Climax explores human behaviour and altered states. It is an ode to sentimental reactions, conflicts and violence boosted by the aftermath of alcohol and LSD consumption. To top it off, this sexy bad trip is enhanced by the film’s soundtrack, which includes previously unreleased work by Daft Punk’s Thomas Bangalter – a usual collaborator and friend of Gaspar –, and some other classic tunes by Aphex Twin, Giorgio Moroder, Gary Numan, and the Rolling Stones, among others.

The movie was shot in two weeks, in one single location, chronologically, with many long takes, and with improvised dialogues. Noé has shaped a unique style, both in the storytelling and visually engaging. Therefore, artists of the likes of Nick Cave and Sky Ferreira have asked him to work for them – he did the Night Time, My Time cover shot. We sat together during the Stockholm International Film Festival to dig into this sort of orgasm synaesthesia, cinematically speaking.
We wait in the hotel room. Gaspar asks me if I smoke, I tell him to take his time. A team from some Swedish TV channel, who’ve just finished interviewing him, are wrapping up their gear whilst Gaspar is on the phone speaking to some cinema memorabilia store in Paris where he plans to stop by tomorrow. 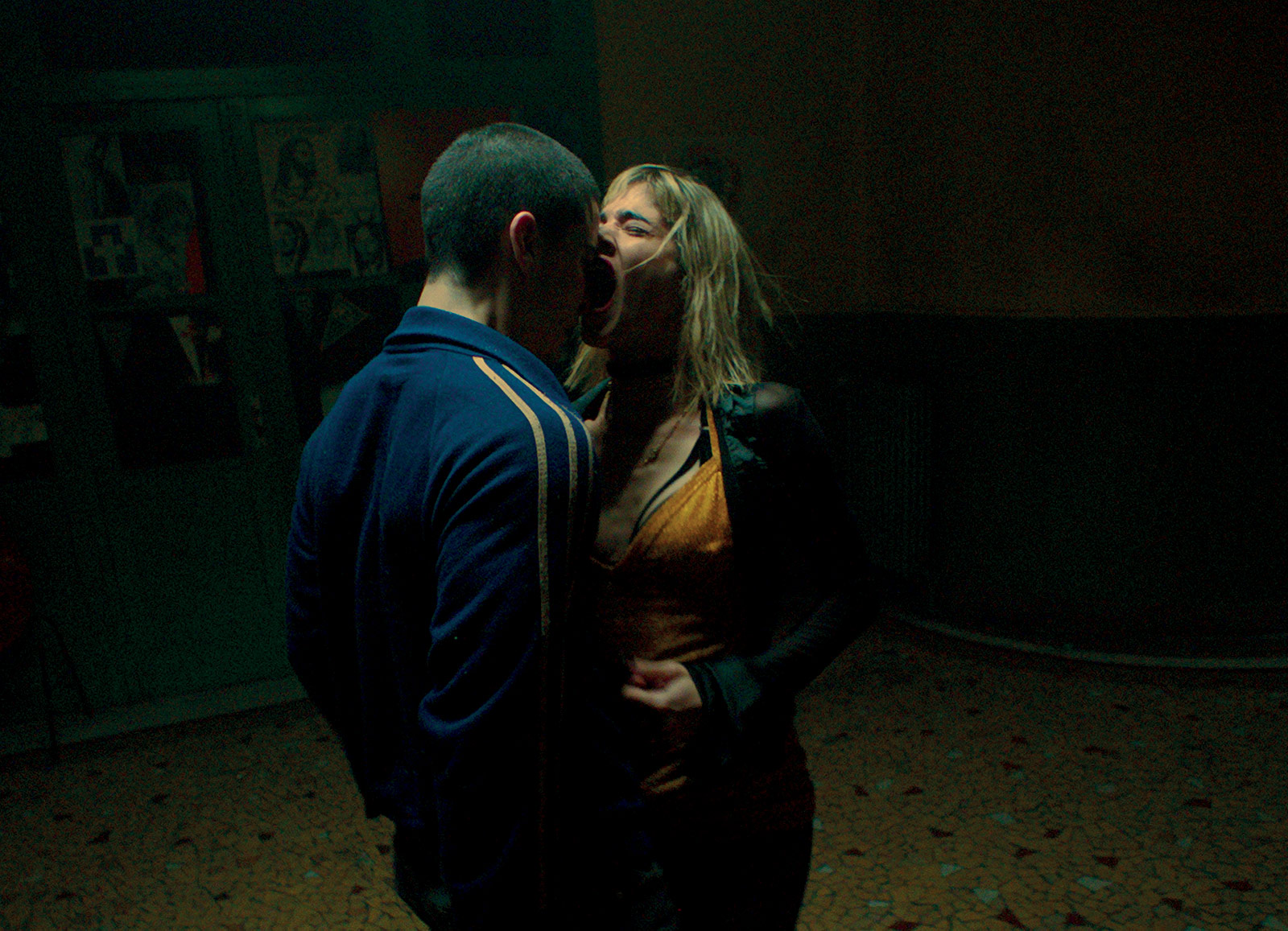 In your movies, there are always very special opening credits both visually and literarily – I love the quote “You despised I Stand Alone, you hated Irréversible, you loathed Enter the Void, you cursed Love, now try Climax”.
In the case of my new movie, Climax, the final credits are at the beginning, and the opening credits are in the middle because it is made of many extremely long pieces – it all takes place in one night. I recorded people dancing for forty-five minutes, then the movie stops, and then it restarts like one hour later, so it was better to cut it and add the credits in the middle.
How have people reacted to that so far?
I’ve received some bad reviews/comments. People are surprised that there are no opening credits, but then… boom! In the middle is when you get them. Actually, I don’t like those never-ending final credits. Movies until the mid-1960s would end with ‘The End’ or ‘Fin’, but since then, they started to add the names of every single person related to the movie, like who brought a few pens to the shooting.
(Laughs) I hear you.
Final credits are the most annoying part of movies since then. All producers go crazy like, “add this logo”, and then “ah, we have another ten more logos…”
Who’s in charge of that visual or graphic part?
He’s the same person who did the credits for Enter the Void – it’s very graphical as well. I came up with the concept, but who created all the logos and typography is Tom Cam. He directs commercials, he did a lot of record covers, and is always inventing typographies; he’s a workaholic. If I ask him to do a logo for an actor, he comes back with fifteen different options, all of them made with self-created fonts. He always says that you shouldn’t use other people’s typographies. Both his parents are Japanese, but he was born and raised in Paris.
I read Climax was shot in a couple of weeks, basically.
It was shot in fifteen days, in one single location, and in chronological order. When you’re doing a shooting schedule for a movie, you move from one location to another, and shoot one part here and another part there (and the latter goes before the former, probably). It’s very hard for actors to concentrate on the evolution of their characters. When you have the whole story in one location, it becomes a paradise for the direction because you can even rewrite the story. 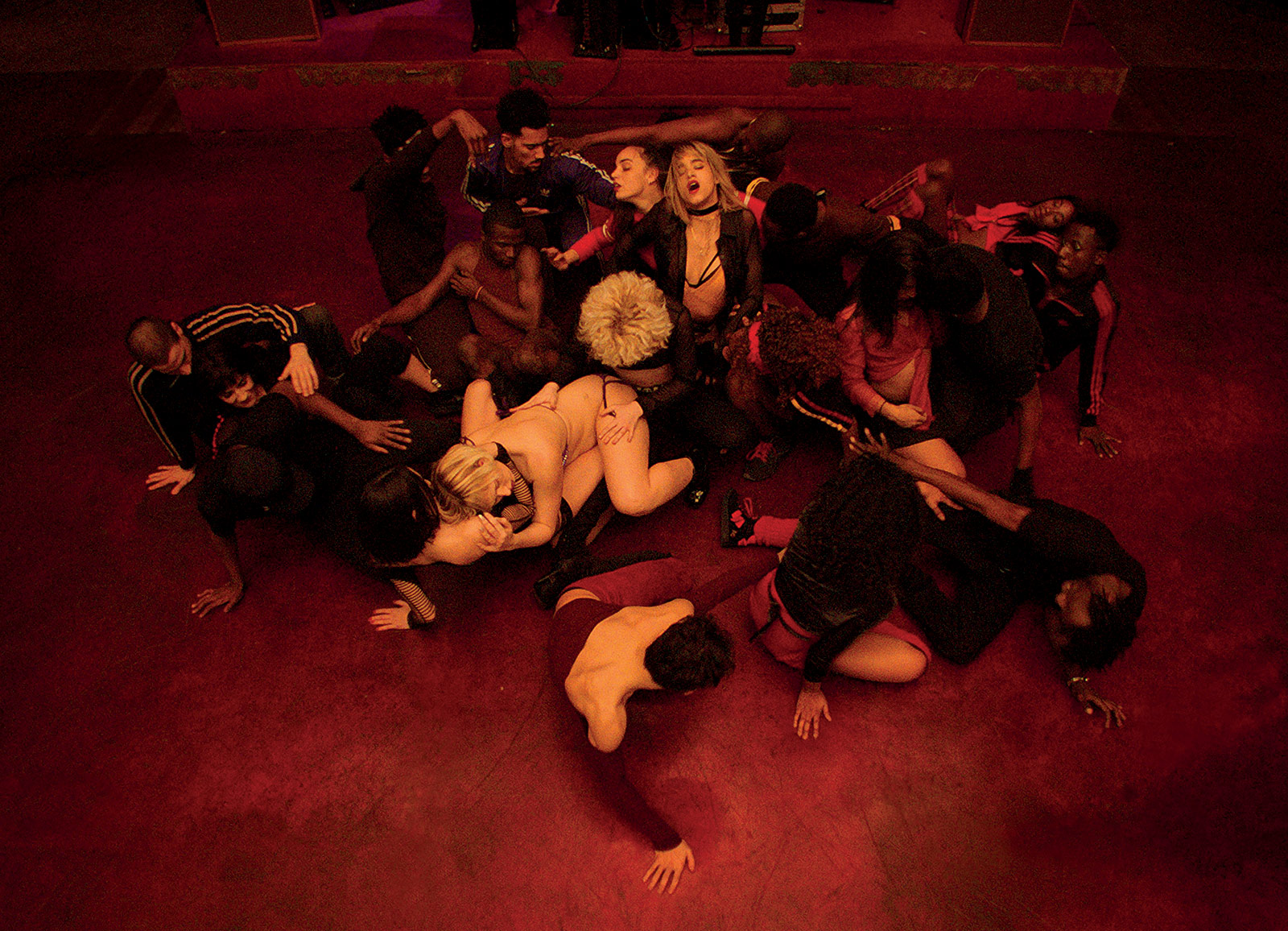 They relate to your characters.
Exactly, they connect with who kind of discover the choice of drinking too much, partying too much, or falling in love for the first time.
I presume every new movie is an opportunity to make new things. Apart from that freedom we’ve talked about, what else did you want to explore with Climax?
I never really filmed people dancing before – only in a music video I made, called Love in Motion, where there was a young girl dancing for four minutes, improvising. I really like it when people dance freely. Some people are telling me that my movies were so dark before, and that this one is…
…cheerful?
Yeah, the first part is cheerful. But the characters are very fascinating.
I think most of the scenes in the film are long takes. Does that make the editing process easier or more complicated?
Usually, the best takes are the last two, so I don’t spend weeks editing. Generally, you first do some takes and analyse them with the actors and your cinematographer. Then, you have a discussion with them before you do the next take, and it gets better and better – unless people are too tired or falling on their knees. Then, you move to the next scene.
How do long takes affect the rhythm of the movie?
It all depends on the number of scenes and on what happens during the take. Sometimes, you have to slow down, and sometimes, you have to accelerate – you decide that on set. You cannot really decide that in post-production, while editing. Nowadays, people are not that impressed by one long take.

“Some people have told me that I am a ‘provocateur’, and that sounds like a stupid French word.”
Do you feel comfortable with this sort of reputation as a disrupting filmmaker?
I don’t think it’s true. I know the movies I watched as a kid and as a teenager were all forbidden for people under eighteen – they featured dirty talking and hardcore fighting. So I don’t think I’m inventing anything new or being more disrespectful than any other director I simply admire. Some people have told me that I am a ‘provocateur’, and that sounds like a stupid French word (laughs). Twenty years ago, people would say about a filmmaker like Rainer Werner Fassbinder that this director has a crude vision of humankind.
Let’s talk about the music in the film. What did Thomas Bangalter (one half of Daft Punk) do in Climax?
He actually released an old score he had never published before. It’s a work from 1995. When I was doing the soundtrack for the movie, I asked him if there was a chance to get Rollin' & Scratchin' from Daft Punk, and he managed to get the rights. But apart from that, he contributed with these two songs he wrote in the 1990s. He remixed them for this movie, and I used one for the credits in the middle. The OST of Climax has been released on vinyl in France and in some other countries. There’s Aphex Twin, Giorgio Moroder, and other twenty different artists.
Did it take a lot of work to get that OST together?
We had to sign an agreement before we started filming because the dancers had to dance to those songs. There is one track I wanted to have but didn’t exist. I wanted to use an instrumental version of Angie at the end of the movie. We contacted the Rolling Stones but they were not answering regarding the conditions. One week before we started filming, we finally had a proposal to do a cover, so we recorded it for an amount of money. But they were very friendly, so the movie ends with that cover.
Speaking of remarkable collaborations with musicians: how did the video for Nick Cave come about?
I met him a few times before. I admire him, and he likes my movies. We had met many times in concerts and festivals, so one time he asked, “do you have an idea for this track?” And I had this strange idea… 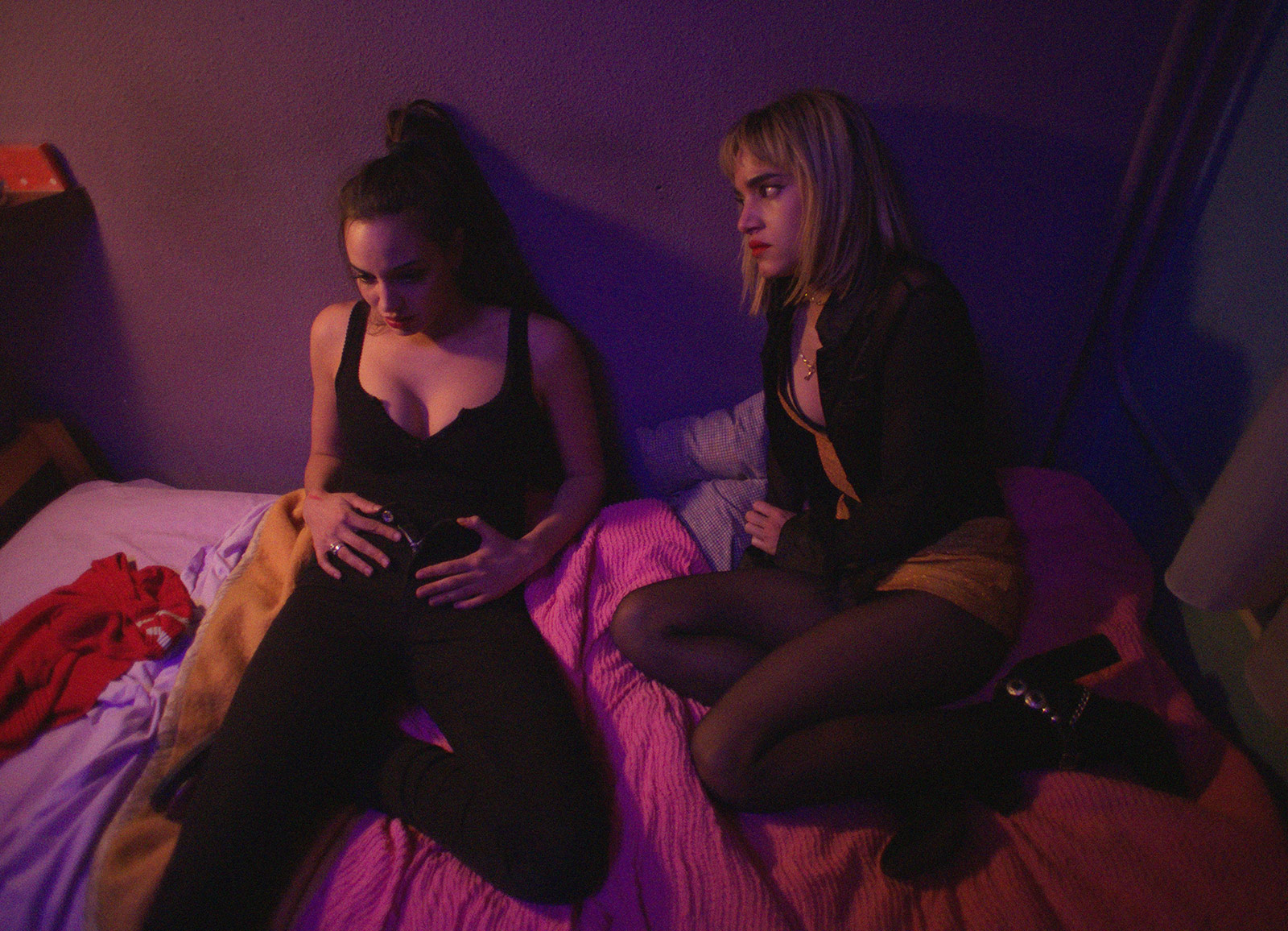 Is it in the forest?
Yes, it’s in the forest. He said, “you really listen to the lyrics”. That video is one I really like. If you like the music, you are more attracted to the video.
How important is drug consumption in your characters and the stories you like to tell?
When you make movies about party kids in their twenties, of course, it’s out there. But if I were to make a movie on another subject tomorrow, there would probably be no drugs involved at all. It all depends on the subject. In the case of Climax, it’s more about alcohol than drugs. The worst fights I’ve seen in my life weren’t with people high on drugs; when people get drunk, they can become very aggressive and not even remember what they did.
Have you encountered any censorship issues with this new movie?
For example, Irreversible was screened in many countries like Turkey or Russia, where it was very successful. But sometimes, when you show nudity or two girls kissing, some countries consider it offensive. For Instance, Love did not make it to Russia or Turkey, but Climax will be shown there. Whatever they consider sexual is considered graphic violence. When you show an erect penis or pubic hair, many countries freak out. It is very weird. I understand Irreversible can be more shocking than Love, but Climax has not encountered distribution problems at all – besides in Muslim countries, probably.
Do you see yourself making movies with less controversy or that’s nothing interesting for you?
I don’t care enough if people dislike my movies. It’s more annoying when people just tell you, “I like you” (laughs). 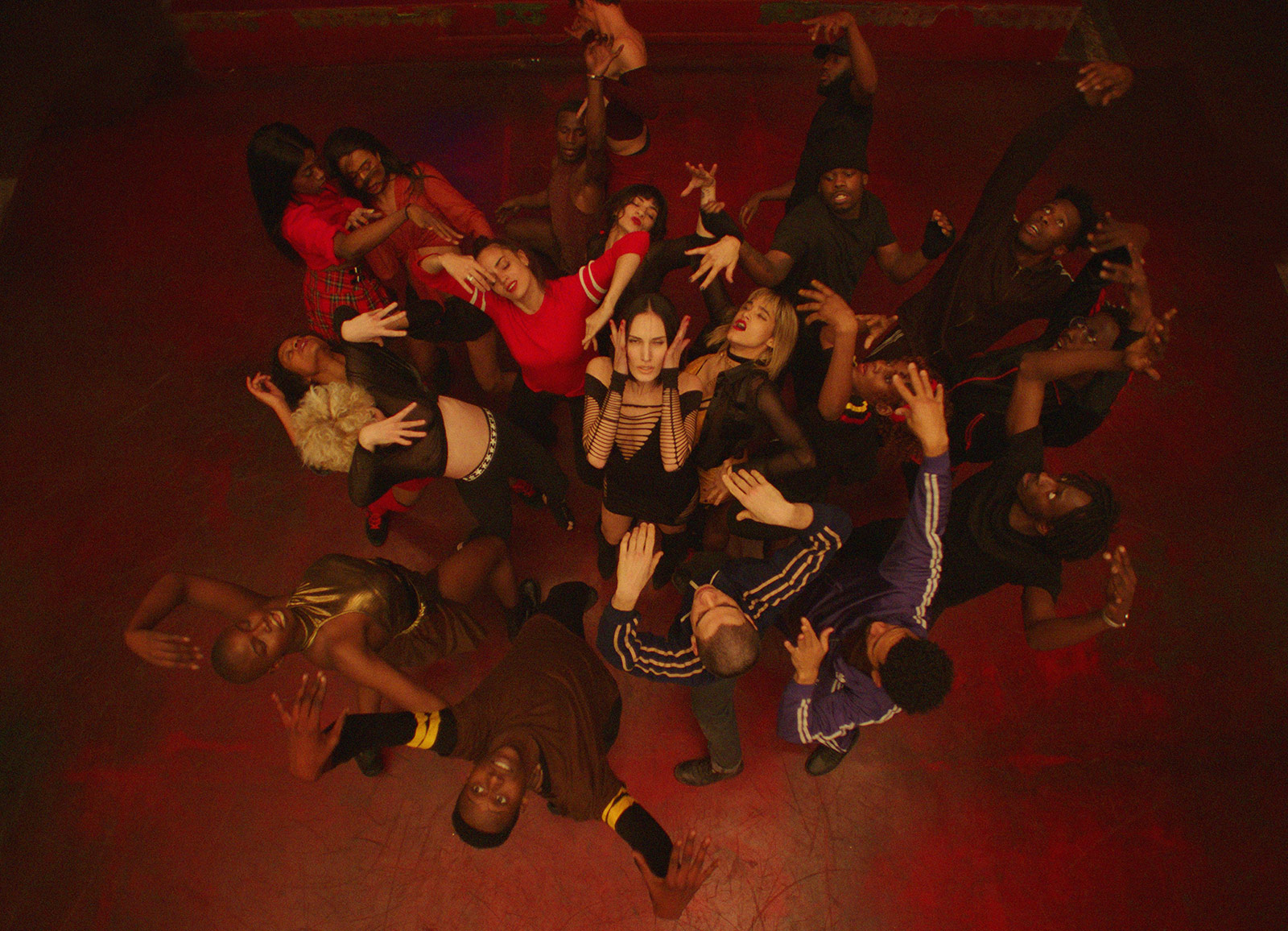