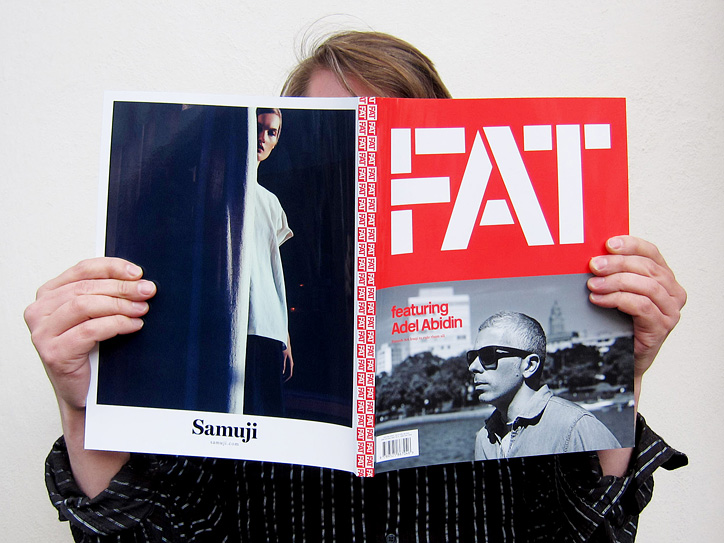 The dazzling team behind FAT consists of Pekka Toivonen (Art Director), Jonathan Mander (Text Designer) and Tero Kartastenpää (Moderator), all of whom are former members of Kasino A4, which was arguably the most inspirational and stylish Finnish magazine in the last decade. This time they’ve teamed up with curator Laura Köönikkä to create a unique blend of Finnish art and lifestyle in the space of 235 x 295 mm. FAT  is an annual magazine that came from the idea of treating Finnish artists seriously through a fresh approach and a genuine understanding of their work.

In order to amplify the possibilities they create an editorial concept for each artist, dividing the selected works into the magazine’s three "gallery rooms". The rooms take shape on a different paper to create the juicy, soulful tangibility that is FAT. We went for a coffee together at a café in the heart of Kalio, in central Helsinki.

How did you bring everything together in order to create FAT?

Jonathan: This project started when we teamed up with the curator of this project. Laura was working at an organization called Frame, which is basically dedicated to export Finnish artists abroad. So, they needed a magazine for Frame and we decided to make it, so basically Laura was our client by then. We had a great thing going on there and we thought to continue on our own.
Tero: Frame had some restrictions and we wanted to do it in our way, totally.
Jonathan: We did a magazine about Finnish art that was in accordance with our vision. We want to talk about the artist and, in a way, we want to talk.

How long did you work together with Frame?

Both: For a year.
Jonathan: We had this vision about what to talk about and what not to talk about. There's often this scruffy view of the artists with bad photographs. So we thought, why not feed an artist like any other cultural operators, tell the stories, there are many characters and views, so we wanted to share all that. Put an emphasis in life and find the energy.
Tero: It is totally like up art talk, art history and the arts researches. Trying to make it easier or exciting.
Jonathan: I like it when you go to a gallery and you are not there for the little text on the wall. I think most art magazines are about that little text on the wall. If you are feeling something you want a kick out of it, and we wanted to share that same feeling with this magazine, give you that similar kick to the one the art gives you in the exhibition.

Tell me a bit about how you’ve structured the content of the magazine.

Jonathan: It is divided in three different gallery rooms, each room has its own paper. Instead of interview after interview, we give every artist his or her own treatment. We think about the artist, what kind of art they do and how we gonna build the story. For instance, you can find an interview with All Pilvi Takala because that suits her art.
Tero: She makes a lot of money with her art, getting pretty rich. So we went to Berlin and gave her 120 Euros. She had 120 minutes to use the money, see what she wanted to do. So we had the feeling of money here, but there was a catch so she had to entertain our readers in a way.
Jonathan: We do the same with every artist, we think about a concept that suits that kind of artist and the way we want to trade them and then we go ahead.

Is it only the first issue that is about Finnish artists, or is this a long-term concept?

Jonathan: Yeah it is. I think the Finnish art is kind of neediness. We also got a government grant, which helped us to keep this focus, I guess. But I think it is good to focus somewhere, instead of trying to cover all the art in the world. We choose these artists.
Tero: It's a very clear point of view, something really new for most our readers.
Jonathan: In a way, nationality doesn’t matter in art. When you go to an exhibition you are not necessarily thinking where the artist is coming from.
Tero: I think we can do something for these artists too, we want to treat them as seriously as they should be treated. If you are a FAT reader and you don’t know these guys are from Finland, it doesn’t really matter.
Jonathan: We want to produce a magazine that touches people wherever they are from, so we have to do it really well so people feel the need of getting it and reading it. This is one of the reasons we do the stories like we do. We try to find something that's universal.
Tero: Content and packaging. You want to be fat, feel the weight of it. We don’t restrict ourselves.
Jonathan: Exactly. We are free as hell because we can do whatever, and treat the artists however, always respecting them of course because we care about them. In the case we wanted to do something about other non-Finnish artists, then we would just find the way of doing it. You could say the magazine is like our annual of Finnish art.

I presume that one year is enough time to select the right artists?

Jonathan: We pick the best. We think about what’s coming up, who'll be making good stuff in the coming year and we make our choices. There are many good artists around.
Tero: It’s like a group exhibition. These are the artists we have picked for our first one, then twenty more for the next one.
Jonathan: Yes, it's like curating an exhibition. We get a good mix of different sort of artists.

How do decide which artists to include in each issue?

Tero: Most of the artists we’ve chosen are not beginners really. They have bigger careers, so we can see if they’re promising enough.

Do you include up-and-coming artists?

Jonathan: There are up-and-coming but in the international stage.
Tero: They are not like fresh from school. We have old geezers too.
Jonathan: When it is about the old geezers it is nice to take them for a sauna in the middle of a roundabout (laughs whilst he shows me the actual article).
Tero: That is actually one of his art pieces… (More laughs)

In 2012 Helsinki was named the World Design Capital. Do you think that was an inflexion point?

Jonathan: Well, there was more interaction whether in fashion or events at bars to take a peep. For us, we’ve always been pretty open-minded about stuff, we always tried to interact with others, fashion and art or whatever, not that narrow minded. We want to push it between the ribs a bit. Like, hey open your eyes too, everything is possible.

You held the magazine’s launch party at the Design Museum in Helsinki.

Jonathan: Yeah, it was an exhibition as well. We had a few people, vodka,some Swedish “snus” (laughs), see we even brought Sweden into the mix! The Cultural Minister was there and Absolut did lots of cocktails.
Tero: We are now planning the launch event for the second issue which is going to be in Germany.

Do you have a network of contributors?

Jonathan: We have a good network of contributors. I guess all the photographers are kind of artists in a way, they probably also have their own exhibitions.

Could you say that there’s some sort of link between Kasino A4 and FAT?

Jonathan: I definitely see some kind if a link. We are following similar aesthetics. Probably, our bigger influence is ourselves (laughs). Don't repeat but take it to the next step. The point of view is very different though. The concept before was that we were a melancholic magazine, so we could do anything. So we have that vision of how to make a magazine engaging and fun. A magazine has to look like it's been fun to make, otherwise it's quite possibly a boring magazine. Pekka and I have worked together for 10 years and Tero half of that. It is intense but it is easy, the wavelength has been set. (laughs).

How do you choose which work to include from each artist?

Tero: We receive lot of work and if it's not enough we ask for more. There are 250 images in this issue, we maybe had a thousand to choose from the artwork.

Pekka Toivonen represented FAT in Munich at the Abc&D. Can you tell me about this?

Jonathan: It is an editorial design festival, with the top guys giving talks about it. So Pekka is there presenting some case study about us. If we compare with the regular magazines, I think we are not that protective of our own profession. I guess the traditional way is that the writer writes and the AD does the art. We believe the magazine is a visual medium so we try and think of it has a whole, not just toss texts and pictures. So together we've defined a script, not only the idea but also what is going to happen, go into it in depth. Of course randomness happens as well, but we have a kind of framework. We have a very defined concept but who knows what's going to happen from it. We might attend Facing Pages, the independent magazine biennale in the Netherlands.

In some of the feature articles you added visual effects to the actual work of the artists.

Jonathan: We do something very physical, like playing with the stroke of a painter or the analysis of the stroke.

Paper has become a bit of a luxury these days in which online publications and tablets are gaining popularity. Would it destroy the concept of FAT to explore digital formats?

Jonathan: Maybe at some point it could happen that we do something digitally, but for now it is a physical experience, you can feel this flow. Digital has too much noise; if you get heavy digitally, people get tired of waiting (laughs). It's got to do with the art too; normally art is best experienced live, tangible. Of course the art is better in the gallery than in the magazine, but at least here the reality is still somehow closer. We are not traditionalist, but the magazine right now is a good way to get this bold statement out that we think FAT is.
Tero: There is a motto: “ha-ha” – just do and smile. 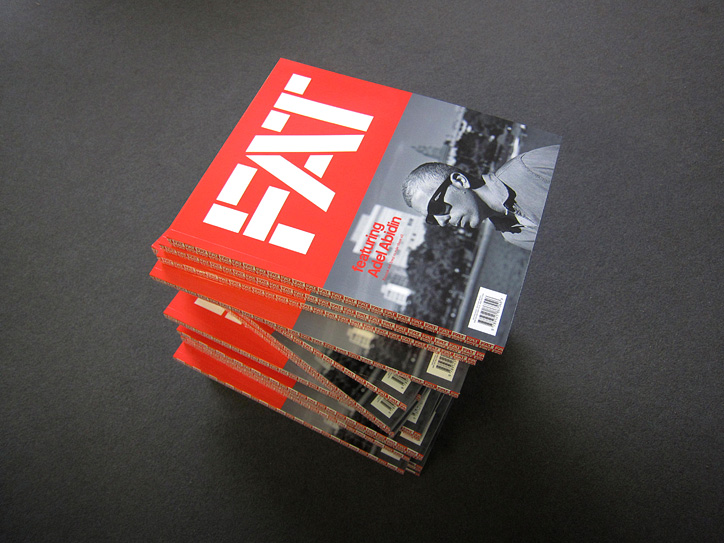 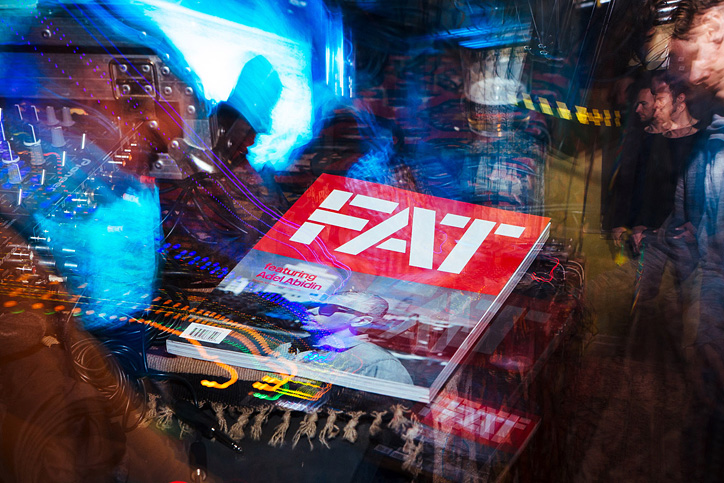 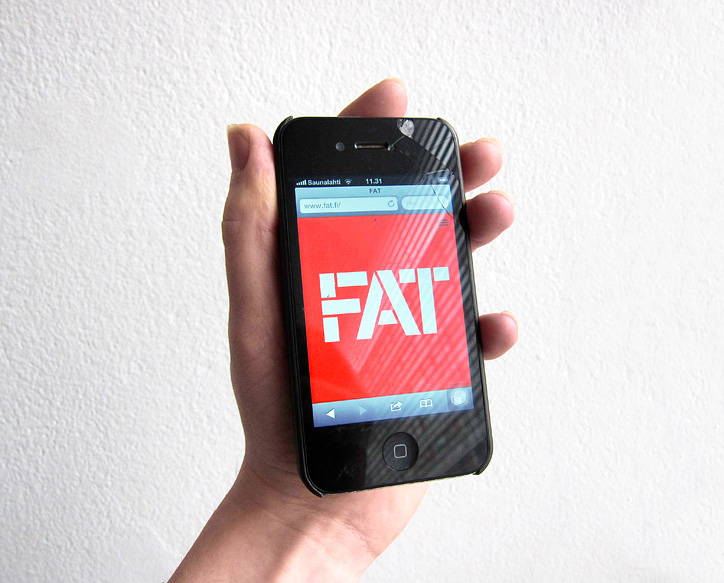 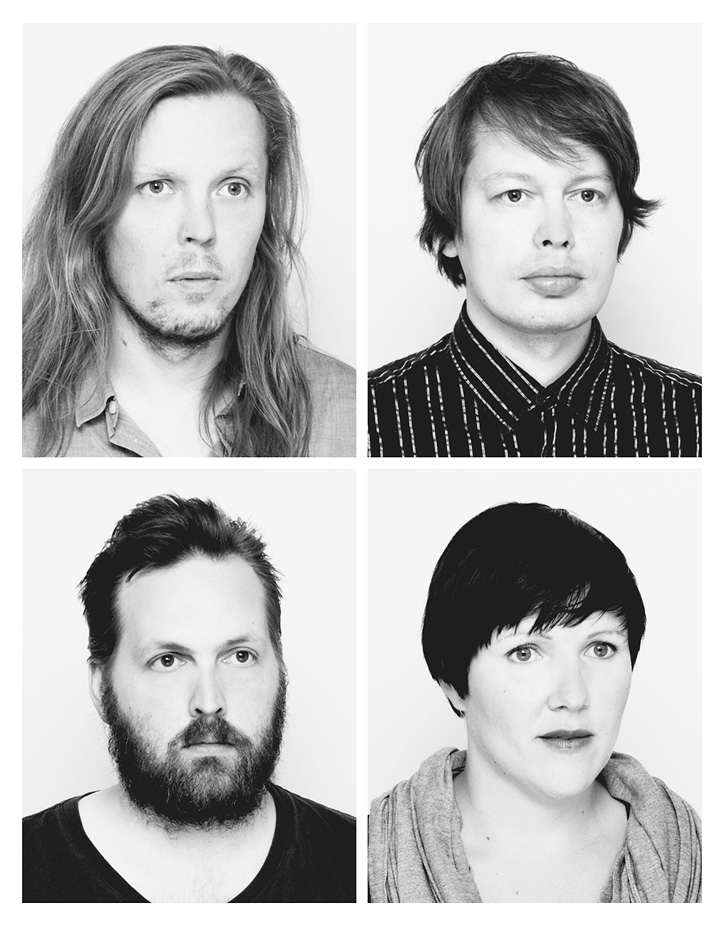