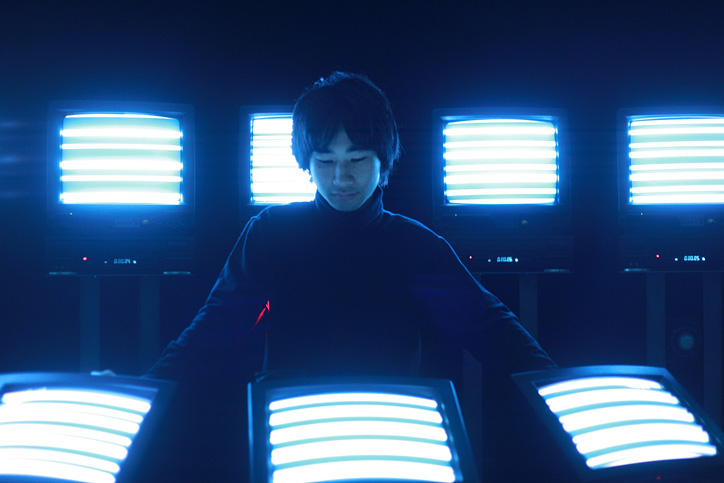 In the era of new technology almost all devices have become obsolete. Ei Wada is a musician and artist based in Tokyo who has defied this inevitability by giving a second chance to those objects with a short life span. Using his creative mind, he has transformed some old electrical objects into new musical instruments. Tomorrow he’ll be in “A taste of Sónar+D” by Mazda Rebels playing his extraordinary creation “Braun Tube Jazz Band”, a kind of percussion instrument built from old TVs and that looks like an astonishing pictorial sculpture.

How did you become interested in visual devices and advanced sounds?

Braun Tube Jazz Band started when I accidentally connected an audio output cable and the video input of a Braun Tube TV. A noise pattern came up on the screen, and I thought to myself: “If this film came up because I inserted a sound signal, then I can probably change that back into sound”. I started to experiment and soon I understood that a TV is a musical instrument connecting hearing and sight, and that a sound can be born from a visual signal through an electronic mechanism. I had the idea of some unknown lands where discarded TVs join together to play in a big concert. After realising that I can express visual and sound as one unit, I found that producing music was a way of expression. This included thinking about how to play the music and which instrument I should play the music with. And producing music also calls to mind a landscape or a story, and then a musical experience derives from there. These things interest me very much.

Your creations are not categorized by a common discipline. Where does your inspiration come from? Are there any artists that inspire you?

I have a strong memory of the music I experienced when my parents took me to Indonesia as a child. Seeing these mysterious people playing together with a strange intensity and with indescribable instruments made a big impression on me. This scenery, including the smell of the air, is strongly imprinted in me. I remember when my father showed me how to use a LP recorder for the first time. The needle is dropped, the pitch-black disc starts to spin, the code called groove is detected and creates music. It was like magic to me, very mysterious. (I think that record was Velvet Underground). I've been influenced by a lot of people. Thinking of records, Christian Marclay had a big influence on me, and when it comes to TVs I admire Nam June Paik.

You’ll be presenting your musical experiment Braun Tube Jazz Brand in A Taste of Sónar+D by Mazda Rebels. What does it mean to you to be part of this festival?

I think this festival is the place where I can positively go experimental, and even further, with my intellectual curiosity. I feel honored to be able to present my theme and perform here. I hope to get inspiration for new ideas and concepts.

Braun Tube Jazz Brand was born when you came up with your revelation: that many electrical appliances abandoned in the streets can be played like instruments. Was this born from some personal inquisitiveness?

There is a musical instrument called Taishôgoto in Japan, which is a hybrid of a typewriter (a product from the West) and a Koto (a traditional string instrument). I heard that when this was imported to India it was paired with Indian music to create the 'Indian Banjo'. And there was the story of the stroh violin, which is a combination of a violin and the phonograph, an English invention. It was introduced to Myanmar, which was an English colony at the time. Some golden ornament was added and it became a folk instrument. I'm very excited by the idea that this could happen to disused electric household appliances and devices as well.

So, through Braun Tube Jazz Band does it feel like you’re giving a kind of second life to these out-dated technologies?

I guess one of my focuses is to create a new dialogue with exhausted and deteriorated technology.

It’s very curious how you have transformed some technological means of the 20th century into new percussion instruments. Could you explain how it all works?

On a TV, a wide range of diverse patterns appears. These are emitted by a computer (or VCR or media player). The electromagnetic waves coming from the TV monitor change with the patterns on the screen. Using my naked hand, I absorb the electromagnetic waves and lead them through a cable that is connected to my feet and into a guitar amplifier, which then emits the sound. Deep sounds appear in the form of a few thick stripes on the screen, while high sounds appear as numerous thin lines.

Braun Tube Jazz Band is not only about the music. Its appearance, like a pictorial sculpture, is fascinating as well as its personal background. What is the idea behind the whole creation?

It may be an attempt to turn images and forms into sound (music). Intuitively, I feel that what connects them both, frequency and waveforms, has something to do with the mechanisms of the universe.

How do you feel when you’re on stage playing an instrument that you’ve created for an audience that likes what you’re doing?

It makes me genuinely happy. The name Braun Tube Jazz Band is just the first thing that came to my mind, even though it is neither ‘Jazz’ nor a ‘Band’ and I perform alone. But doing it, I always feel that I want to perform together with everyone in the audience. I would like to do that one day.

You have been working on Braun Tube Jazz Band since 2010. Do you have any new ideas in the works?

I'm working on some new works now that I will present this and the coming year. Since last year I've been presenting installation works and this year I will show some new works in Japan and abroad. From my base in Tokyo I'm collecting disused electrical devices and turning them into musical instruments, doing workshops and making plans to build a giant radio tower around which to hold a huge concert. One day I want to present that project all around the world. I'm looking forward to it.