Art made me a happier person 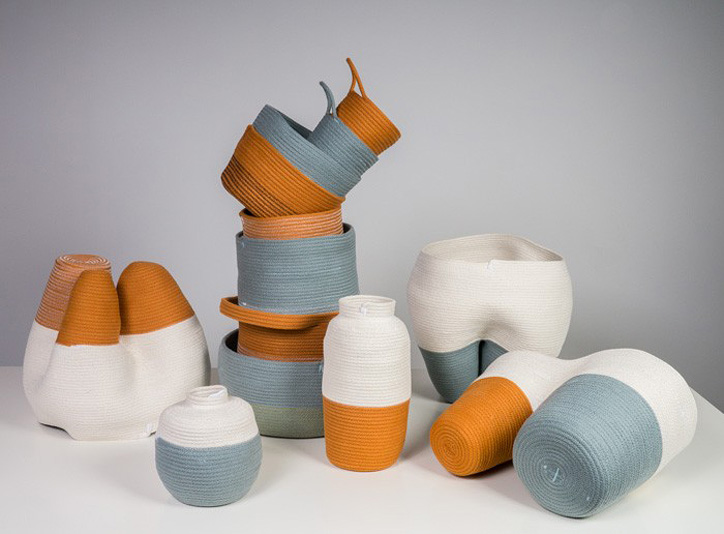 Doug Johnston is a multi-artist. His work includes art, design, architecture and music, utilizing and exploring a variety of mediums and methods such as installation, fiber art, sculpture, photography, and collaborative performance. Being involved with all these forms of art and creativity, Doug claims he became, if not a better, then a happier person.

The Tulsa raised artist says that if he could, then he would make his entire world all by his own, with his handmade creations. It is not a stretch to say that there is a ring of truth in that, since his creations vary from furniture to clothing and baskets from natural cotton rope. All these, while he has his loving wife, Tomoe Matsuoka, by his side with whom he currently works in their Brooklyn studio.

Do you believe you were born to be an artist or you realized it at some point in your life?

I don't think I was really born to be an artist but I did get excited about the possibilities of art and space-making at a very early age. Sometime around the age of four I realized I wanted to be an architect after my mom explained what they did. Also when I was a kid I had visions of these wood shapes and constructions that I wanted to make with such a strong urge, it was something I had never felt. That kind of intense desire to create has never left and become an artist has been the best, most satisfying way to focus and utilize it I suppose.

Nests, full body knitted stuff versus everyday life products and useful decorations. Your creations differ so much among one another. Talk to us about this big range of inspiration.

The ideas I get and the things I make all stem from that creative urge I suppose, so for me they are all kind of the same thing. I’m speaking very generally of course, but in the studio I love that I can make anything and not worry about what it is or what it does in the world. It’s when the things leave the studio and enter the market and other systems that they have to find their place, their use, and are subjected to various taxonomies. I have a little bit of lamentation for that process, but sometimes it comes with positive results. Making art objects, utilitarian or not, is a joyous thing for me and I love to explore a wide range of things. I would love to create my entire world if I could!

Pale colors characterize your work. Did your hometown’s landscapes affect the colors you use in your art? If not, then what?

My work tends to involve natural materials often left in their raw state so the pale colors are more of a consequence of that rather than a conscious choice. I like using brightly colored threads with the stitched rope works, but the thread is so thin it appears pale against the natural cotton. Certain aspects of Tulsa’s character or history, such as the wealth of wonderful mid-century modernist architecture that exists there, combined with abundance of greenery and easy access to the countryside definitely affected my work in a few ways.

Projects such as “Nests” and “Tube” seem like they express a need for privacy and isolation, maybe safety too. Is that the way you feel? Do you need to be let alone at times inside a nice woolen cocoon? Why is that and what would you do inside your nest?

The Nests were actually a very social endeavor. The idea was that people could work together using a very simple technique to create a space that was both a small place to socialize and a production of social activity. The shell is very open rather than private, but all space making in essence has at least some isolating or separating action I suppose. The Tube on the other hand, while the material manipulation was very related, the overall idea was very personal and private. It was knitted alone in my apartment and was meant to act as a very small space for me to find comfort. Part of that was a reaction to my new home of New York City and the need for personal, private, comfortable space in a dense city, and part of it was about taking a piece of yarn and transforming it into a flexible, spatial and body-scale object. Likewise, the Rumpleskillskid project had very similar origins to the Tube, but was more influenced by nomadic architecture. I tend to think very much in terms of architecture and scale – how can I create something that I can occupy or engage with my body? A space to go in, an object to sit on, etc. So much of my work has to do with creating spaces that can be experienced very simply with one’s body and they come about through these simple repetitive actions. I try to make those actions legible in the finished work so that there is a understanding or connection back to using one’s body for making things – making the world that surrounds us.

You are involved with music too. Could you name a few influences?

There are so many musicians that have majorly influenced me during my life, it would be a very long list! People like Charlie Haden, Ornette Coleman, Charles Mingus, Zach Hill, Brian Chippendale and friends like Daniel Sutliff and Brett Treese will forever amaze me. Many bands from a wide range or genres have had a big impact on my sense of aesthetics and understanding of music.

Do you believe music completes your other works?

I don’t think it necessarily completes my other works, but I think it can help myself and others towards a deeper understanding of how my brain works.

Could you explain to us the purpose of the incredible Crotchrock?

Crotchrock was the result of thinking of music as having a physical presence – one that really affects us personally, socially, and intimately. Pop music, whether its rock ‘n roll or soul or hip hop seems to get more and more straightforwardly sexual as times goes on and the emotional game of courtship with music and “mixtapes” or (playlists now I suppose) has been changing along with it. The piece played with those ideas by seating two people facing each other for an intimate, musical exchange. Each person could connect their ipod or phone or music player and blast music direct to the other person’s crotch via a 15-inch subwoofer that was mounted between their legs. It has the formal language of gym or exercise equipment because people are used to putting their bodies into special positions in public with that kind of equipment. It is a kind of two-person chair with a very specific purpose of public courtship that is ridiculously direct.

Did you take something from all those music projects you where involved in that helped you in your life? What is that?

The main thing I took from playing music was the importance of improvisation. The skill of improvisation is one that I have tried to hone and get as comfortable as possible with everyday life. It means having a real ability to listen to and recognize multiple layers of things that are happening simultaneously and being able to respond to them instantaneously. Ideally, the response is appropriate for the context but if it isn’t you have to be able to improvise your way through the weirdness. With improvisation those unexpected moments or mistakes can produce the most exciting results – often more interesting or exciting than when something is planned. In my art and design work I try to leave as much room as I can for improvisation and spontaneous creation because I have so much fun working that way.

Did art make you a better person?

I don’t know if it has made me a better person, but I think experiencing art as a viewer and as a creator has helped me to better understand human culture, and to a certain degree the natural universe as a whole. It has also helped me to understand myself and explore many wonderful things that have brought me a great deal of joy. It has provided wonderful social connections as well. It has definitely helped me to be a happier person.

How does it feel to do things with your wife?

For example in the Haircuts project.  I love working with my wife, Tomoe Matsuoka, because she has a completely fascinating way of seeing and experiencing the world. While we have a lot of overlapping sensibilities, she brings unexpected and wonderful ideas to our collaborations.

Could you excuse our indiscretion and tell us how did you and your wife meet?

We were classmates in graduate school. We were both studying in the architecture department at the Cranbrook Academy of Art in 2007 and we fell in love.

How was the experience of your latest exhibition “Brooklyn Nets”? Did the crowd embrace it?

The pieces in the show were all new and explored various aspects of the stitched-rope process that I have been focused on since 2010. I had been exploring those ideas for a long time but hadn’t much shared any of those explorations publicly. The gallery was wonderful and it was great to see all of the pieces come together. The exhibition was in my hometown of Tulsa, Oklahoma, where I grew up but haven’t lived since 2005. I was very excited to be sharing my work, and especially those pieces, with the Tulsa audience, which included many of my family and friends. They are very supportive of my work so it was a very nice reception. The images I have shared online with a broader audience have also been well received and I am excited to continue doing work along those lines.

What is coming for you next?

The studio is definitely busy and starting to move in several directions at once. We are always working in new pieces for our wholesale/retail line that includes bags, baskets and small sculptural vessels and accounts for the majority of time and production in the studio. I will also be continuing to create new wall-hanging sculptures and art pieces for exhibitions and private commissions. There are also new furniture and lighting pieces and custom commissions that I’ll be working more often. Additionally, Tomoe and I are slowly working on a line of sculptural or concept-based furniture pieces that we hope to introduce sometime next year. 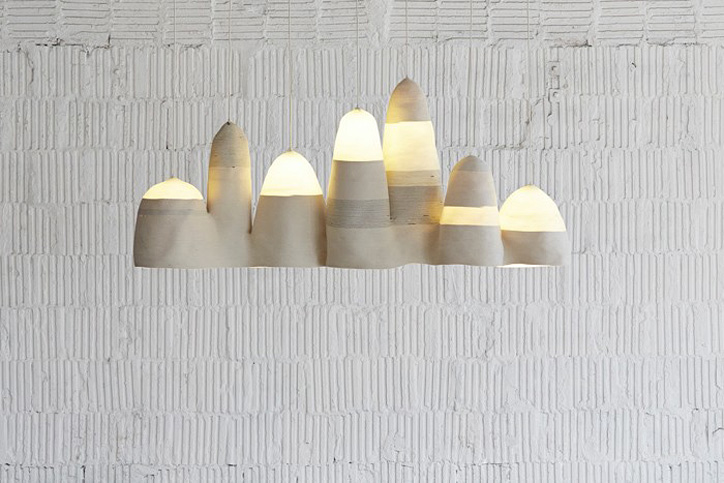 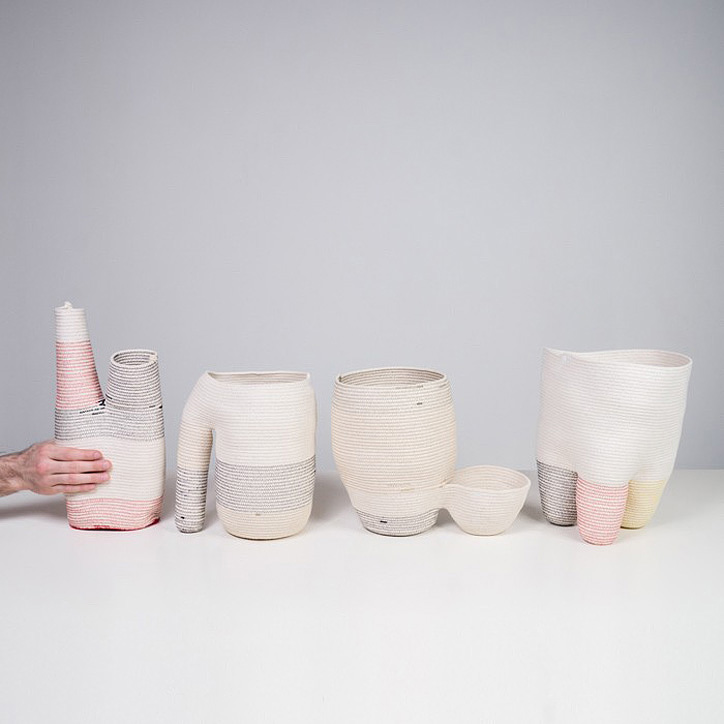 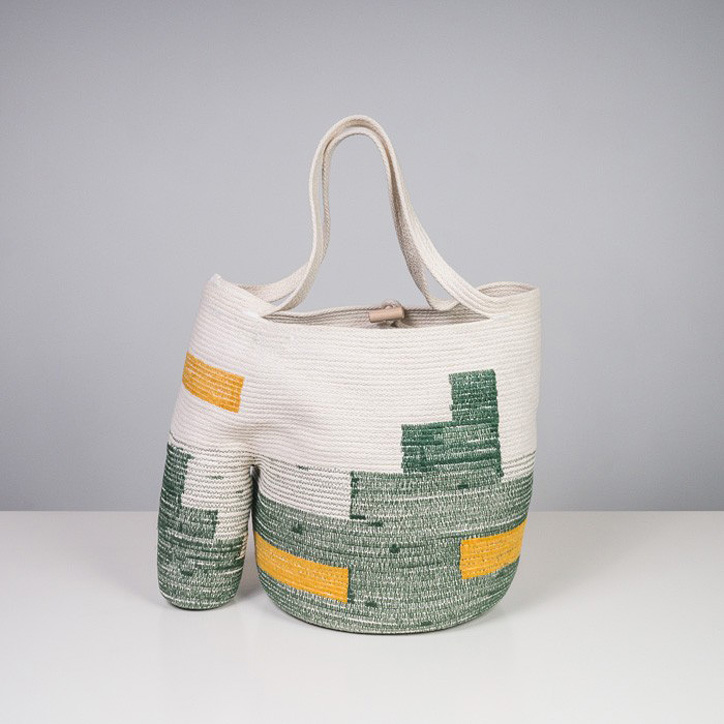 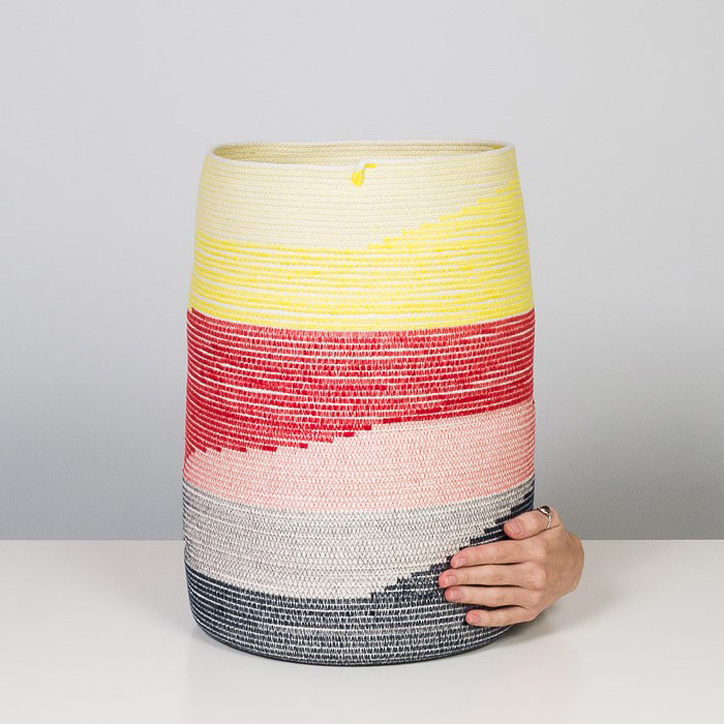 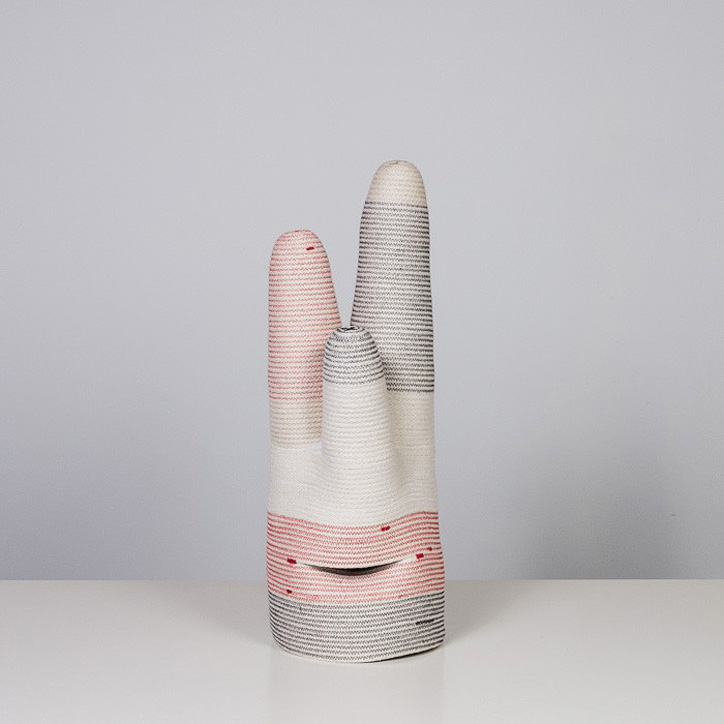 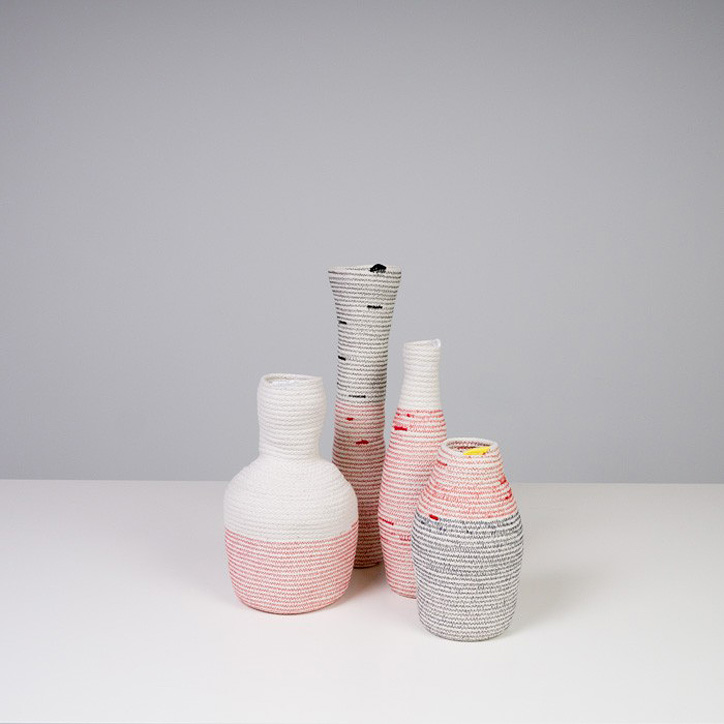 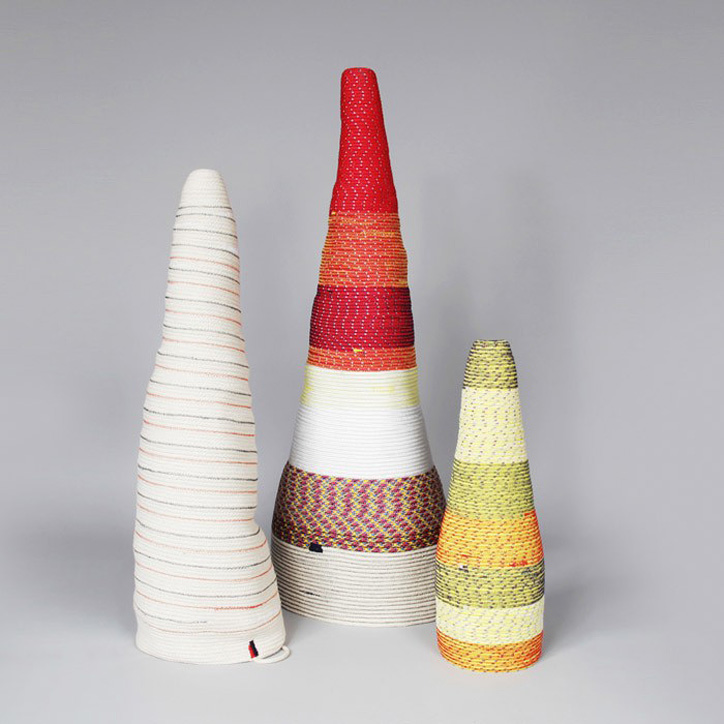