I have to tell you something 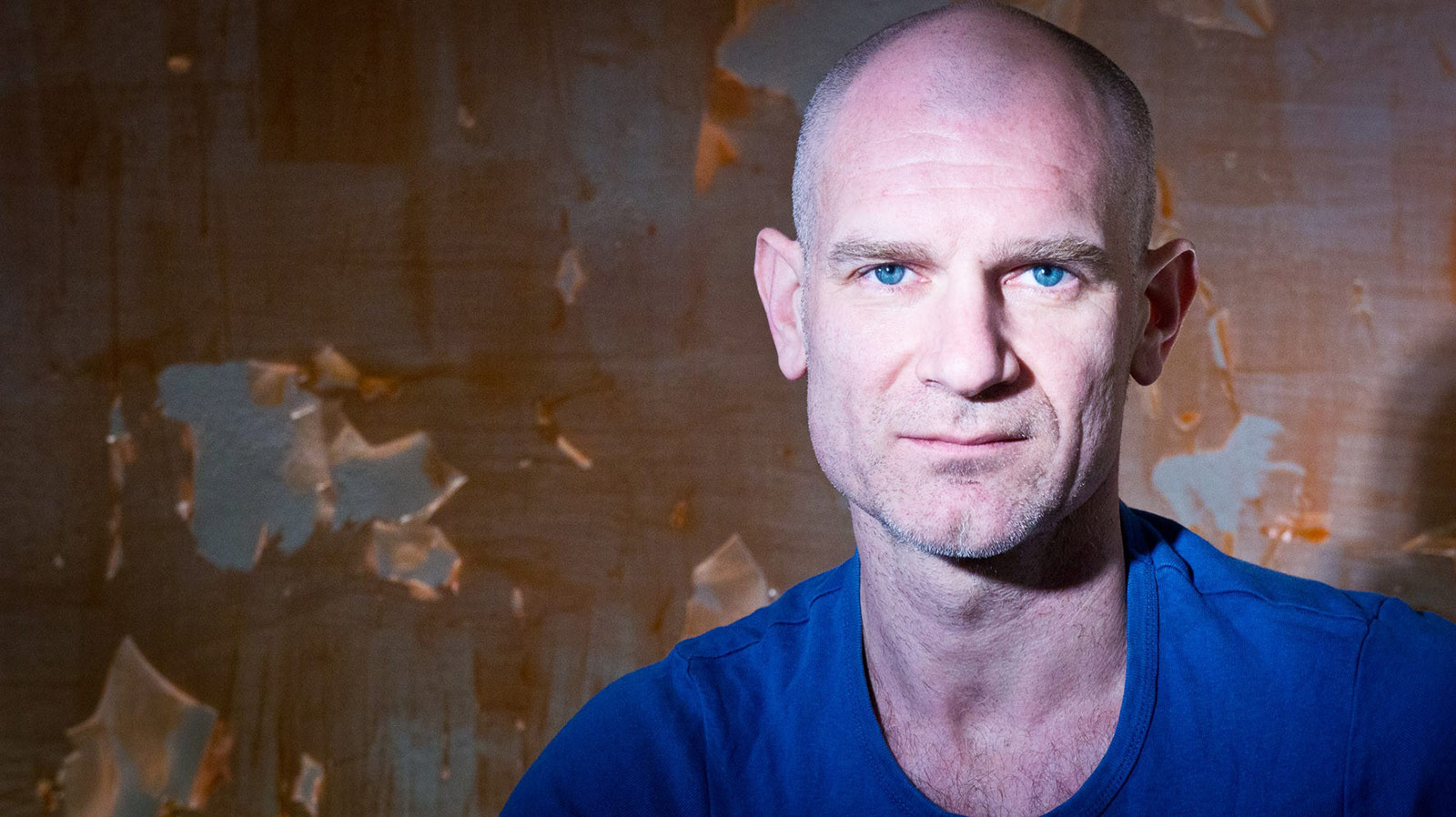 We crossed the labyrinthine backstages of Naves Matadero in Madrid, ship 11th, where we found Chris Haring sitting in silence, as a thoughtful spectator, in front of a huge screen and a utopian dinner table set that in a few hours would be on scene, once again, for a new show. But when we meet for the interview, there’s no audience. The room is empty, just him and a bunch of wires and some rests of the props we saw the night before when we attended the show Deep Dish in a completely different scene.
Chris Haring, founder of contemporary dance company Liquid Loft in 2005, was in Madrid last weekend to present Deep Dish (from the series The Perfect Garden) for the first time in Spain, and we had the chance to talk about his innovative projects and the multiple dimensions of reality which were projected on the show. Through a video camera handled by the characters, we were driven to a parallel world of organic objects – fruits and vegetables – whose rotting process simulated the decadence of nature.

Opulence and extravagance that seemed to fade at the same time the protagonists succumbed to the fugacity of the moment: they collapsed for a second and, suddenly, we were in another thing. A strong narrative and visual language which remind us that ephemeral beauty can arise even from the smallest details.

Chris confessed to us that during his stay in Madrid, he had some spare time to visit the Museo del Prado, where he was impressed by the painting The Garden of Early Delights, by Hieronymus Bosh, which is one of the inspiration themes that visual artist Michel Blazy adapted for Deep Dish, representing this metaphor about the risks of nature and its uncontrollable sensuality: “Variations and metamorphoses, forms and patterns come to act implicitly, just the way they are demanded of human nature”, explained Chris. 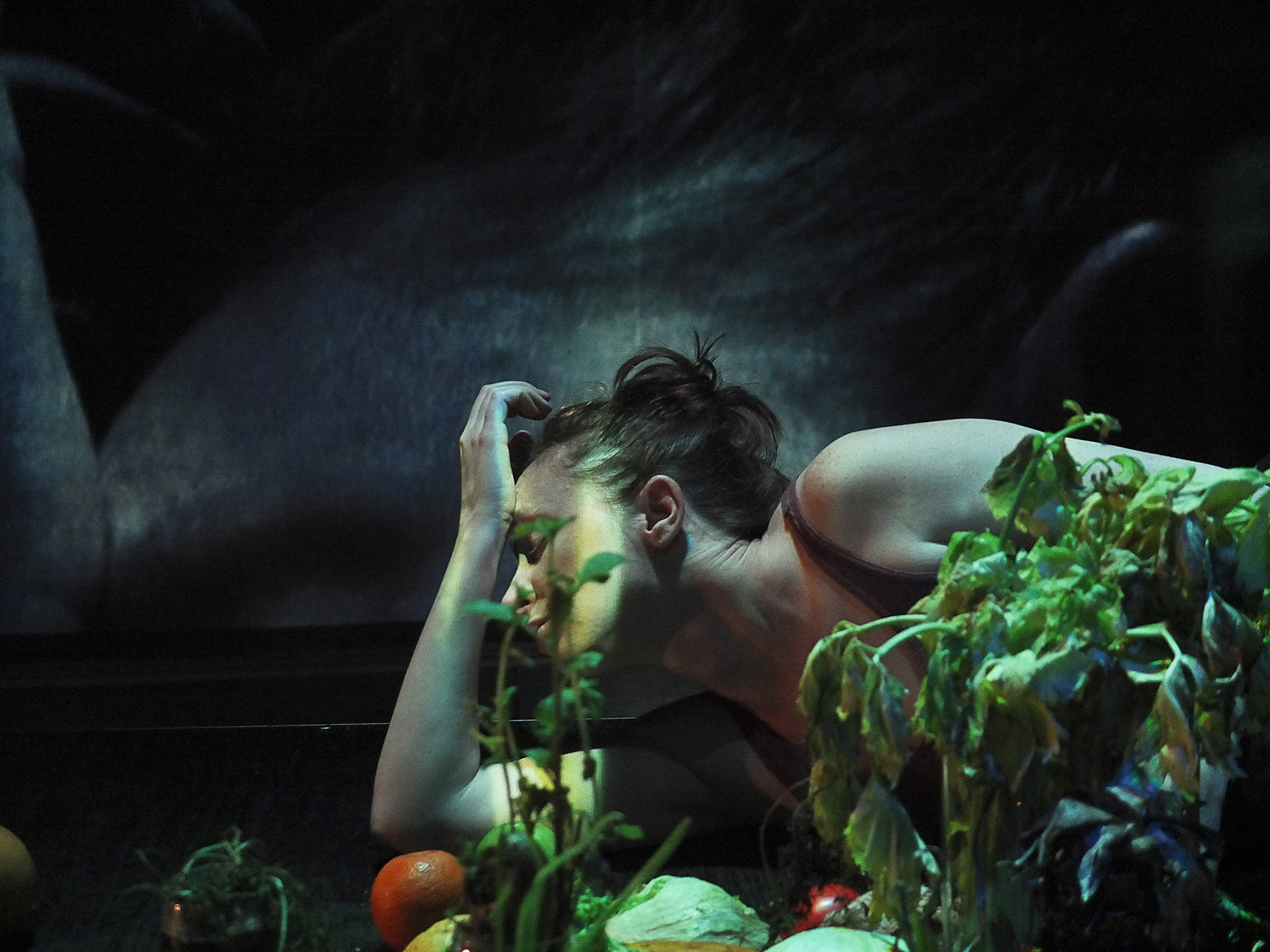 This is the first time Deep Dish is released in Spain (the first show was in Tanzquartier Wien in 2013). Has the performance evolved somehow since then?
As you saw yesterday, this is a live action film; it’s basically a one-cut movie. There is a big screen on the back, and then there are the table and the camera. This performance has funny changes because it’s alive – it can be completely different tonight. The bigger changes happen with the fruit, for example, as you don’t find all of them every season; it depends on the country you’re performing. Sometimes, it’s difficult because it rots – and, usually, fast.
The other thing is that the dancers are not just performers but also actors. The cameraman has to be exactly in the right position and, if they are in another context, it means something completely different. But the story is always the same, and I think it was meant to be like that even seven years ago.
We were impressed by the audiovisual effects. As the choreographer and Art Director, do you also take care of the atmosphere, the music, etc.?
No, the sound comes from Andreas Berger, who’s the sound designer and one of the founding members of Liquid Loft since the very beginning. But you must know that we have worked together every day in the rehearsal space for almost ten or fifteen years now, so we know each other well and we don’t even need to talk.
How do you translate the narrative story in terms of dance movements, as the tempo seems quick, almost spasmodic?
There are different contexts also. The movement quality is always related to the film. For example, it becomes fast-forward if they are stressed, or slow if you want to freeze the tempo, like a movie still. Or if you want to make a cut, you cut it and then you are in a different situation. You can even rewind, go backwards.
Another thing that we figured out is that improvising with the fruit and the camera is so fascinating that you have to make a strong contrast: to do this colourful and fruitful garden, I think you have to make the movement choreographed with a visual effect in the background or put the body always in front of the screen and the audience.
There are also some other things like the stress or the emotions which are often produced; the movement often comes afterwards. We were thinking of what was necessary, and I promise you I wanted to make a real dance at the beginning – with movement and crazy things – but it was too much, so we figured out that the more you take away, the more intense is the movement. There shouldn’t be too much movement. 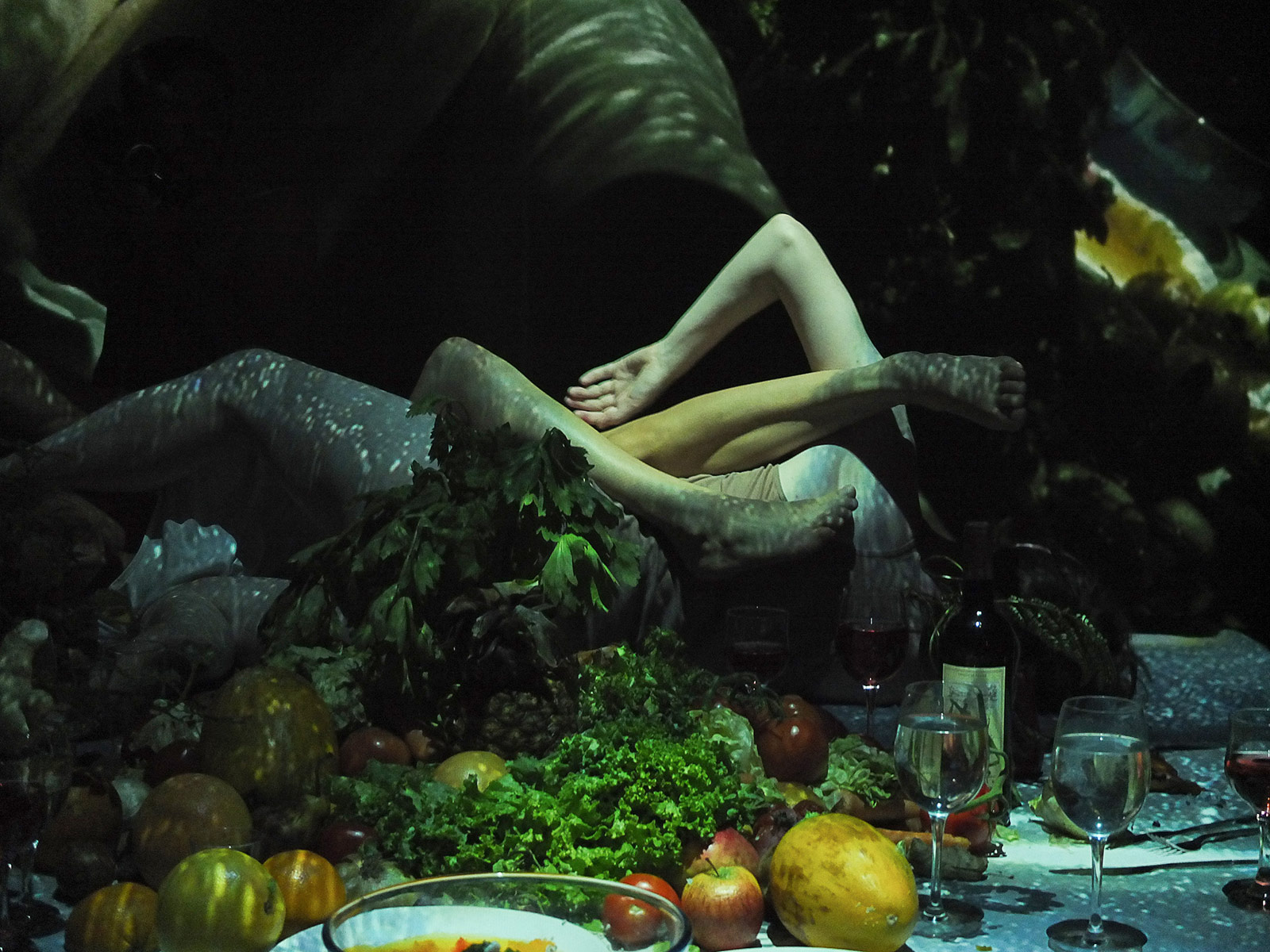 The casting includes dancers, actors, etc., so there are people coming from different educations and disciplines.
It depends on their background education but almost all of them have acting experience in films. Stephanie, for example, the Canadian girl who ‘had to tell you something’, has also participated in professional movies, and Catherina, who is German, is also between films.
Deep Dish is part of a series The Perfect Garden. Are you working on a new choreography? Why the idea of the garden?
Generally, with Liquid Loft, one piece is not enough to tell what I want to say. I need more but I can’t do a show for two or three hours (this one is one hour), as I can’t keep the concentration longer (laughs). But The Perfect Garden series is produced in collaboration with French artist Michel Blazy, who is fantastic and inspiring, especially because he works so much with organic material.
When we started to create this performance (not this one, but the first of the series), I was looking for an artist who worked with fruits in the form of installations. He basically created this artificial garden, this artificial paradise that has a lot to do with the vanitas motifs. The Garden of Early Delights by Bosch was one of his main inspirations – the idea of the garden has been a recurrent theme in art for thousands of years.
Can you tell us something about your next projects?
When we founded Liquid Loft, we always had the idea of putting contemporary dance in context with other art forms – I think that just dance itself is a bit boring. Contemporary dance has to be also in contact with contemporary topics, and I think we always try to involve art, electronic musicians or film directors (and also dancers). They’re taken out from their selves to see from another perspective, which is important for the exchange.
Our next project is a release in Vienna next week, titled Models of Reality, which works with the idea of Bauhaus, as it’s the 100th anniversary of the art school this year – this show is more related to architecture. What we did is to record the sound of materials like the rustling of the leaves, the crunching of gravel, or sounds that arise from the friction of surfaces such as concrete, glass, and paper. These sounds remind us that rooms are also choreographed sound processes and are brought together with some movements. If you relate it with sounds, it creates authentic emotions. 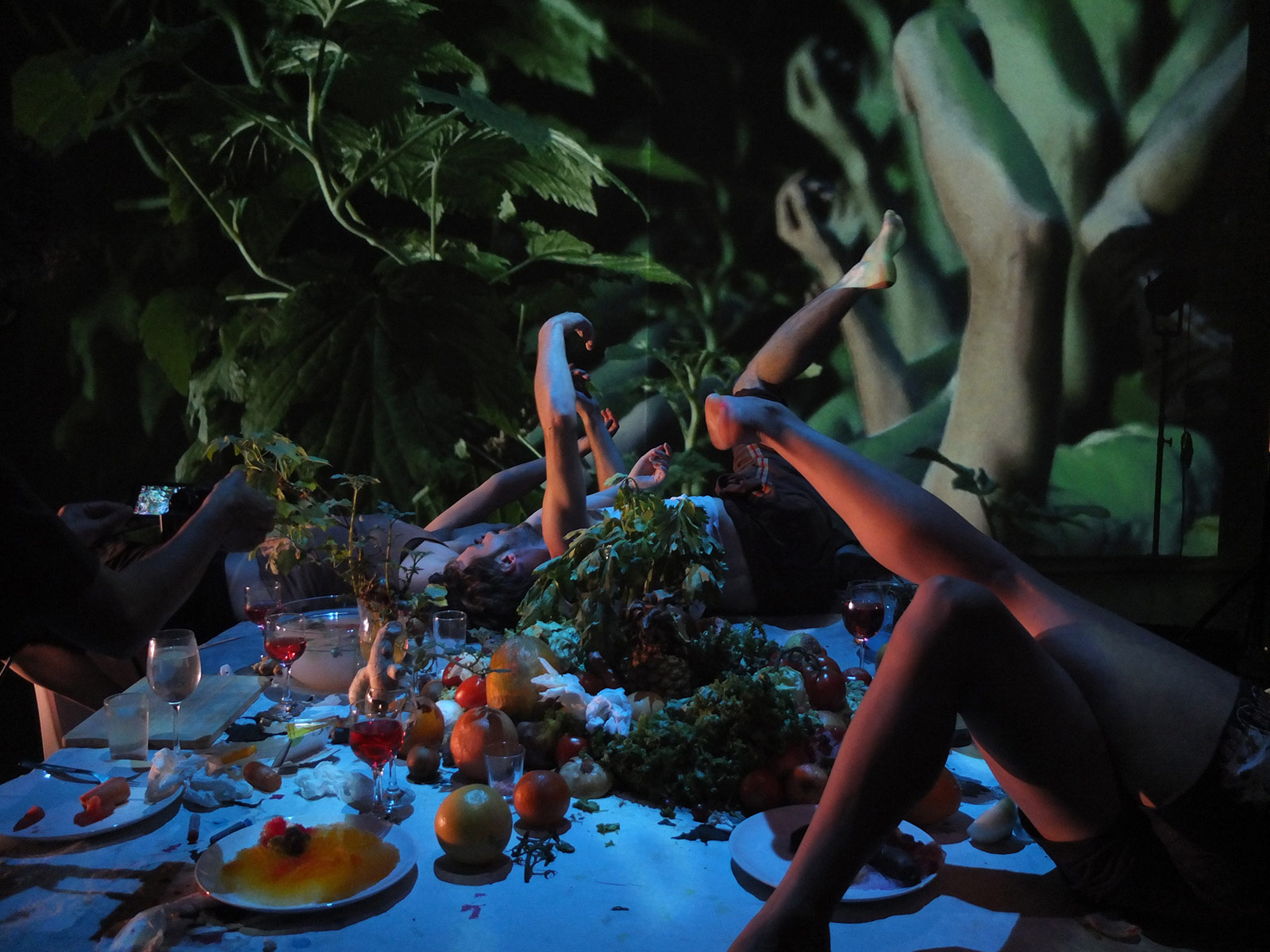 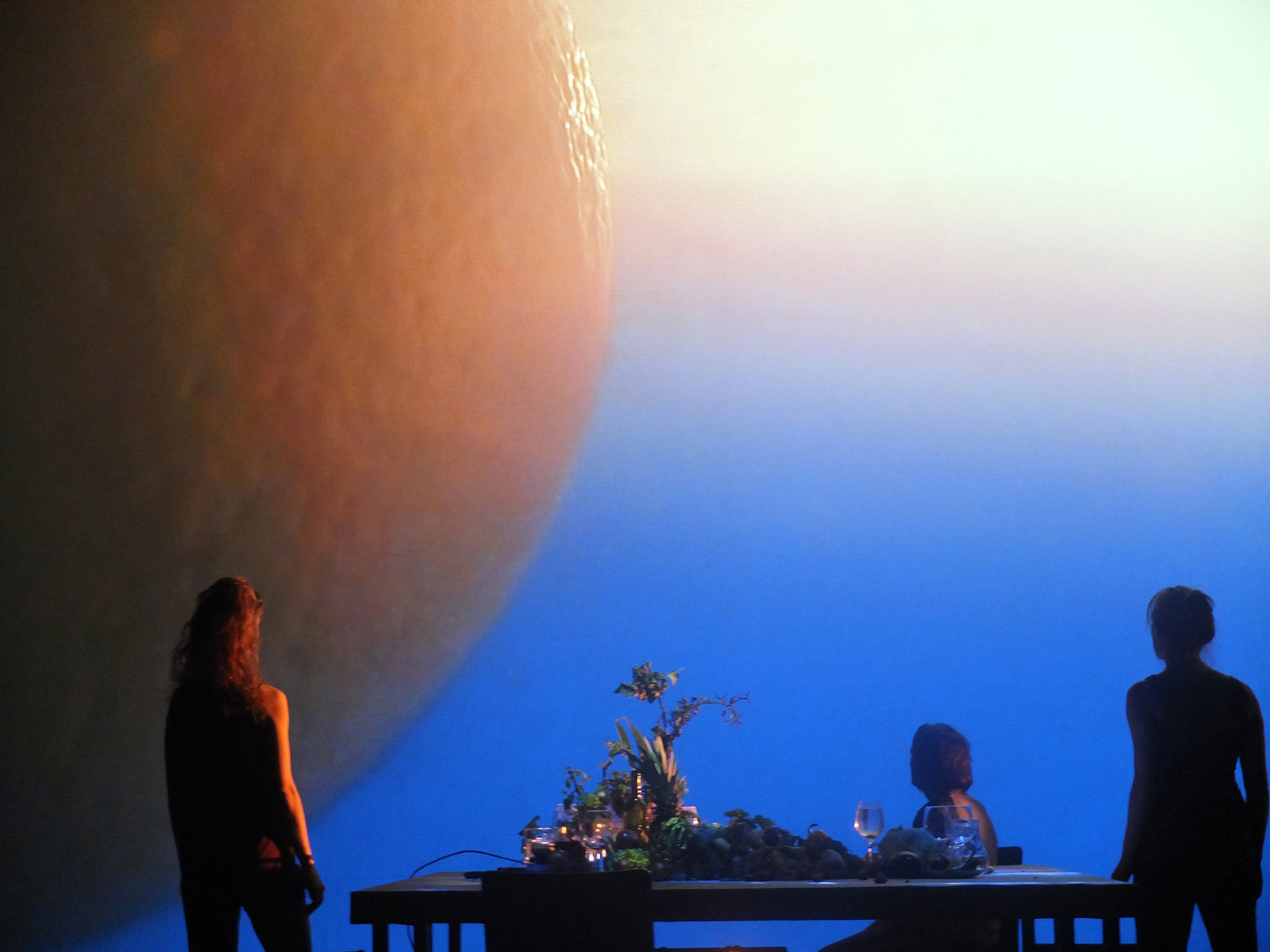 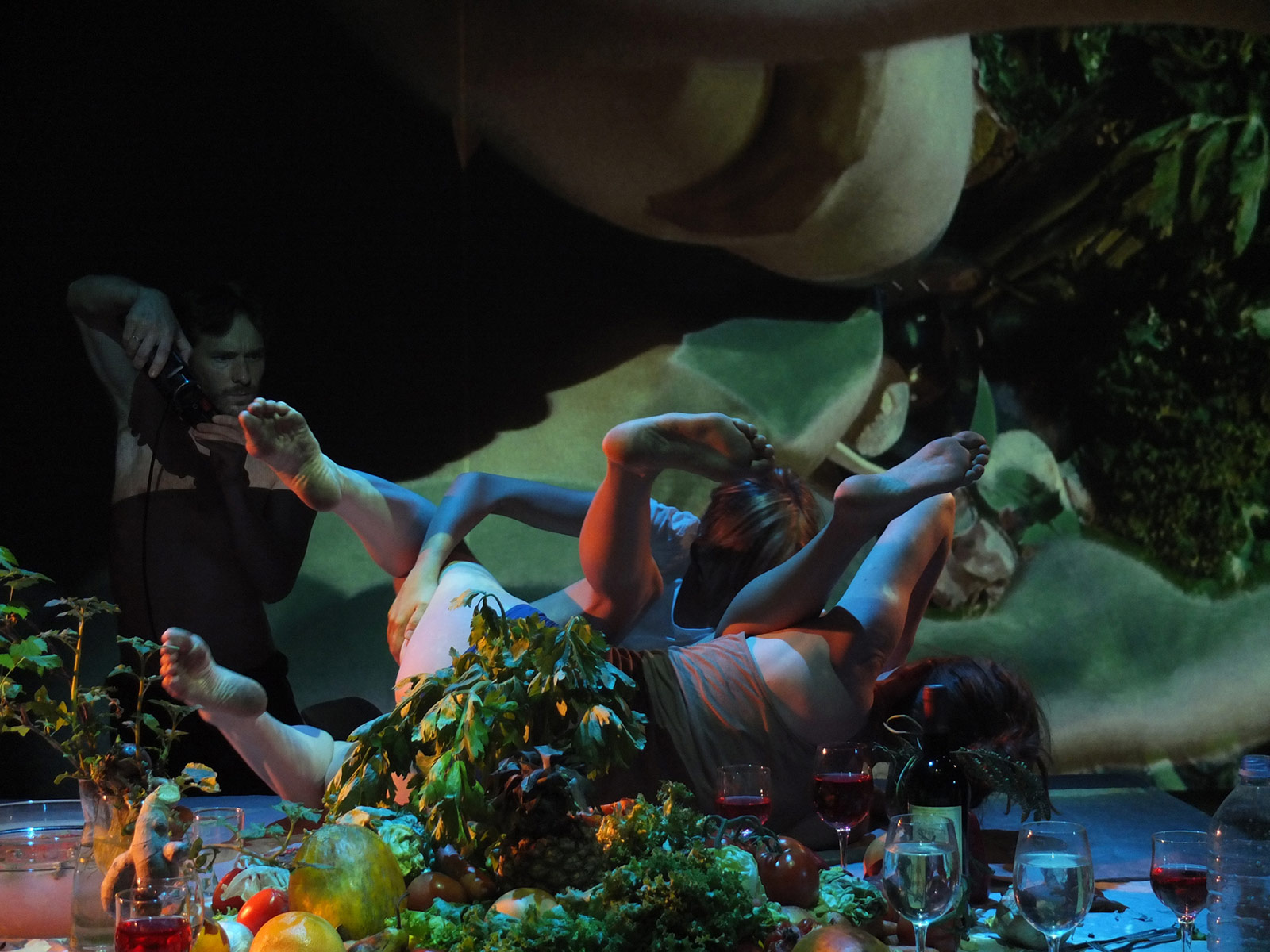 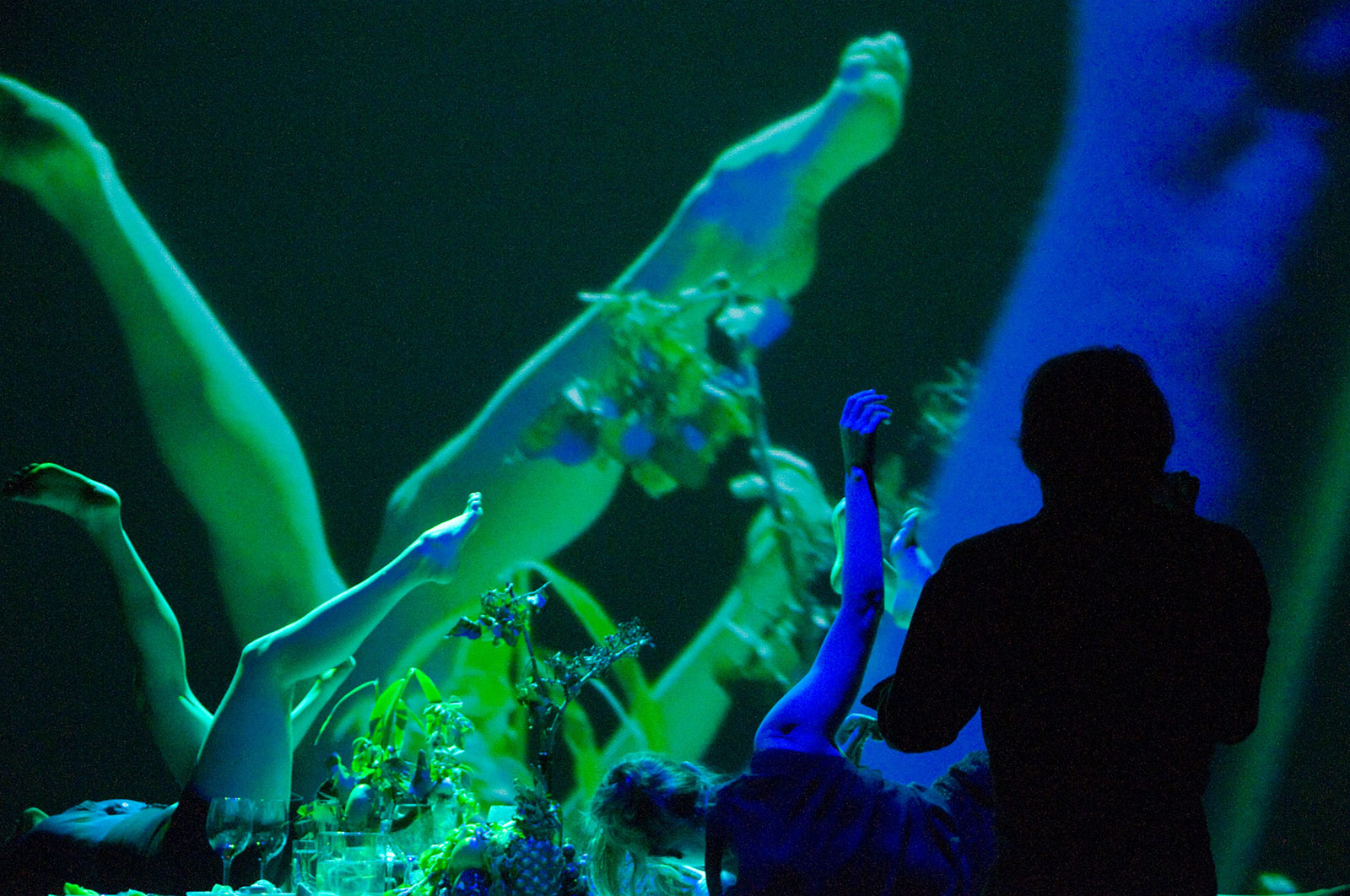 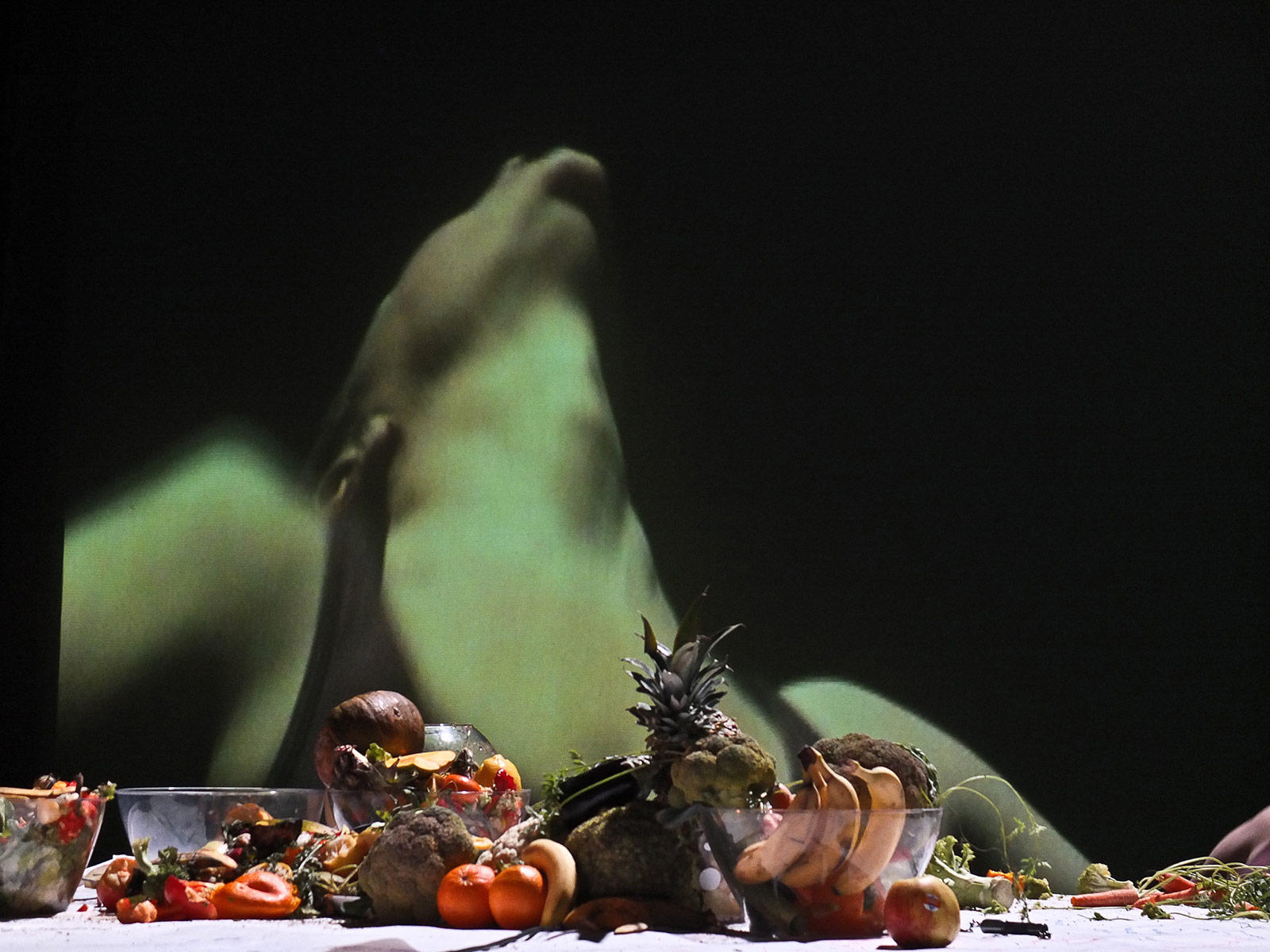 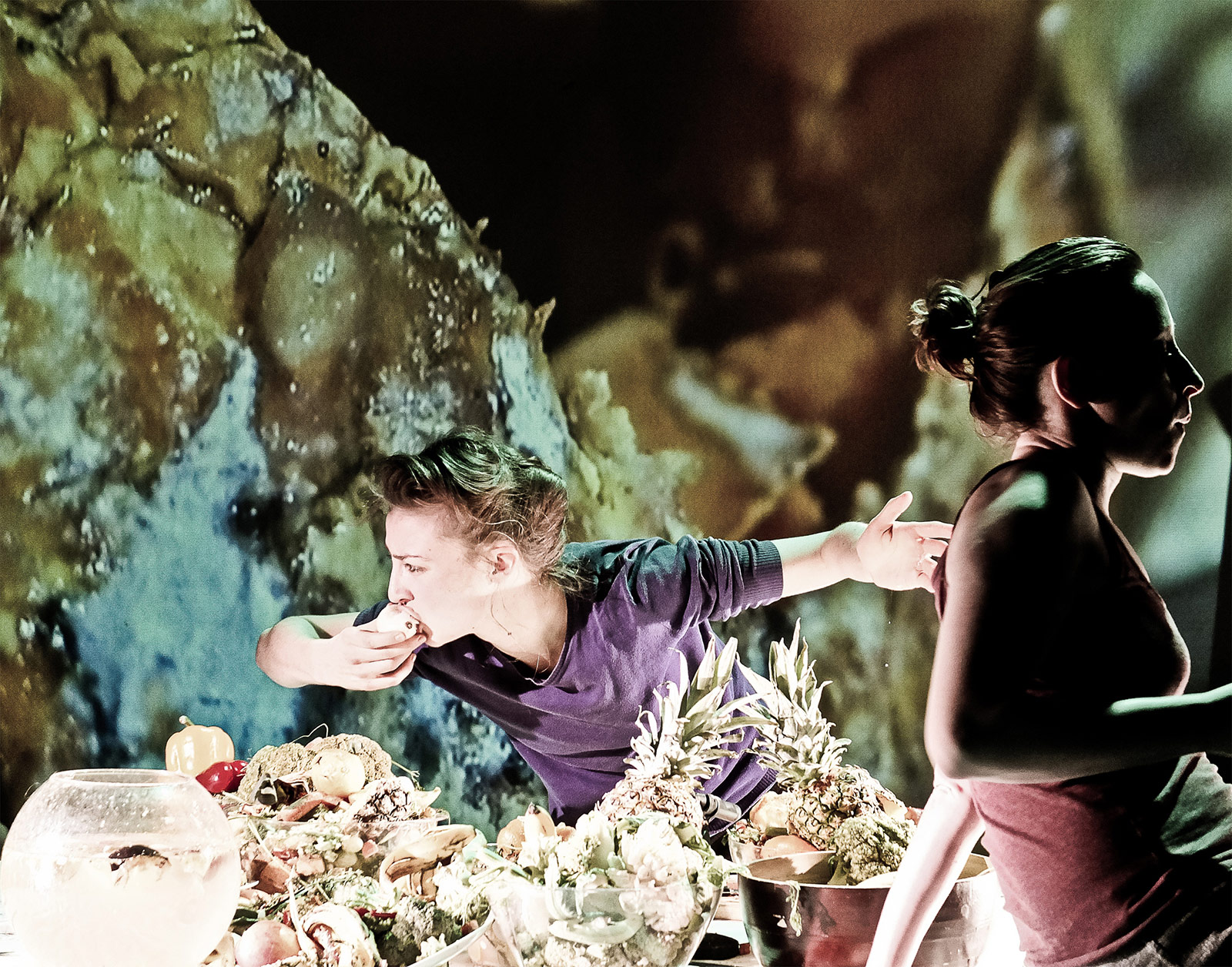 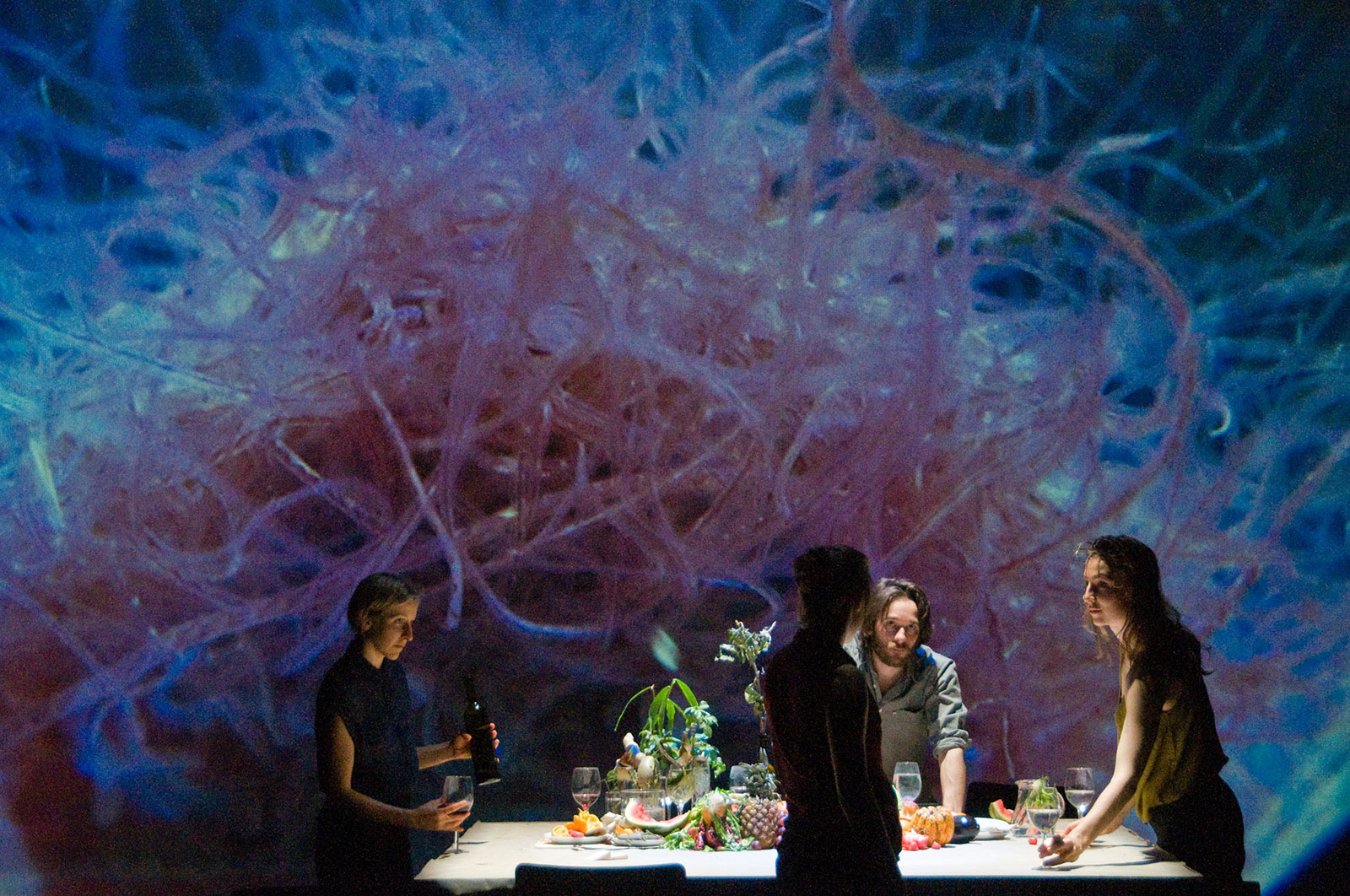