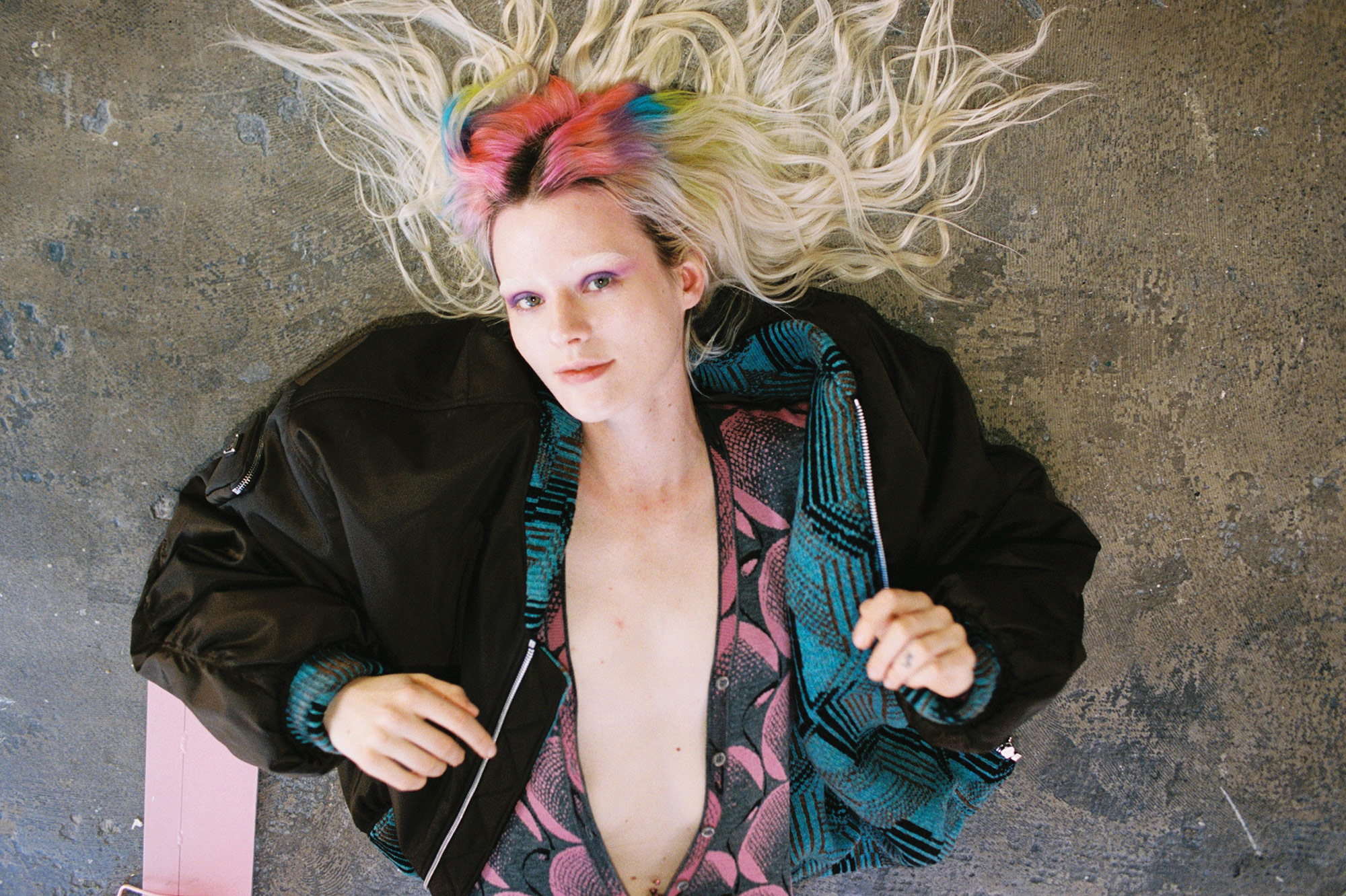 “Is making things artificially scarce, a stunt that isn’t new in the art world, really an accomplishment for the digital medium that by design is infinite?”, asks Arvida Byström ahead of the opening of her recent exhibition Artificial Scarcity at Stockholm’s Gallery Steinsland Berliner. The digital artist and model is a notorious internet persona, having come up in the golden age of Tumblr, alongside the likes of fellow post-internet stars Petra Collins and Molly Soda. Her bubblegum-hued works interrogate how our perception of reality and identity is moulded by technology, whether that’s implanting NFC chips under her skin, exploring the effects of Instagram censorship on the female form, or writing a monologue for Siri as a femme bot.
Interview tak­en from METAL Magazine issue 45. Adapted for the online version. Order your copy here.
Byström’s exhibition took three symbols, a Beanie Baby, a tulip, and an NFT – objects that, she explains, have all been subject to economic bubbles, albeit hundreds of years apart. Considered the first recorded speculative bubble in history, Tulip Mania came at a time in 17th century-Holland, when the price of the recently introduced bulb soared to staggering heights before undergoing a dramatic collapse only months later. The frenzied investment of Beanie Babies – the famed 1990s plush toy – two centuries later would repeat a similar pattern, with some of the rarer items reaching up to six figures on eBay. But Byström maintains, “This wasn’t so much false scarcity but artificial scarcity, or a feeling that something being rare can jack up the prices of items.”

The addition of NFTs marks a new frontier: Web 3.0. Characterised by its use of blockchain to create decentralised platforms, the medium suggests new possibilities removed from its private corp-dominated forebearers. Still, it’s a divisive subject: should we even be striving to make the medium exclusive when digital goods are, by design, limitless? By drawing on the past and present, Byström highlights how the price of an artwork affects how it’s perceived, from now to the future and beyond.

With an exploration of artificial intelligence sex robots in the works, Byström hopes to push her past explorations of female identity and technology even further. The topic is particularly pertinent in a time when the pandemic has narrowed human connection to the four corners of a screen, with many flooding the virtual world for a semblance of human connection. Sex or, more extensively, digitalised desire, is a logical extension of this. Evoking Žižek’s notion of sexual desire as a sort of distanced fantasy, Byström’s work invokes questions surrounding the feminised digital entity, identity, and agency. 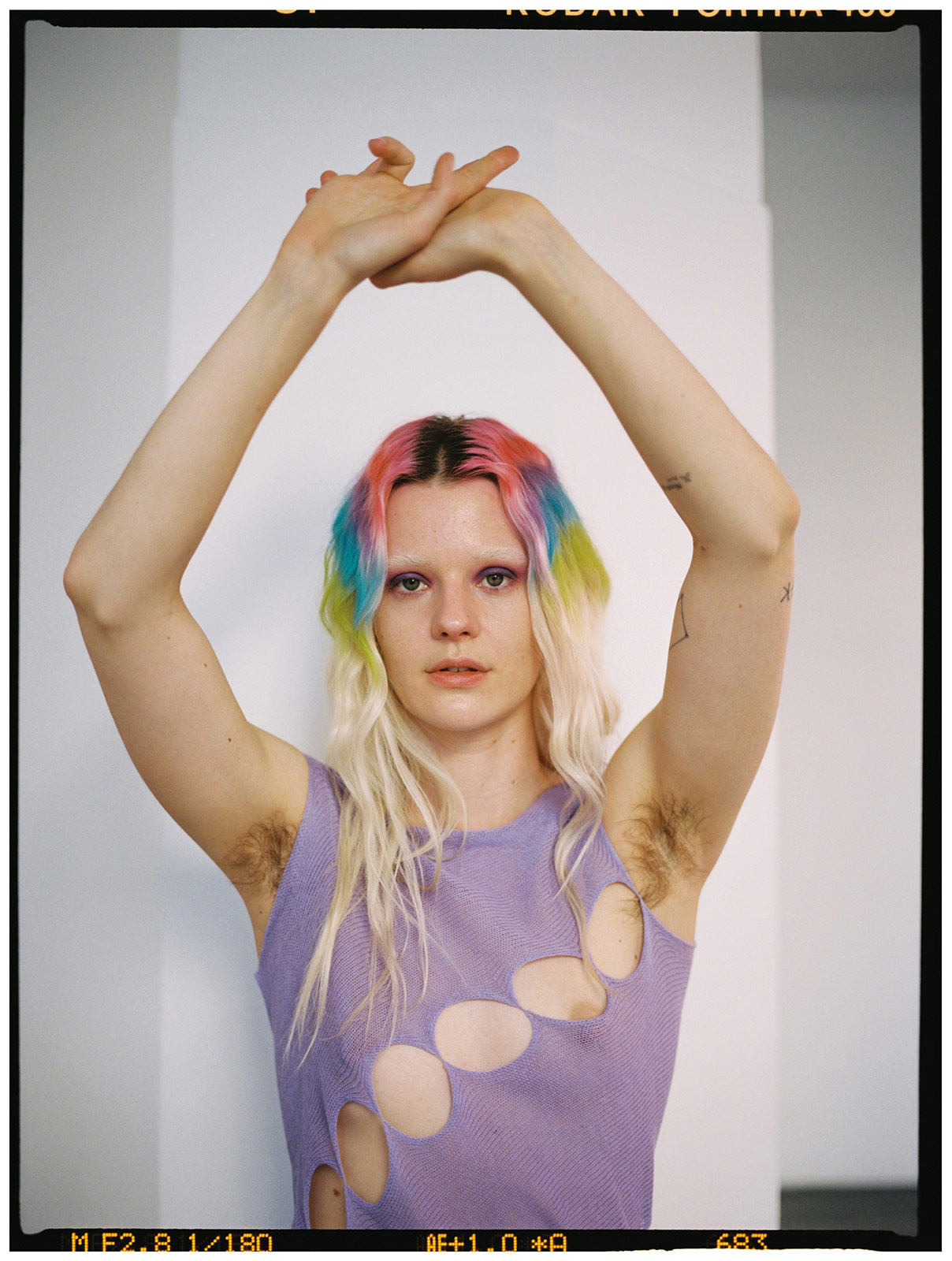 Dress JOSEFINE GYLLENSVÄRD.
You’ve just finished up your exhibition Artificial Scarcity at Stockholm’s gallery Steinsland Berliner. Could you tell us about it?
It’s basically about how our relationship to objects change when the price tag changes, which I demonstrated using three symbols: tulips, Beanie Babies, and NFTs. I’m interested in why we take something that’s inherently infinite by design and render it scarce. And the answer is obviously money.
What is the history of the tulips creating artificial scarcity?
The first capitalist economic bubble was in the 17th century in Holland. It was a speculative bubble of tulip bulbs. The feeling that something is rare can jack up the prices of items.
NFTs have been a particularly divisive subject this year, especially in the art world. What are your feelings towards them?
My base feeling towards NFTs is that they shouldn’t have to exist, because I wish that art funding didn’t have to be so attached to private collectors who dictate what should make it in the art world or not. So, I don’t think it’s necessarily something to romanticise. Saying this, having art is a responsibility because you have to make sure that it’s well-kept and taken care of. So, some parts are fine, but it’s not very different from what the art world has looked like for a very long time.
I agree. I feel like the same thing that happened with social media is happening with NFTs. Like, it was sold to us as this utopian vision. The argument that NFTs are democratising the art world doesn’t work, because it’s still the same people with the money. The only difference is that it’s cryptocurrency.
I don’t think that decentralising things is necessarily good. It always has to happen in the right way. I think it’s funny that everyone thinks decentralising is the best thing ever, but it completely depends on how it happens and how we do it. If you decentralise in a way that’s super neoliberal, that’s not something I want to get behind.
I was reading about cloud feudalism, which basically states that the way the internet is run (ie. big private corporations) resembles a medieval way of living. This obviously goes against the utopian vision heralded by early cyberfeminists. Do you think there’s a way to overcome this?
I hadn’t heard of that but that’s very interesting!
You’ve recently released two NFTs as part of the exhibition. Why was this something you wanted to explore?
The NFT in the exhibition is tied to half an ether. And if you buy the work, you’ll also own the ether. But if the ether gets sold and separated from the work, then the work will destroy itself. So, it’s a commentary on the worth of the work and the ether’s worth. But what’s interesting is that the NFT isn’t really tied to the artwork; it gets tied to the artwork through websites. But if something were to ever compromise the website, it would be really hard to know what that NFT represents.
Yeah, it’s that divide between the artwork itself and its ownership.
To be honest, it’s very similar to how the art world works today. It’s essentially a document to certify an artwork – like how if you have an artwork that’s easy to replicate, you need the paper to authenticate it. 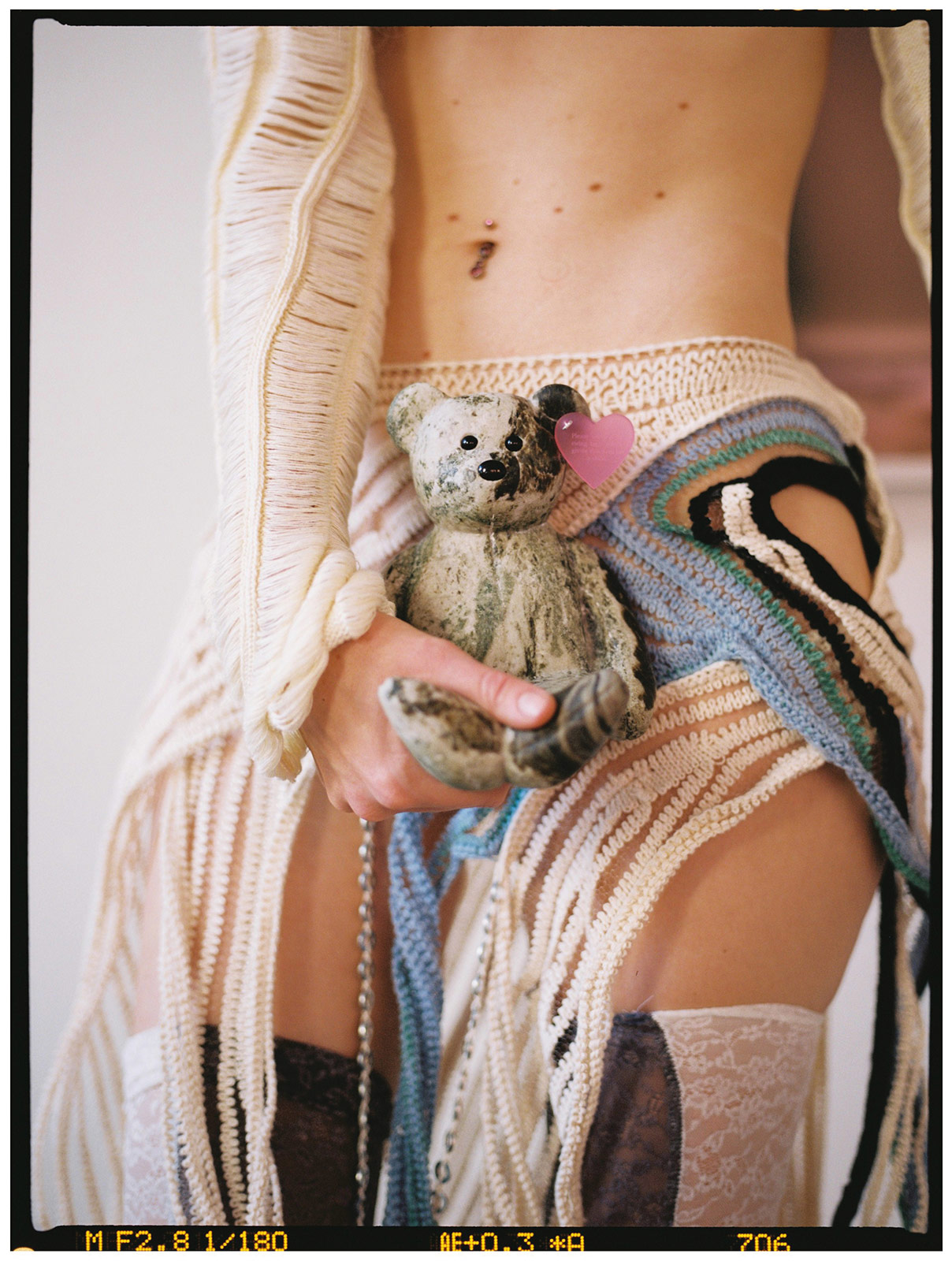 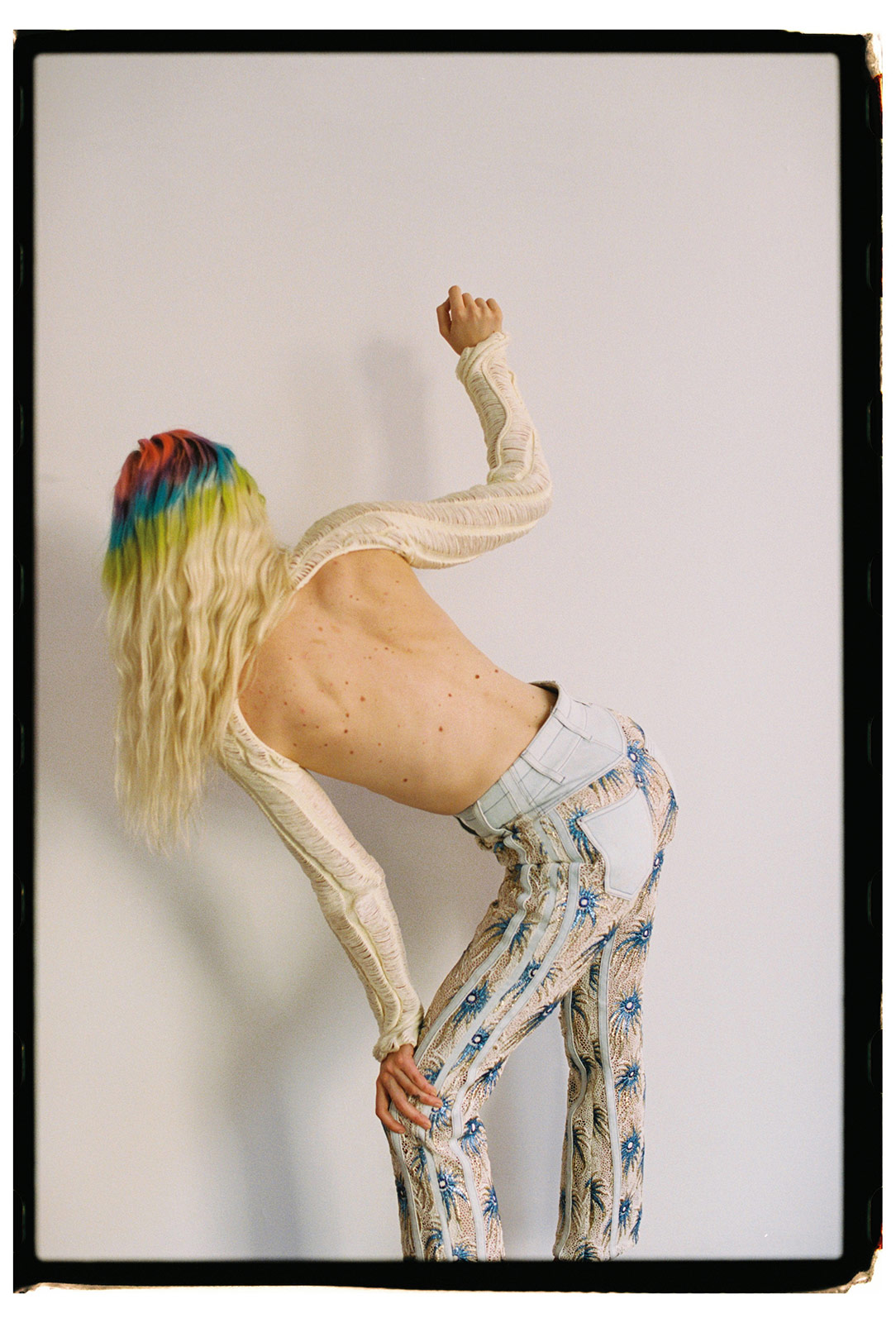 Knitted top EMMA GUDMUNDSON, trousers LOUIS VUITTON.
Calling these systems terms like ‘cloud’ makes them sound so innocent, or cute, almost
It’s very adorable wording. It’s also funny. There’s this talk by Helen Hester – there’s also a text called Technically Female – where she goes on about micro labour, which is basically all the labour we take on through technology. For example, self-checkout at a store, which isn’t easier for us, actually. We still have to learn a lot to check out at a store. It’s more complicated than if we just went to the checkout clerk to do it for you. So, through technology, we take on these laborious tasks. She also looks at older interpretations of technology in movies, where computers are usually male. But then, eventually, when it comes around to it, we have all these cookies and clouds.
Holly Herndon has recently released a vocal deepfake called Holly+ where you can essentially turn any input into her voice. How do you think the potential of AI translates to art?
I’m interested in whether AI can make more pleasurable and maybe even political and thoughtful art than we can. Should we even make art then? Should we only make art for our own stimulation? That being said, I think it’s interesting how it makes us question our place on Earth. As humans, we see ourselves above all the other animal, and maybe AI will make us a little bit more equal to them. I’m still figuring out the AI sex doll thing, but otherwise, it’s quite exciting to start playing around with all that.
Let’s cast our minds to your next piece. During the pandemic, the sales of sex dolls rose – we would expect that to be because of the lack of human contact, but interestingly it was mostly couples inviting a new member into their intimate relationship. Žižek argues this is because of a psychological need to invest sexual desire through a sort of distancing and fantasy. What do you think about this idea? What drew you to sex dolls?
I think sex works best in imagination, so I am not surprised. Having an entity to project things on that you later don’t have to relate to as a subject or that can disturb that sexual idea could be great. I am interested in sex dolls because they are a feminised digital entity, at least the AI ones, and, also, I think people get irked by them for the wrong kind of reason.
What is the role of the human in AI art?
Possibly to question ourselves and to question in what way art is great for humans. If we say that AI will make the most beautiful, divine art, maybe humans can stop making art for the sake of exhibiting it to others to make it just for their own urge instead. Maybe it will make us less centred around the artist as a subject and it will make us start making art to relate to others, to make art in groups. I think it could completely overthrow our relationship to art today.
Is it necessary to differentiate the human artist from the AI artist?
Humans care about incentives, and computers don’t have incentives in the same way as humans.
If AI creates art and it is sold, who benefits and why?
I imagine the person owning the robot benefits financially until robots get naturalised. I mean, it is kind of sad if this is seen as a cultural surplus, I think this money should go to the artists, the engineers and the workers in the art world and not to the top.
In order to differentiate AI artists from human artists, should we create a capitalistic personal brand, or find the primitive and natural side of the human essence to distinguish ourselves from machines, softwares and intelligence we are making?
Neither. I think we should just lean into [believing] that maybe the actual end-product shouldn’t be our goal. I think it might make us less individualistic and more community-driven. If robots will make better personal brands than humans, then I will hope that humans will stop tinkering on their personal brands. The worst-case scenario is if we see this as a sort of cultural surplus that won’t profit the workers. But maybe, then, there will be a cultural revolution where humans will completely reconsider what art to enjoy.
Is creativity an exclusively human urge?
Well, other animals don’t seem very interested in making art. I think computers are kind of the same, they make it because we made them make it. They are yet to have their own emotional urge to do so. 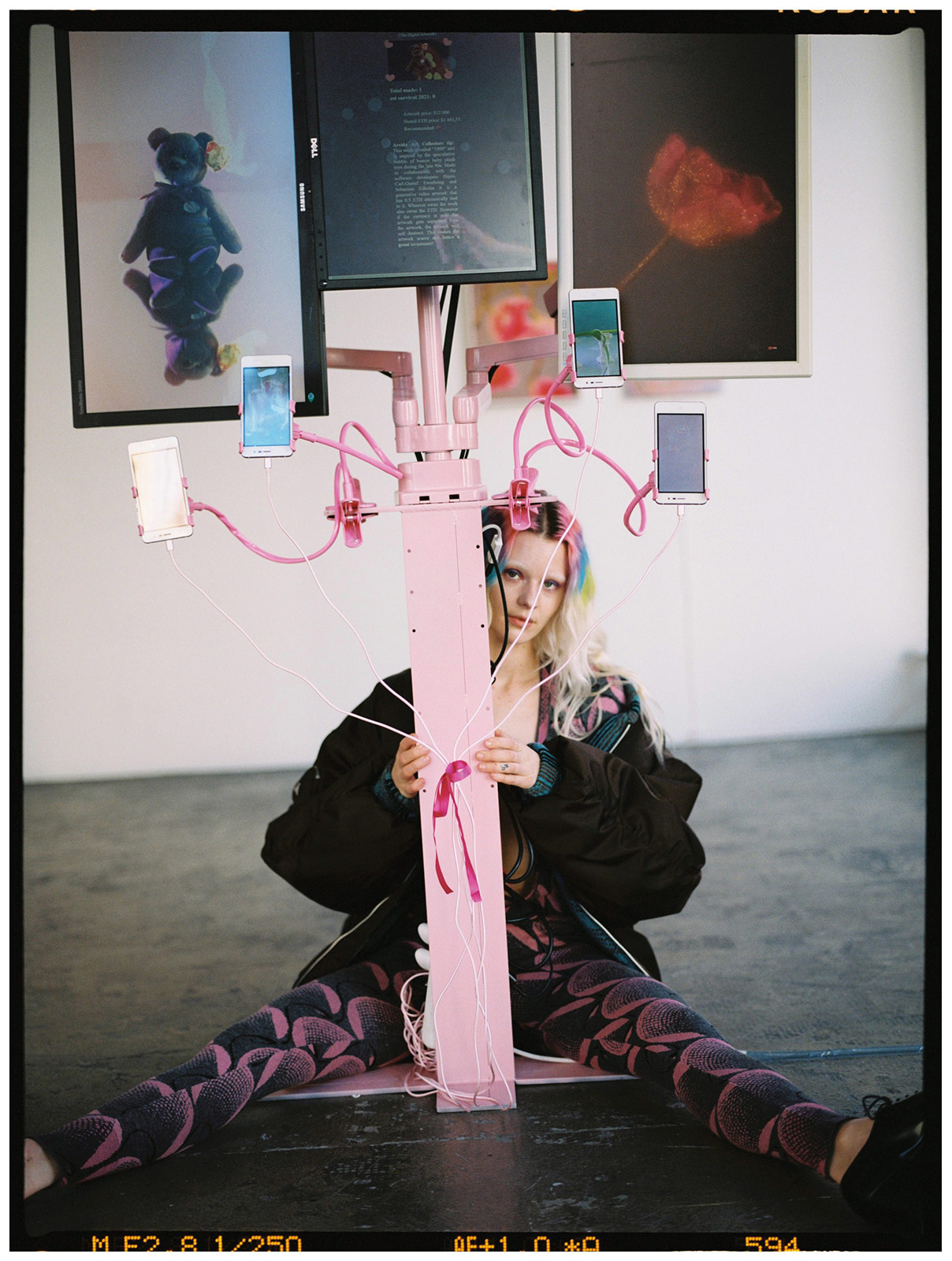 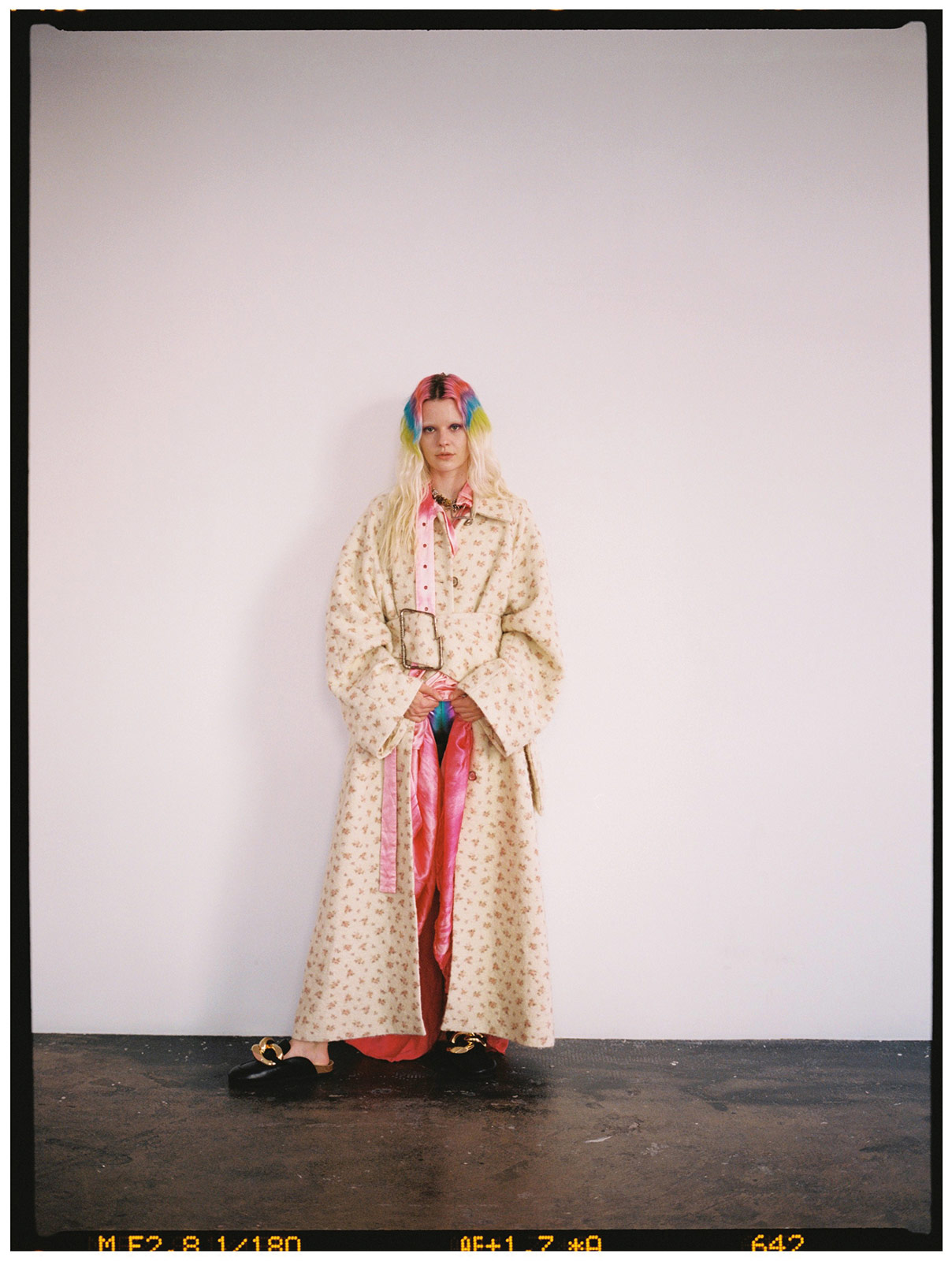 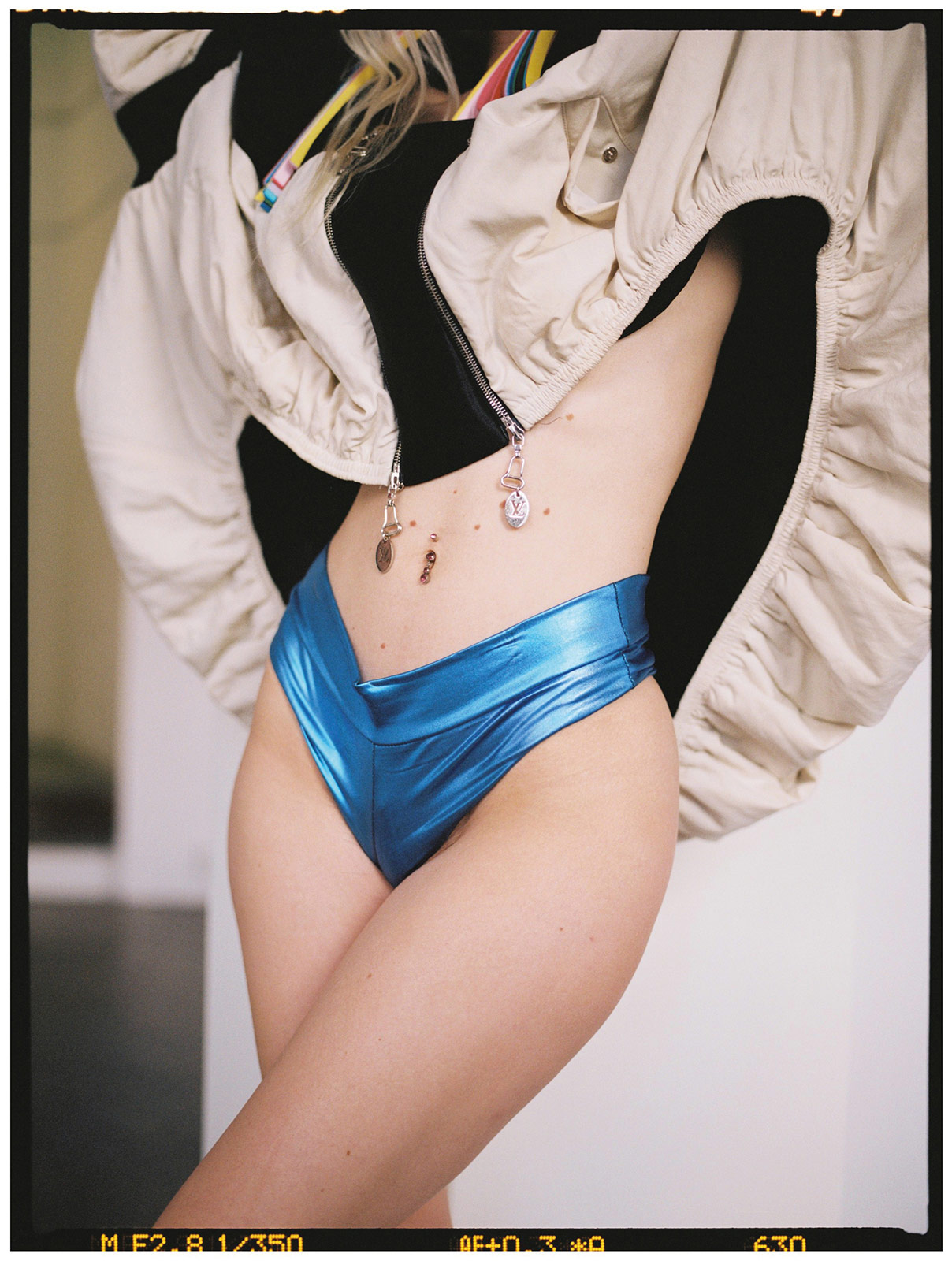 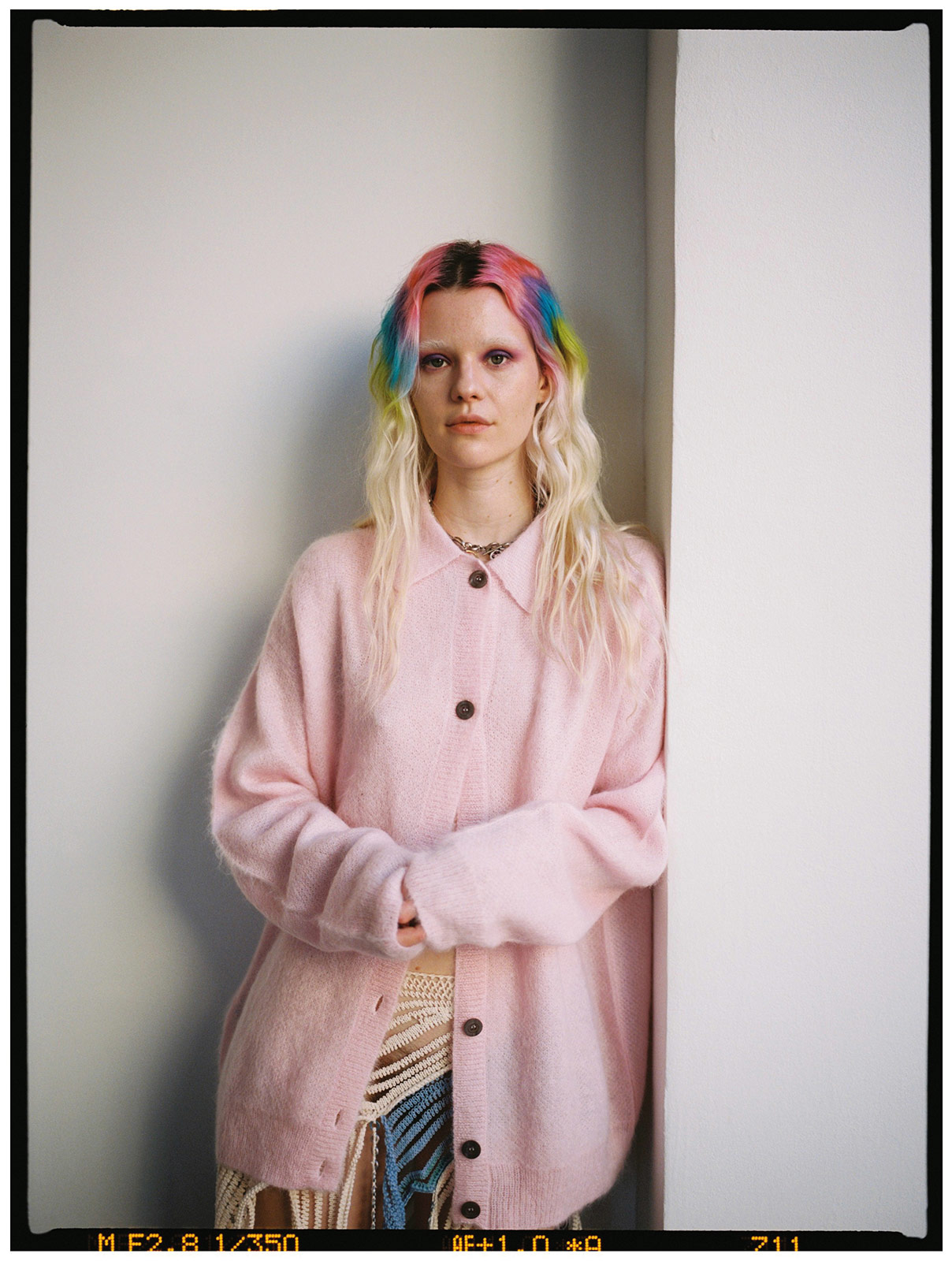 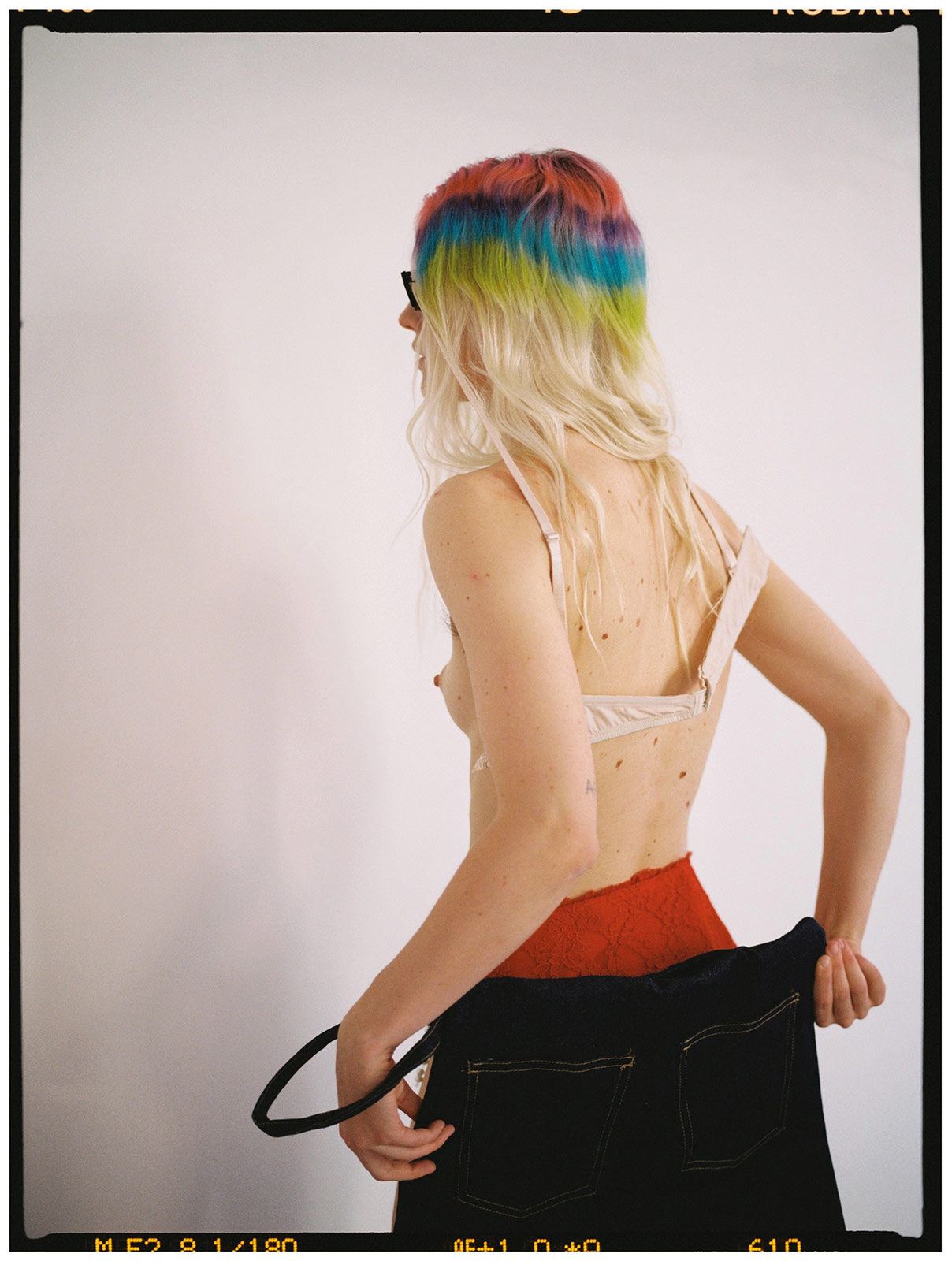 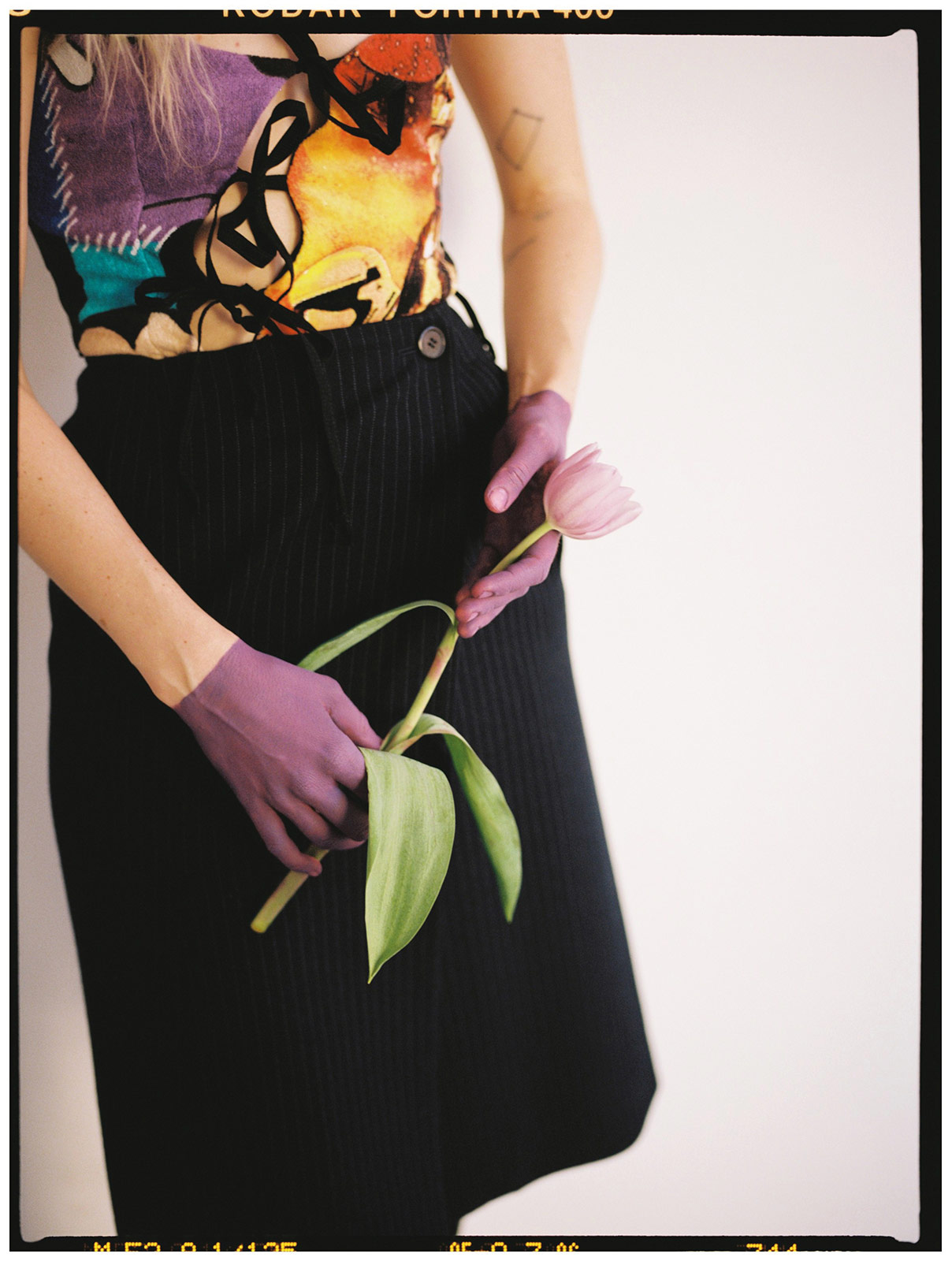 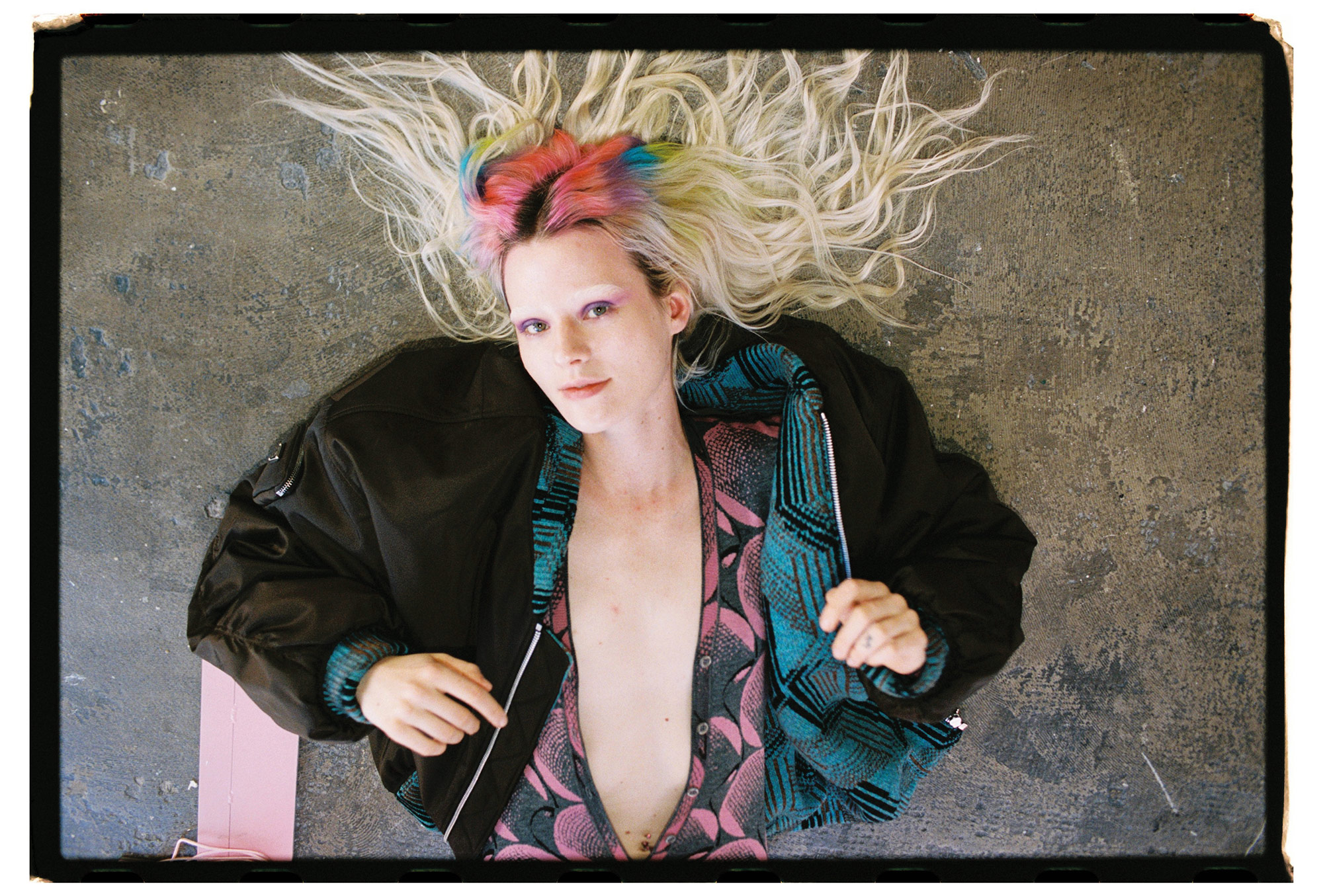