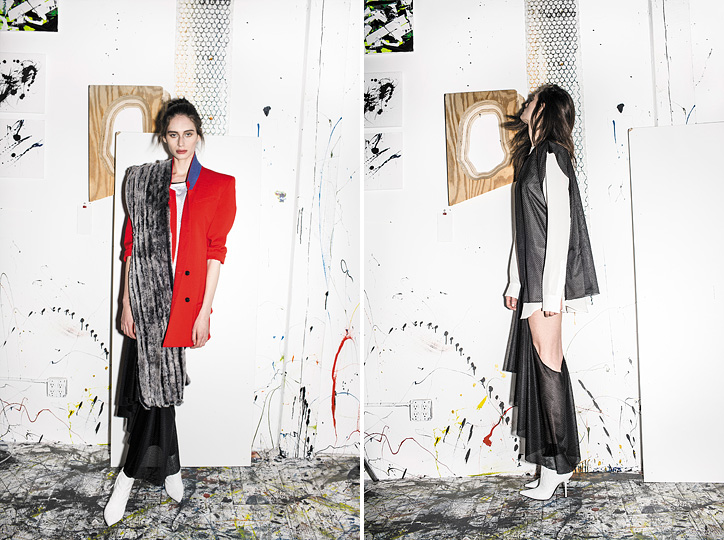 Aristotle Rosario’s namesake line is the product of a global mix of experience and inspiration: Rosario was born and raised in the Dominican Republic, was motivated to start his own fashion house while living in Paris, and now creates it in New York. The designer pushes boundaries in the blending of masculinity and femininity, creating clothes for a strong, confident and sexy woman. His bold designs are unique and edgy yet effortless and wearable and, above all, empowering. We caught up with Rosario right as he was about to release the lookbook for his FW14 collection.

Can you talk a little about how you go into fashion? Did you always want to be a designer?

I didn’t. Fashion was one of those things that just happened organically for me. I always took drawing and art classes since I was a little kid, I’ve been drawing for as long as I can remember. My mom had me in fine art classes from when I was five or six years old. So I’ve always had that talent for drawing and painting, and I’ve always had that passion for shapes and colours. Then, as a teenager, my friend – this is where I’m from, in the Dominican Republic – started taking modeling classes. And she actually introduced me to that world, to fashion magazines. I thought I was going to be an architect, I didn’t know I’d end up in fashion… I went to art school in Dominican Republic and studied in their arts program for two years. They’d been affiliated with Parsons since the ‘80s, and I got a scholarship to study there when I finished the two-year program. So, I moved to New York to finish my design studies there. Tim Gunn was actually the head of the international program at that time, so he was a mentor to me, to us international students at Parsons. I knew I’d want to move to New York to launch my career in design, I knew I could do more there.

You moved to Paris for a while, too. Did you launch your line there?

I’ve lived in several places – I lived in California for five years, LA and then San Francisco. After working for the Gap there, I needed a creative break so I moved to France. I was really influenced by the city – it’s so amazing for fashion and art – so I thought, when I get back to New York, I have to start my own project, my own line. So, I had the idea to start my line in Paris but launched it in New York. I actually had thought I’d get more into photography, I was doing fine art and fashion photography, but I kept coming back to fashion.

How was creating your very first collection?

It didn’t happen overnight! I launched it for Fall of 2013 but I started working on it in 2011. Coming back to New York, so much had changed in the garment industry and fashion industry since I’d left. I had to completely start over really, and re-establish connections, make contacts with factories and production. All of that took a while, but it started happening, it started spreading by word of mouth. And also, I had to test my vision, I had to see what my aesthetic even was. I had to see it, see what my womenswear would look like. So it all came into fruition in 2013. TLast year, we did an event with Bloomingdale’s, called Be Seen. It’s an event showcasing new and exciting designers. That was the first time we got to show the line. The fashion director loved my designs, and said they had to show it, so I was picked to be a part of the event. Our runway looks were on display in the windows and the line was in stores for a week, right at the start of Fashion Week. It was really great for us. And we’ve been getting great press and talking to magazines through our PR, Omen. So it’s been amazing, it’s been really fun.

Inspiration can come from anywhere. A lot just comes from people watching. I love to people watch, like see regular folks that have nothing to do with fashion. It's really interesting to see how people put themselves together. You know, there are people who dress for attention, and people who just need to wear clothes to not be naked. I think I'm more inspired by regular people than fashion people.
I'm also inspired by art. I'm a member at the Met and live nearby, so I go whenever I have time. I walk around and dissect the art. I don't like to see everything at once, I like to totally immerse myself in one section at a time. And, of course, music. I can't work without music. One of my all-time favorites is Patti Smith. I draw inspiration from her sound, attitude and look. She was so ahead of her time. The woman in my head when I design is like her: a little wild, a little tough...not afraid to make a statement. I love that strong individuality.

So the woman you design your clothes for is a modern version of Patti Smith.

Yes - the woman I design for is not afraid to mix high and low, menswear and womenswear. I love how Patti Smith wore menswear...and I love women now who aren't afraid to wear menswear. I love that mix. At the same time, I also love to design feminine pieces. Like for Spring 2014, I wanted to do something that was almost like being naked, showing skin and from fabric that was so soft it felt like it was your skin - it felt like underwear, and there was a lot of sheer. I like a woman who can be feminine and strong in her sexuality but, at the same time, be confident in menswear and have that bit of masculine style.

Who have some of your biggest influences been?

I grew up in the Dominican Republic so I knew about Oscar de la Renta since I was a kid. It was this super classic style that was so influential to me. In school, I started to get more and more fascinated by Balenciaga. I learned about his work when I was about 17. I was fascinated by what he could do with fabric and how he could sculpt it. That inspires how I design now in my line. And of course, Coco Chanel and how progressive she was, pushing boundaries and being ahead of her time.
And there is the Japanese set, like Rei Kawakubo and Yamamoto… I still have the very first fashion magazine I ever bought, in 1994, and that’s when these Japanese designers and, like, Helmut Lang were so big. Fashion was different then and those aesthetics inspired me then and still inspire me now. I love exploring shape and volume, and working with strange things that might considered ugly. I am starting to explore different ideas of beauty. My first collection was more classic, but now I’m exploring more as I get more comfortable.

Your SS14 collection was inspired by Magritte's painting, “The Collective Invention.” What about this work spoke to you? Was there an artist or work of art that inspired the FW14 collection?

I’ve actually never seen The Collective Invention in person. But I love Magritte. I’ve always been so fascinated by his vision and is dream-like paintings. I’ve been wanting to do an entire collection of just one of his paintings and this one just really spoke to me. For the fall collection, I wanted to go more expressionistic, and get a little more wild. So, the colour palette comes from the work of Basquiat. I’ve been inspired by him since I was little. I’ve always loved his colours. I wanted that and its attitude in the collection. We shot the lookbook at my friend’s studio in Bushwick and it had that vibe, the splattered paint and everything.
I love exploring these clashes, like destroyed elements with clothing that is super tailored. I’m calling the collection Just Kids, after the Patti Smith book about her and Robert Mapplethorpe. It’s so beautiful and it’s so sad – she always comes back to me…I wanted the collection to have the vibe of something with that clash, and be a little wild and individualistic. 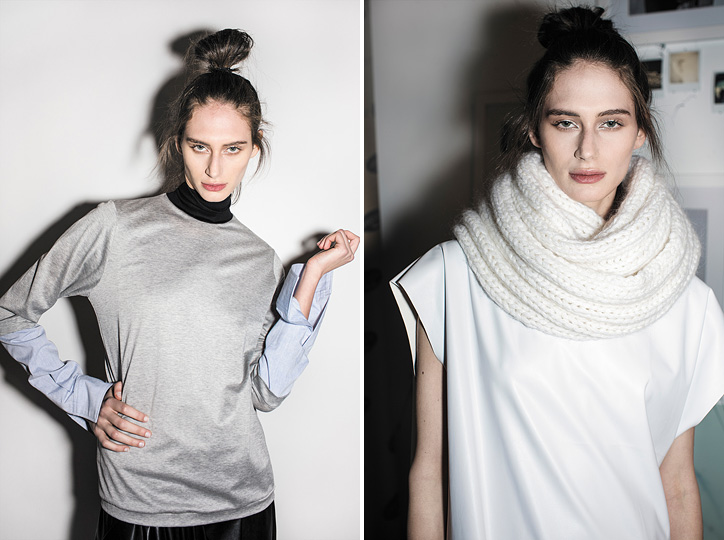 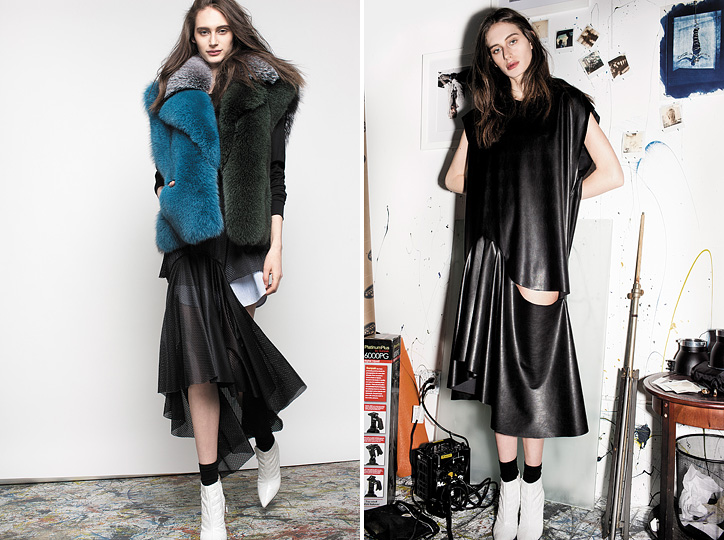 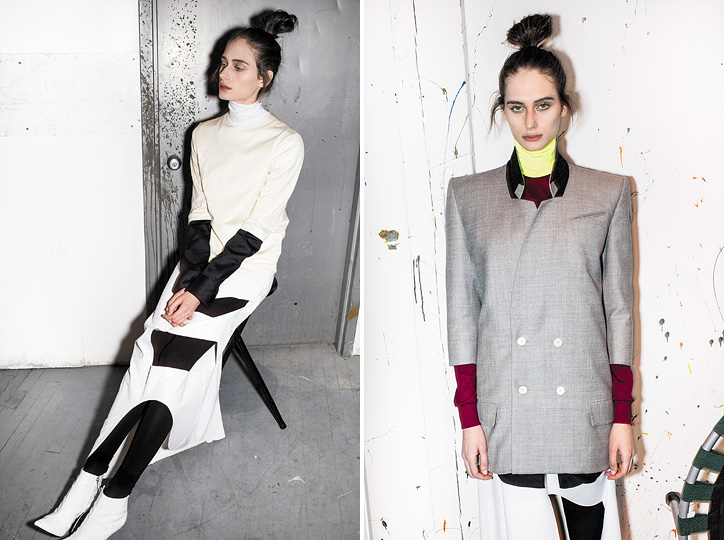 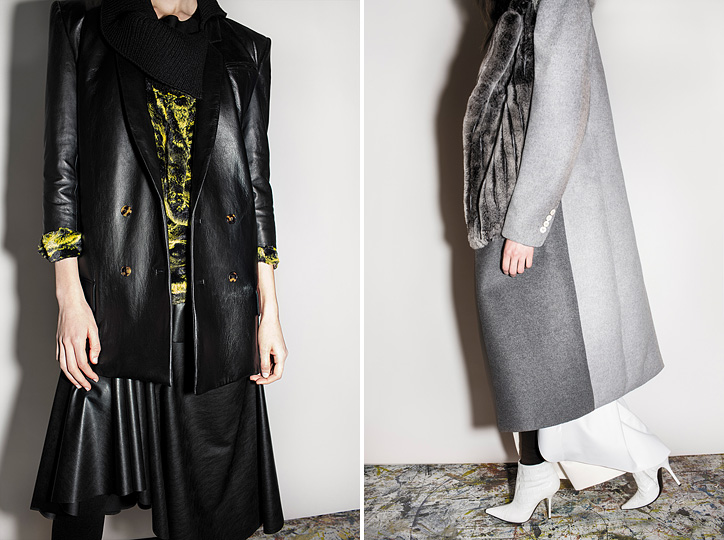