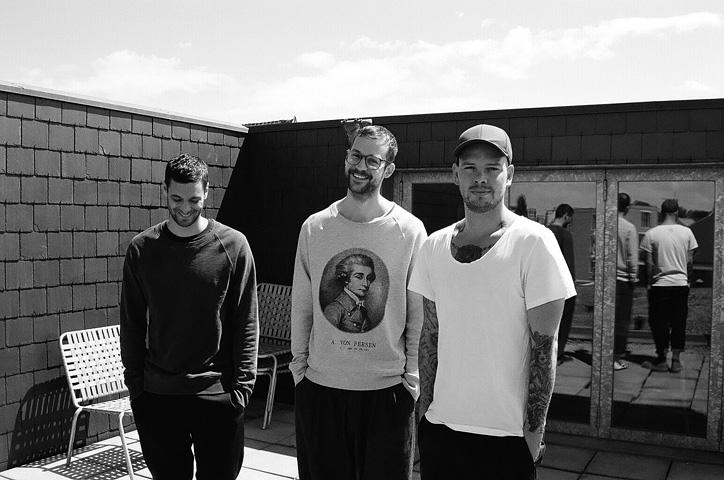 In August last year, three former students of the prestigious fashion department of the Antwerp Royal Academy of Fine Arts in Belgium started their own unique shoe brand called WeberHodelFeder. The three designers and entrepreneurs Matthias Weber, Niklaus Hodel and Florian Feder of German and Swiss descent started their fashion design course after years of working in various fields, some more related to fashion than others. The choice to start their own label came quite naturally, and their down to earth and subtle approach is nothing short of a success. Even before their first anniversary, they have announced sales points in Tokyo, New York, LA and London, following their success in and far beyond Antwerp.

On a sunny day in June – the weekend the Academy held its annual graduation fashion show, a four-hour spectacle of exploding creativity – I met up with Weber, Hodel and Feder in their beautiful office and showroom in the Jewish district of Antwerp and had a little chat about their journey.

Starting the intense fashion design course in their mid to late twenties – now about five years ago – the trio already had some very different professional experiences behind them. Matthias Weber grew up in Munich, and after he had had to end his budding football career due to an injury, he first came in touch with fashion when he was helping out a stylist friend and eventually started taking over jobs from her. A couple of years later, he had completed a technical fashion course in Stuttgart and was helping out backstage at fashion shows in Paris for Belgian designers such as Raf Simons and Dries Van Noten. It soon became clear that he wanted to study at the elite Antwerp academy and pursue his own fashion career as a designer.

Matthias had met Florian Feder in Munich, where the trained accountant worked as a store manager and buyer for a respected boutique. Soon, the garments themselves became more appealing to Florian than adding up numbers and after meeting Weber, he decided to try his luck in Antwerp as well. The third member of this flourishing collective, Swiss Niklaus Hodel, on the other hand, was already quite successful as an award-winning graphic designer, working in advertising in Bern and Zurich. After about seven years in the business, he realized that the feeling of crafting something by hand, the creativity and freedom of making something completely your own persisted. He knew he had an interest in fashion but no real connection to it at all, so he literally googled for fashion schools in Europe. Antwerp stood out to him because of its focus on creativity as opposed to more technical approaches to fashion.

All this considered, it becomes quite obvious why the three work together so well. They cover a lot of ground with their combined expertise, which made the leap to creating and maintaining a brand of their own a little bit easier. In addition to that (and aside from what I can only assume are amazing networking skills) each of them proved to be quite promising throughout the three years of their course. The media had them covered and the support of Geert Bruloot, one of the promotors of the Antwerp Six in the late eighties and the founder of the internationally acclaimed Coccodrillo shoe boutique, certainly made a difference. Coccodrillo, called "Best shoe store in the world" by the New York Times among other appraisals, is the first exclusive boutique to offer the limited (and hand-numbered!) men's shoe collection of WeberHodelFeder, where the boots and low models stand proudly next to Balenciaga and Yves Saint Laurent shoes.

Niklaus Hodel had won the Coccodrillo award in his second year of school for his futuristic metal women's boots. When he showed his first menswear collection in the third bachelor year, Coccodrillo was very impressed with the beautiful handcrafted men's shoes once again and offered selling them. Since the three were already thinking about starting up a brand together, the decision to found a company and actually produce the shoes was quickly made.

Niklaus Hodel says about the Coccodrillo collaboration: “Ever since I met Geert Bruloot during my school time, we got along very well and stayed in touch. When the opportunity to sell our shoes arose, everything happened very quickly. We had their support at a very early stage, they believed in an idea that was not even on paper at that point. We explained the first concept of us three working together to Geert and he must've felt that there was something there. Of course, since we are German and Swiss, we want to do things right! So we immediately founded a company with a tax number and everything. Then everything started rolling and the first response was very good. That of course motivated us and helped us to keep believing in it. In the beginning it's something you try out, hoping for the best, but to have such great response from a real audience and actual clients, outside of the school, is worth so much.”

Matthias Weber, who graduated one year before Florian and Niklaus, remembers: “The first time we seriously talked about it was when the other two graduated. We were talking about it for a while before, even specifically about shoes, after we'd gotten some good feedback on our school collections. Then, in a fairly short time, we got really serious, made a lot of decisions and within a few weeks we set up the whole thing.”

Hodel: “We actually met when Matthias asked me to do a fitting for his collection and we hit it off. When you're in school, everything is so intense that you need your safe haven to somehow escape once in a while. With these guys I immediately felt that we could be close friends: we grew up not too far away from each other, of course in European sense Bern and Munich are not so close but when you look at the range of nationalities at school, we felt like neighbors. We have the same cultural background, watched the same stupid tv-shows when we were young. You know, all those little things that connect you.”

Weber: “And we finally found someone to watch football with in this school!”

Hodel: “Of course those little things are really important! At first, you joke around: 'We should do something together later'. It was never my goal to start a company or anything; when I came to Belgium I always thought I'd work for a designer later and I'd see what would happen. With these guys it somehow felt right. Our professional backgrounds are so different but attending the same creative school here, we somehow spoke the same language. Plus it's so rare that the three of us can cover so much work by ourselves, from the design process over production all the way to branding and marketing.”

Of course Antwerp, much like the rest of Belgium, is a hotbed for innovative design, in all kinds of fields and especially fashion, as can be seen in the rise of many great designers from Belgium. There might've been more obvious places to start a company but the three stay true to the beautiful city of Rubens.

Feder: “It's a good starting ground for us. It's not Paris or London, it's still affordable but I think it has everything we need to grow with what we do.”

Weber: “After these years at the academy, it became a part of us. It feels weird to say that we're a German or a Swiss fashion brand because we have lived this Antwerp identity for so many years, so it just makes sense.”

Feder: “It's a huge part of the design identity, we basically learned to design here and we're influenced by the city we live in, which is also reflected in our designs.”

Hodel: “But it was also important for us to branch out and reach out to people in bigger cities around the world relatively fast. Of course, Coccodrillo is still the best shoe store out there to me, but we don't want to be 'the guys from Antwerp who only sell in Antwerp'. We'll be selling our Autumn/Winter collection in LA, New York, Tokyo and London, which is all we could wish for. Now we're showing our new Spring/Summer collection with a bunch of new designs in a showroom in Paris and so far it's looking... promising, let's say.”

The WeberHodelFeder shoes are produced in small family-business in northern Italy, where a lot is still made by hand. The guys were already in touch with the company when they were producing shoes for their school collections so this is a perfect follow-up.

Weber: “We knew we would get absolutely impeccable quality there, which is the main thing we stand for. Because we were in touch with them already, we were able to go there, discuss everything and start right away.”

Hodel: “Our designs really reflect who we were during school already. We are all a bit more quiet, we observe and we prefer subtle and smart design and a focus on craftsmanship, Often, our design starts with a very simple thing, something we all like but we're not sure yet why. So we start investigating and twist it with these little ideas which...

Weber: “ Which makes it something precious.”

Hodel: “Exactly, and which also makes it specifically ours. There are these little ideas that feel like they were always there and they feel effortless. This design was literally based on a brogue, one of the oldest shoe styles out there. The velcro's are just a cute little thing, coming from kids shoes or sport shoes, there's a little humor in there. We don't want to be a serious luxury brand. Of course our prices are not low but the whole price goes into the quality. In that sense, maybe our shoes are for someone who already has some designer shoes and wants something different, a fun alternative to a classic gentlemen's shoe.” 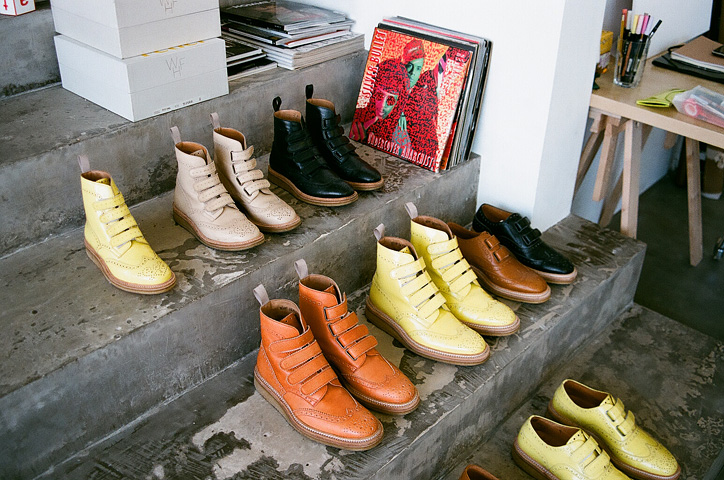 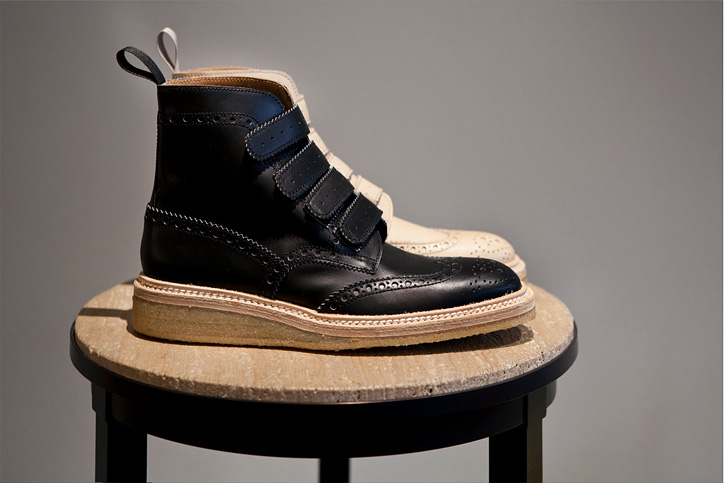 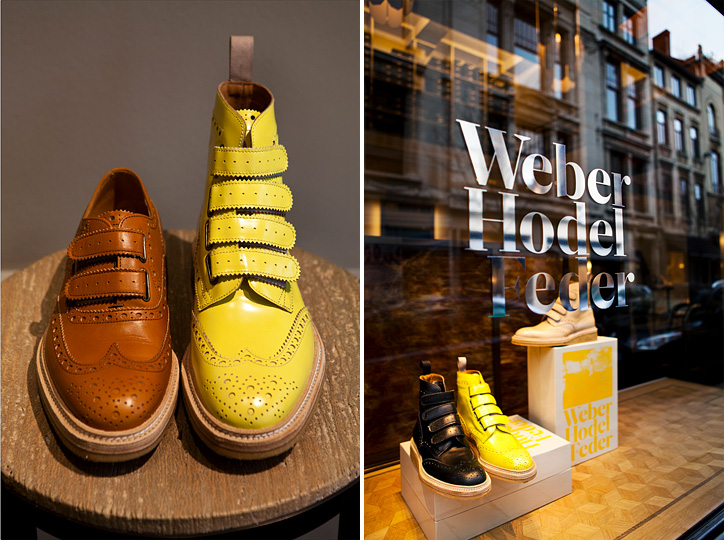 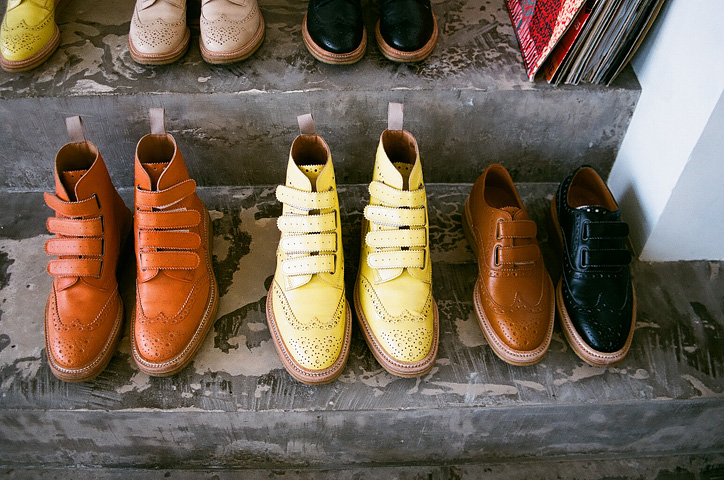 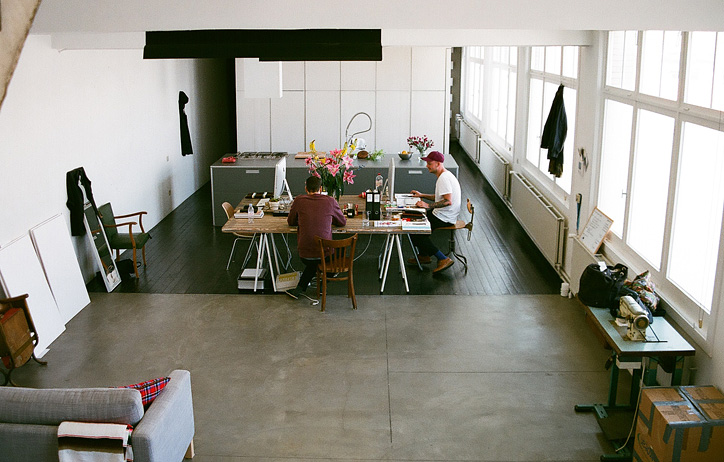 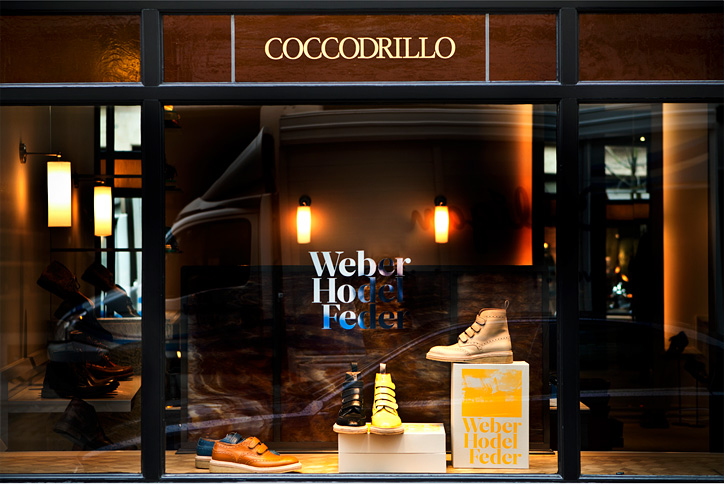