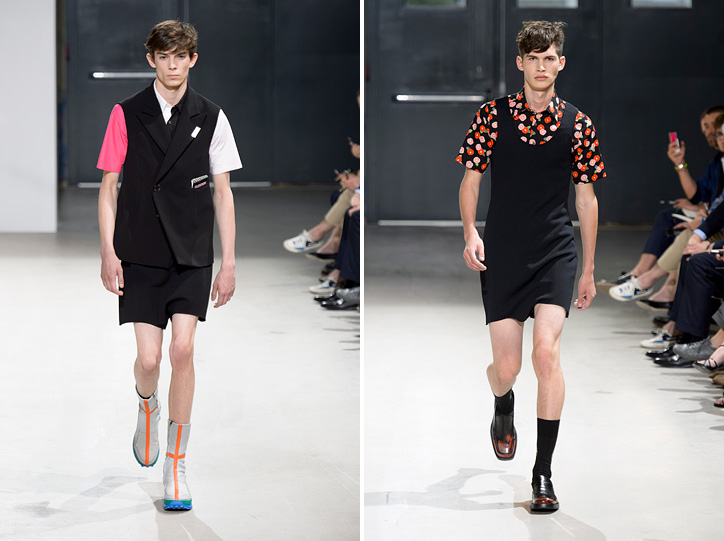 Paris Menswear Fashion Week is the final destination of every fashion season showcase, the last word in the fashion bible, the ultimate trendsetter for the following season. In this first part, METAL Magazine explores the highlights of next Spring/Summer season.

At Valentino, Pierpaolo Piccioli and Maria Grazia Chiuri pay tribute to the military uniform with a contemporary twist. Camo-prints on sweaters, military khakis in parkas or camel tailored cotton suits formed by chino trousers and blazers, assured the Valentino man fights but keeping it always classy. The experimentation with sharp tailoring in denim suits or with fabrics such as barathea make work-wear look as eternally elegant. Their suggestion for the evening time was a combination of midnight blues on satin tuxedos.

Evening time is lush, and if someone knows about this is the Haider Ackermann's homme fatale. Reminiscences of pyjama-like or post-modern dandy in silk and jacquards composed by a colour palette in vibrant blue, golden yellow, lavender and pure red were the key of a sublime collection, which his devotees have been awaiting to see for three years. The designer himself hand-wrote the invitations for the selected audience.

The set-up on Dior's show was a labyrinth-installation made of mirrors, a complicated structure which was reflected on the clothes with Mondrianesque graphics. It all represented the functionality that creative designer Kris Van Assche brings to the fashion house. Burgundy and Prussian blue are the leading colours for next season. Sets of black on leather outerwear and accessories were very present too. Pet Shop Boys soundtrack were in charge of giving rhythm to a collection where modernism and power had a highly significant role.

Under the creative eye of Lucas Ossendrijver and Albert Elbaz, Lanvin offered a succession of color-block looks although not as simple as it sounds. The initial monochrome in black, white and grey on leather trenches, mini shorts and fitted-shirts in black a white, gave its way to deeper colours such as purple-blue, soft pink or corals. Unstructured sleeves and nylon tops together with loose trousers were the sporty side of the collection.

At Dries Van Noten's show a golden foil backdrop occupied the wall of the giant warehouse, clear clue for what was about to come. The golden foil could be seen as the flower’s stigma in bloom. Every outfit had a flower print on it, reflecting a soft yet strong mood. Fitted coats fastened with embroidered straps, transparent shirts and embroidered flower stitches on trousers. Silks and cottons fudged in a complete collection dominated by an obscure palette mostly in black, burgundy and gold. The presence of the number nine added a bit of a sporty feel into a gothic-romantic collection.

Raf Simons presented his Spring/Summer 2014 show at the Gagosian Gallery. The collection acquired a unisex vibe, with the use of vibrant colours, pop prints and graphics in loose tunic-dresses, mini shorts and dungarees. The designer has become the most acclaimed designer since he took the reins at Dior womenswear creative direction, but once again, Raf Simons proofed he can still be himself.

Kris Van Assche is the master of tailoring versus street wear done in a minimal way. Colour block in black, white and deep pine green evolved into navy-blues and burnt oranges. Polo-shirts, zip-jumpers, tailored blazers and matching shorts. The only graphic allowed (which was anticipated in the show’s invitation) were perforated dots on jumpers, and black and white dots on tailored double-breasted blazers and shorts. Call it casual, call it tailored, call it minimal. Call it KrisVanAssche‘s signature.

Guillaume Henry, creative director of Carven, wondered what Pablo Picasso would wear in Spring/Summer 2014. A collection mostly done in a shade of greens, blues and terracotta. Textured suits, plenty of bombers in soft leather and shorts showing an overall 50's vibe.

Hermès also went for blue and grey as preferred colours, but allowing space to mint, concrete and burnt Sienna too. For next summer season, Véronique Nichanian who has been in the house for more than two decades, found inspiration in the Mediterranean man and his charm, “a bohemian soul”, as the press note said. Hermès showed the usual air of distinction its garments have, not only for the elegance and class that they projected, but also for the hand-crafted accessories and bespoke tailoring.

Another master in craftsmanship is, of course, Louis Vuitton. Designer Kim Jones, has the tendency of seeking inspiration in travelling for his creations. For next Spring/Summer season, he fixed his eyes on a road trip in America followed by a very 70's vibe. The bandana will definetly make a come back next season, not only as an accessory but also in garments. The LV logo in carpet fabric was present at the back of a cognac soft-leather jacket. Parkas, straight fitted trousers and blue tartan suits were staples for the day. As for the evening-wear, the classic tuxedo made a strong appearance. One of many highlights of the show, was a real tuxedo with the brand’s logo embroidered in mother of pearl.

Hedi Slimane is working hard in re-branding Saint Laurent and the results are appearing to be very positive up to now. His latest Spring/Summer 2014 collection once again offered an L.A attitude in which the models delievered the L.A mood, mainly Rock'n'roll, cars and sex. The Saint Laurent boy might be a badass, however the collection is made for stars: vinyl skinny trousers, bike leather jackets and damier prints; leather waistcoats and extremely-skinny jeans. What Slimane teaches us every collection is to look into the details: lurex golden blazers and crystallised red bomber jackets are just a few examples, proof that he is back for good. 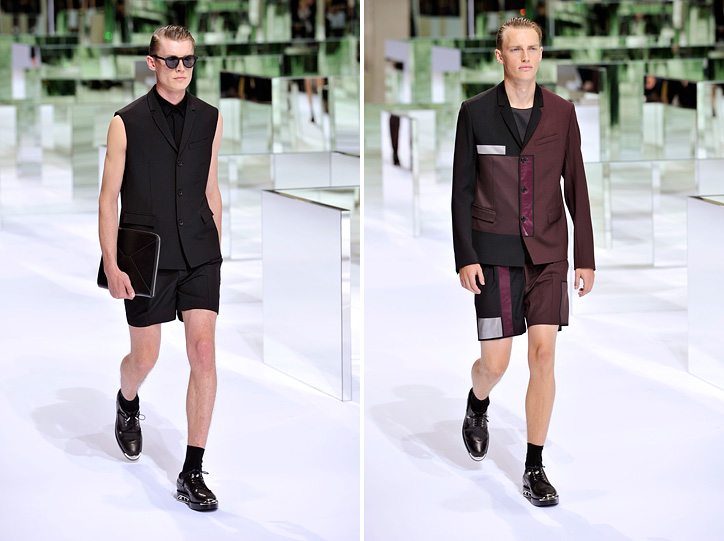 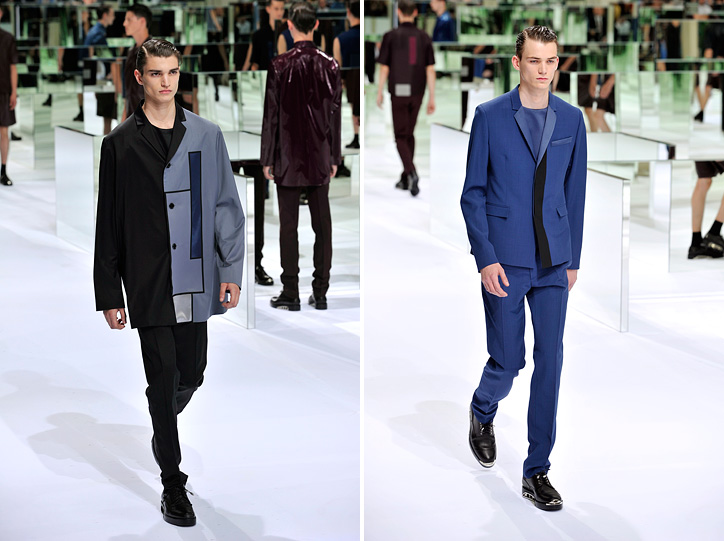 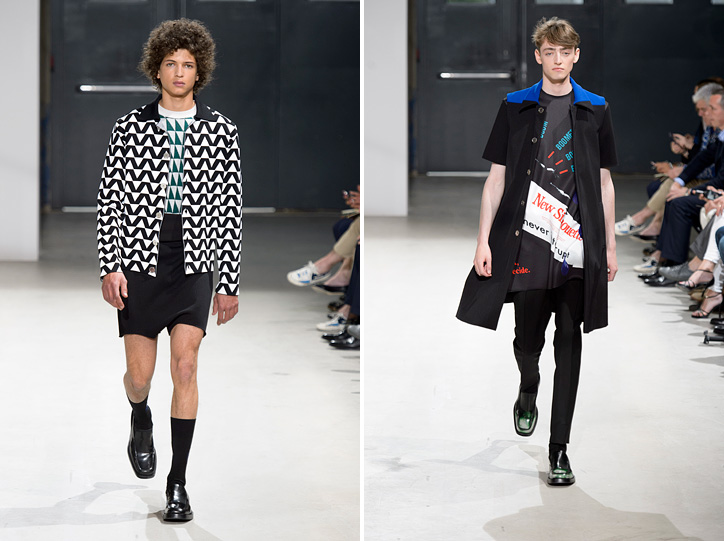 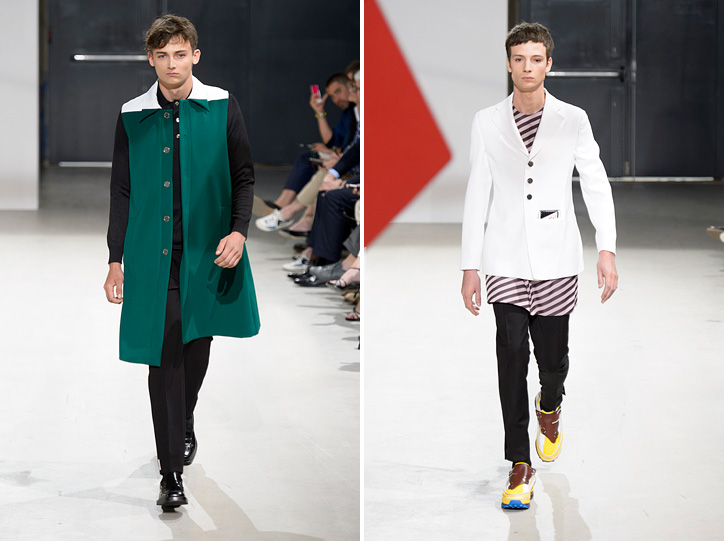 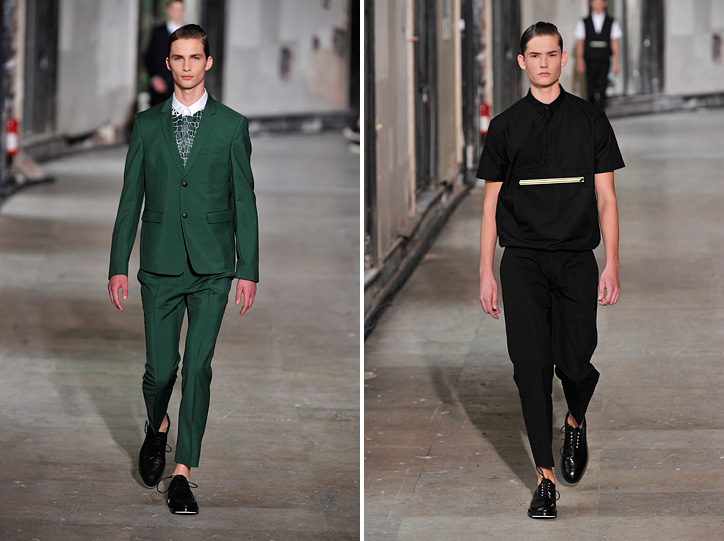 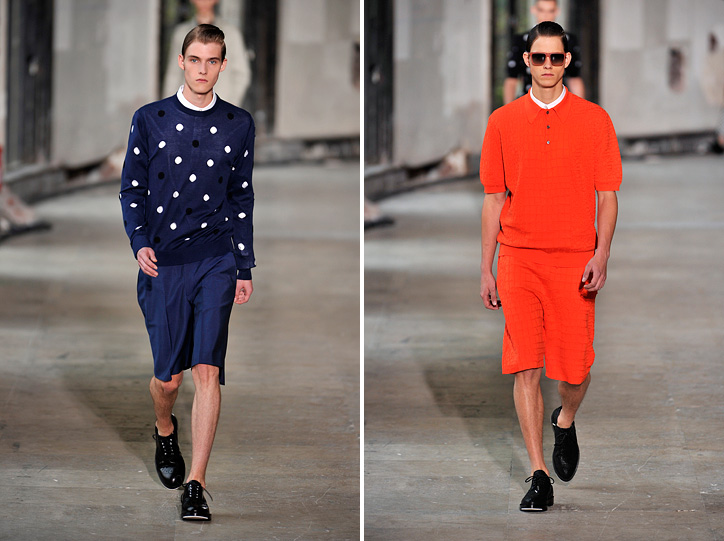 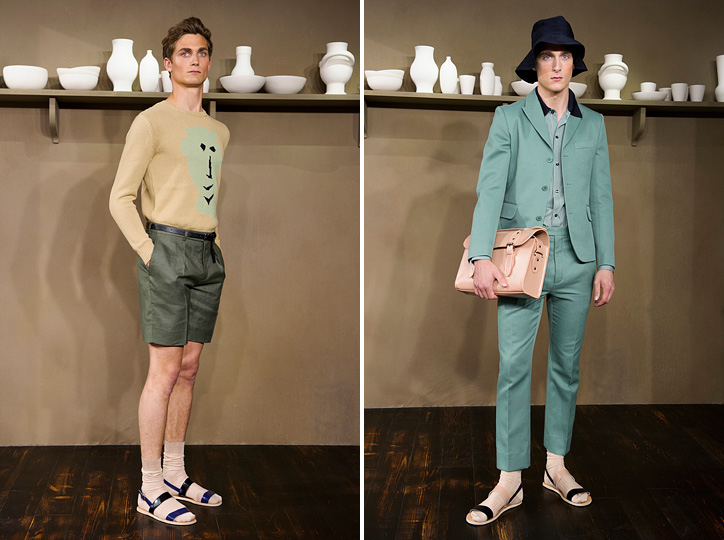 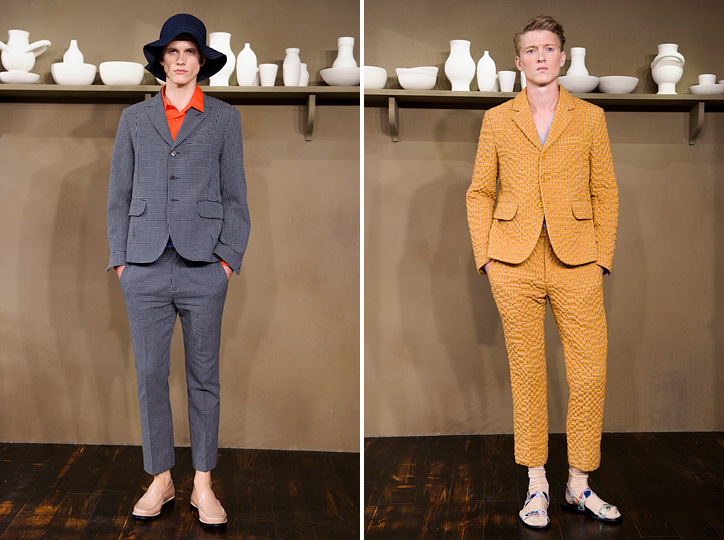 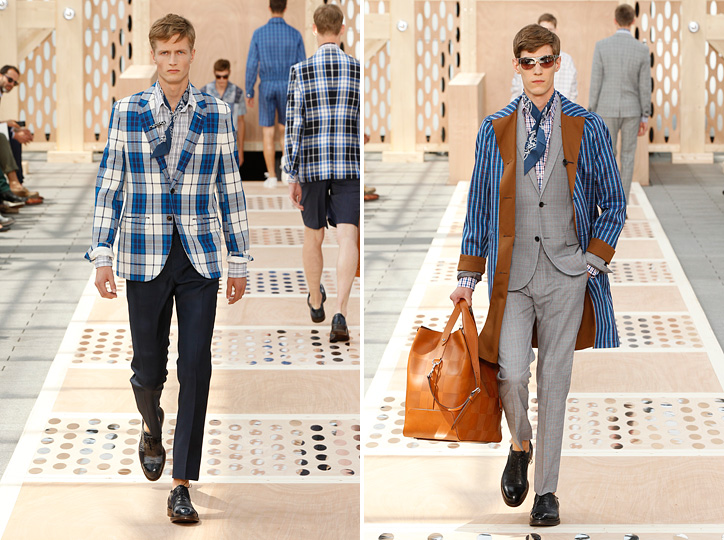 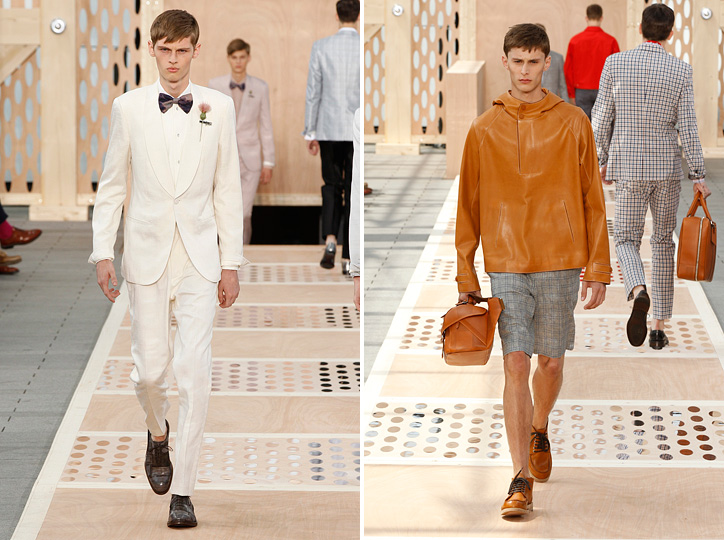 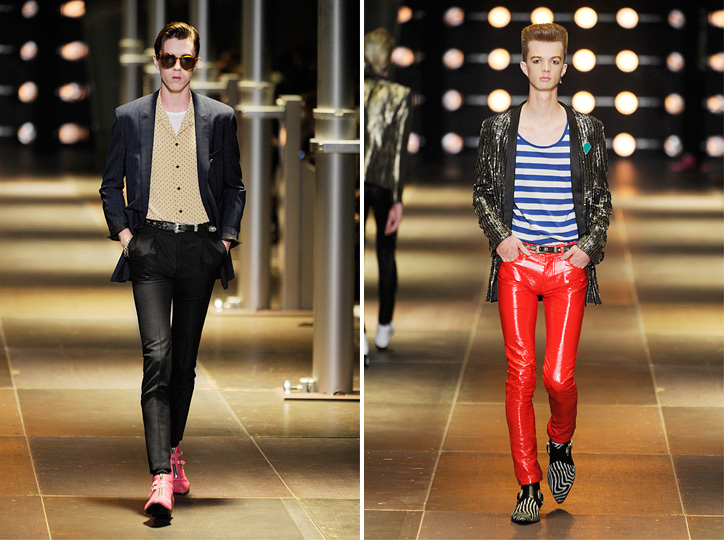 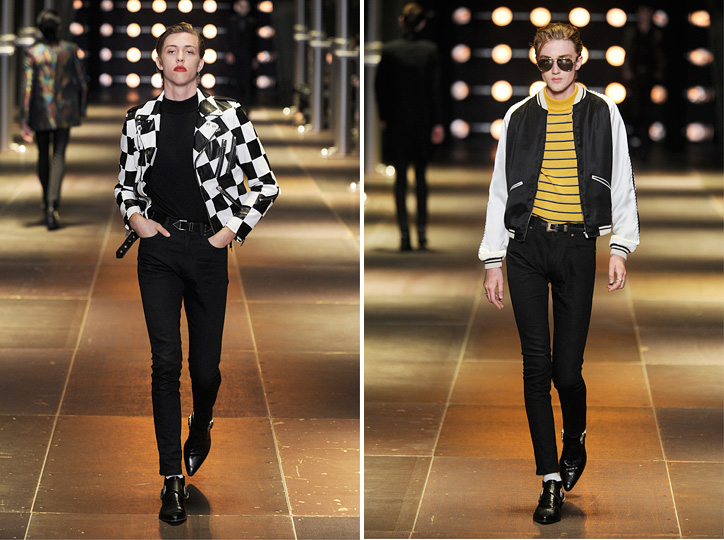