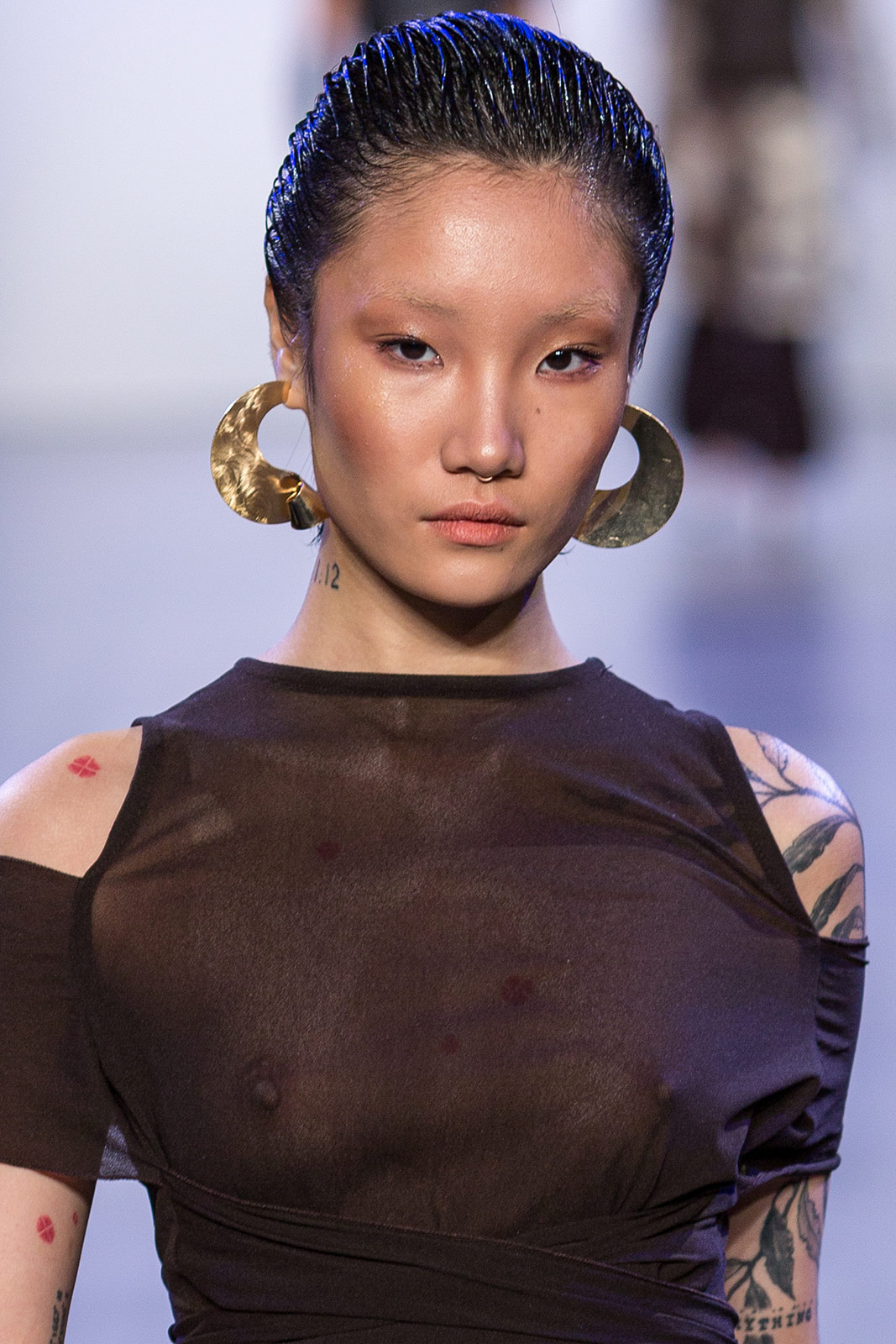 In the packed fashion industry, becoming relevant and making a space of your own has grown increasingly difficult. However, some emerging designers are standing out amongst the crowd. From the Fall/Winter 2020 runway shows, we get to know four up-and-coming designers: Keenkee, Romeo Hunte, Kenneth Nicholson and Kim Shui.
Keenkee
Keenkee, a New-York-based menswear label founded by Kee Kim in 2018, showcased bright colours with custom-developed prints. An MFA graduate of Yale Art School with a background in design consultancy, Kee previously worked as a senior designer at Prada before establishing his brand. Blended gradients were featured in a variety of hues via body-hugging knit turtlenecks, whilst sedimentary pixel and digital decay prints were formed from the decomposition of images originating through Kee’s Yale MFA video work. Notable looks included a graphic treatment shirt with black PVC python pants and a white, aqua, grey and bright red pixel print top with adjustable ankle snap aqua pants. Overall, the filtered elements of streetwear, formalwear and workwear remained evident throughout the collection.
As a sponsor, Reebok’s latest offering of Zig Kinetica sneakers was customised with organza, metal ring links and beaded appliqués. Dr Martens classic derbies in oxblood and black also made an appearance. Although the styling note of mouthpieces created by utilising recycled cellphones seemed at face value an out-of-date concept, they did tie in with Kee’s idea of future nostalgia from his perspective as a teenager facing 2020. Seeing himself as part of the “transitional generation born in the ‘80s”, his inspirations for the collection evolved heavily from his “childhood visions of the future”. 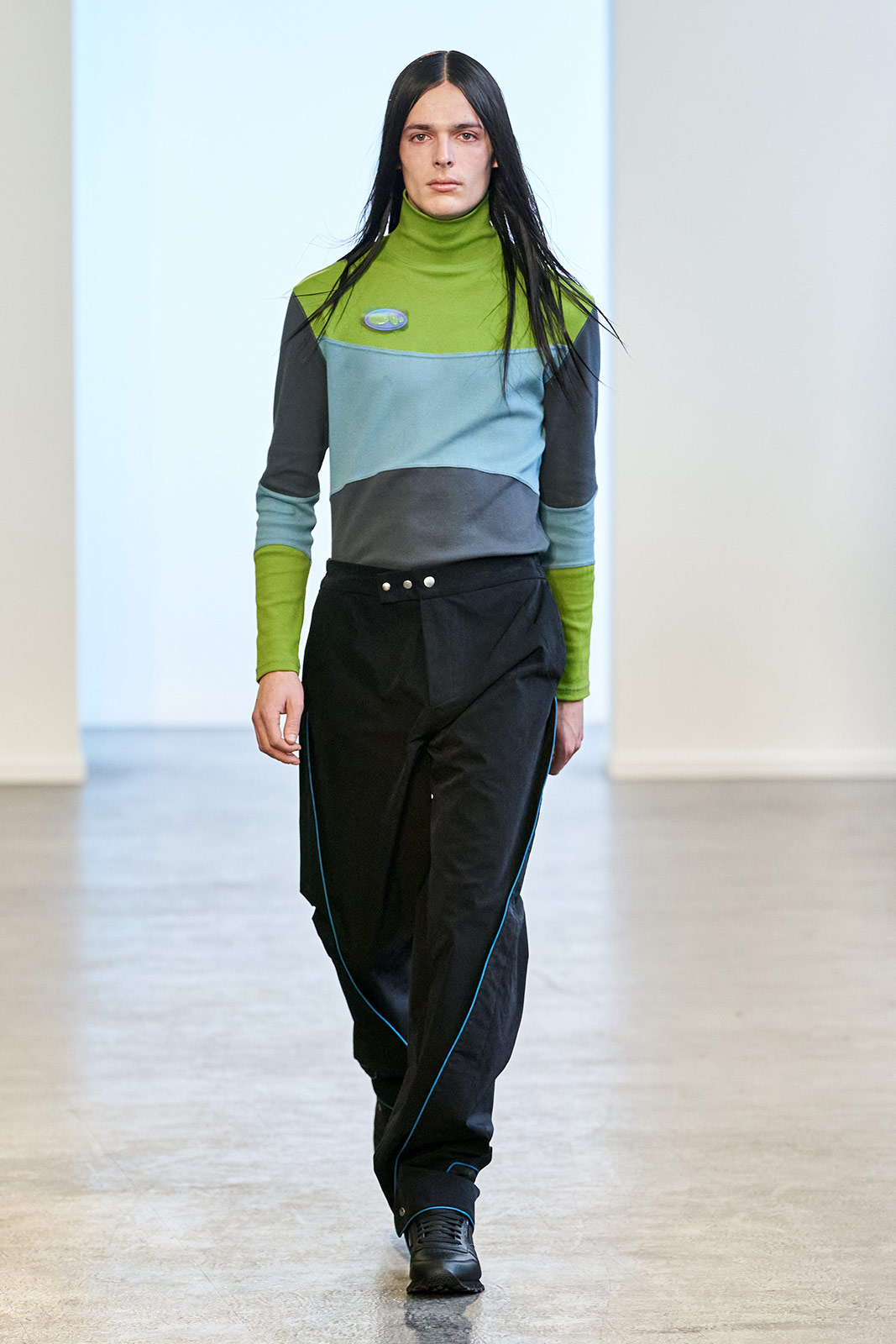 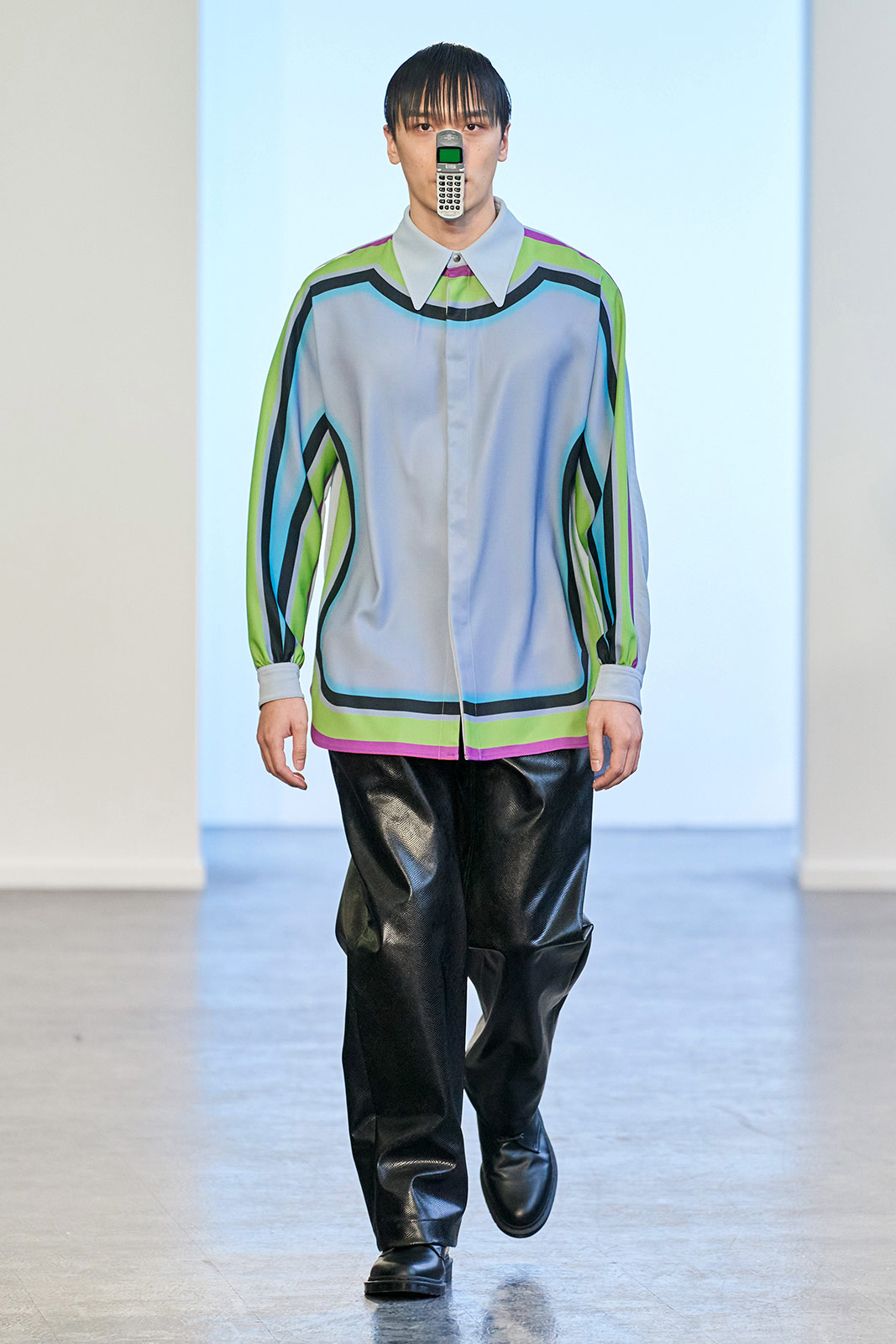 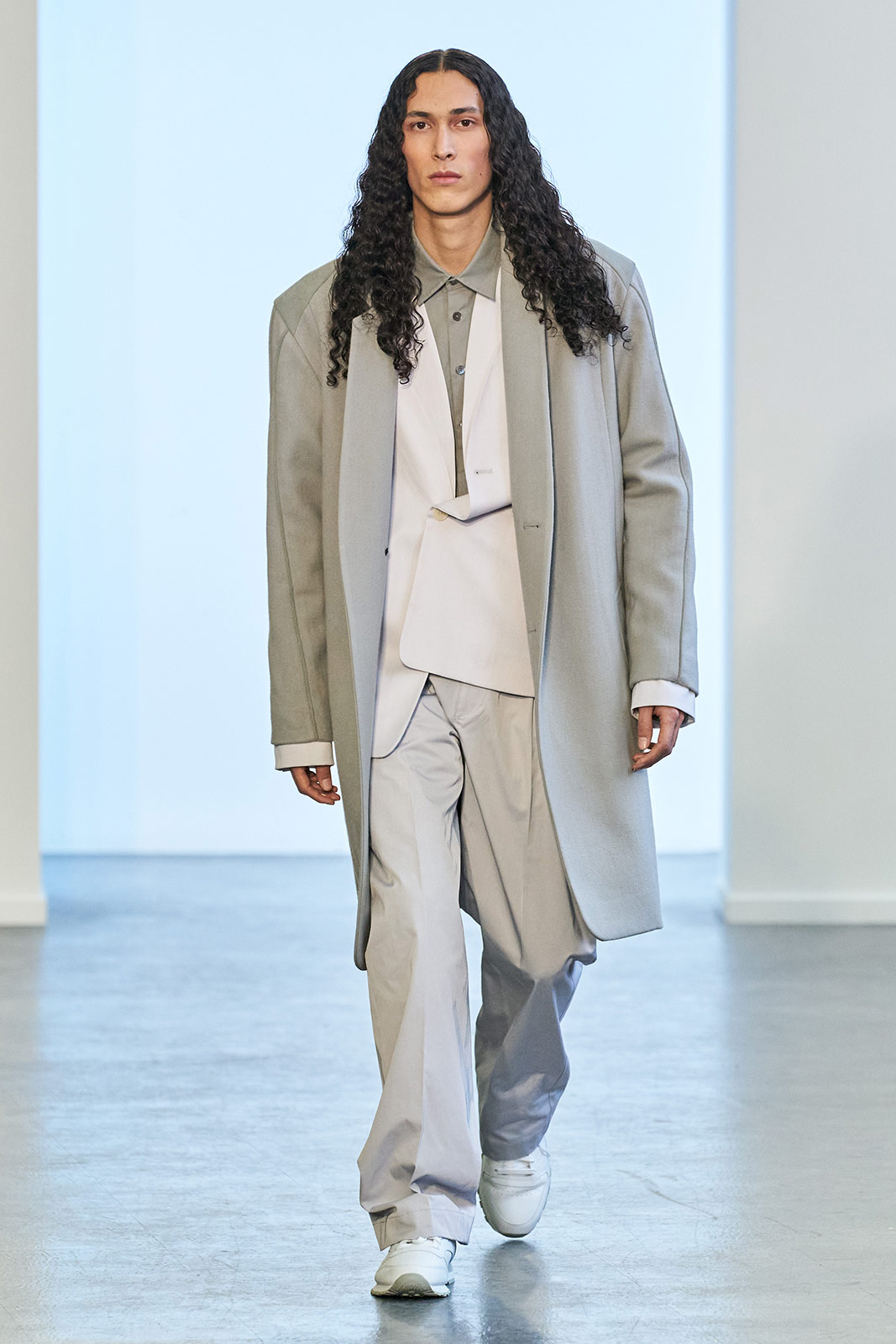 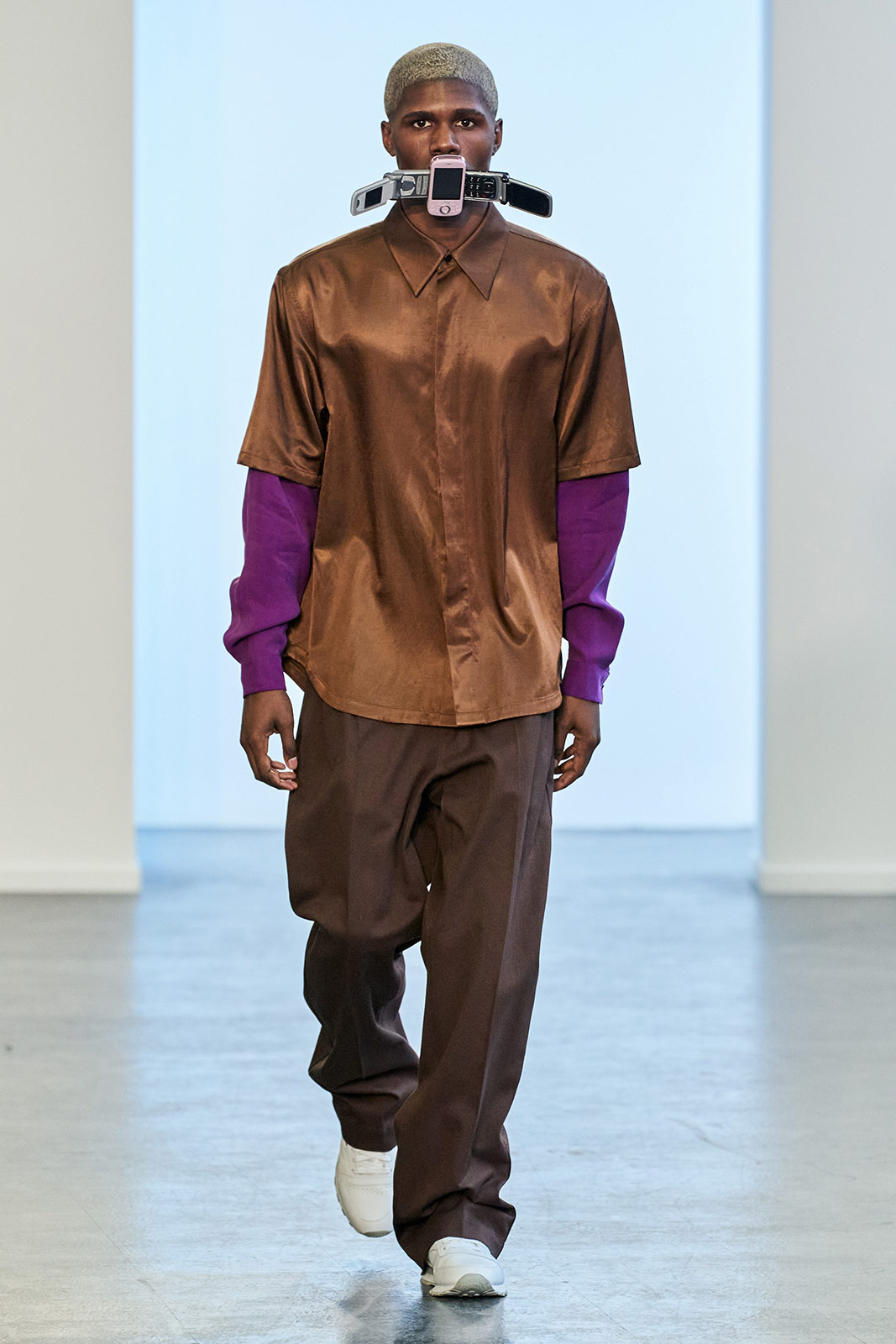 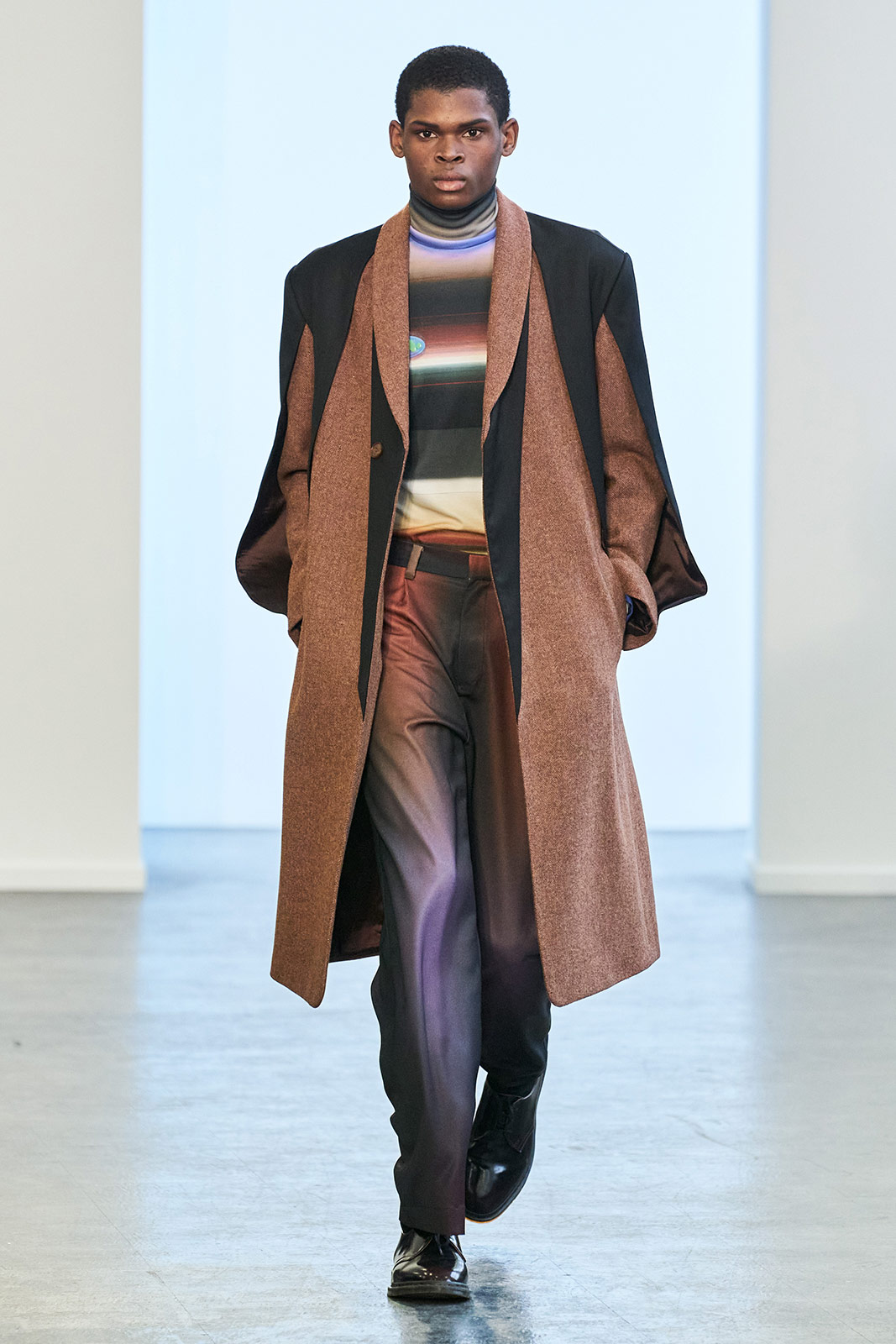 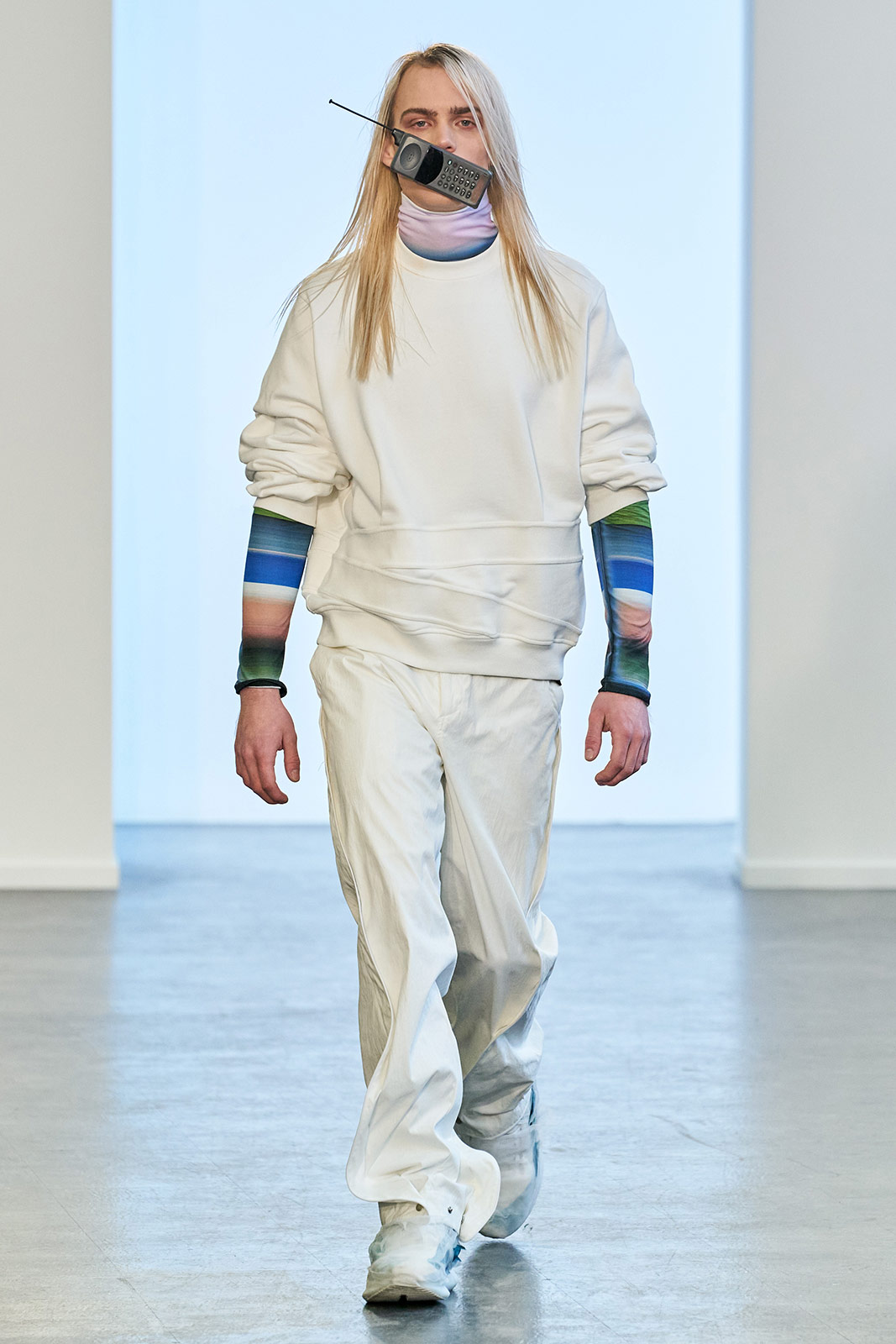 Romeo Hunte
Brooklyn native Romeo Hunte debuted his new Fall/Winter 2020 collection at the illustrious Fashion Institute of Technology’s theatre in midtown Manhattan. A strong community of supporters were out in force as well as local celebrities and press in attendance. The buzz of electric anticipation was in the air, alongside the universal recognition this designer was a man of the people. The show began with a live violin performance from a leather-clad raven-haired temptress, supported by the credible nostalgic track choices of a superstar DJ. The models finessed their pathway with a theatrical presence throughout the show.
Notable looks included a khaki green oversized two-pocket blazer paired with masked hood, styled alongside a matching tone vintage attache case, a glamorous full-length black leather and blue-black fur coat, plus a reconstructed camel cashmere coat with upcycled Tommy Hilfiger denim and leather jacket torso and sleeves. Overall, twelve vintage pieces were donated from Tommy’s archive and upcycled into fresh pieces for the collection. Romeo publicly stated, “Tommy Hilfiger has produced some of the world’s most timeless pieces, that are still relevant up to date. For me, being able to integrate some of those looks with my cut and sew methods, merging the narratives of both brands, means everything. Reconstructing pieces that are already assembled was a contribution to support sustainable fashion.”
Although a sustainable effort is involved via upcycling garments, it is questionable not to continue this throughout the collection. Saga Furs, the Finnish supplier of the brand, markets itself as a responsible and ethical choice however the production of fur is associated with considerable environmental costs. A large proportion of both the fashion industry and the general public are opposed to fur farming, and its fate is a matter of political debate.
As a graduate of the Fashion Institute of Technology, it was a full-circle move to show the latest collection at his former school. Launching the brand in 2014, it developed further from Hunte’s full-time work experience as a personal shopper in luxury retail alongside editorial styling.
Speaking backstage before the show, he disclosed: “Having been born and raised in Brooklyn, I didn’t feel the culture was celebrated that much. There were certain artists that were but not on the runway, so over the seasons, I have built a balance between streetwear and tailored pieces to celebrate the culture. That’s why it’s been interesting to partner with Tommy Hilfiger on great classic staples. Focusing on outerwear and combining those worlds together, everything from your denim jacket mixed with your biker to an overcoat. That’s very modern and that twist on it very cool! A classic designer collaborating with a young designer, right now, that’s so needed in the industry!”
Commenting directly on fashion sustainability, he revealed: “I wanted to celebrate and highlight sustainability by encouraging the notion of ‘appreciate your pieces’. I feel like now, everyone wants to resell after they wear them a few times, whereas I want to show how many ways you can wear them and upcycle other great ones.” Another fashion capital he would like to showcase at is Paris – “Bringing the New York, Brooklyn swag to Paris it would be an impact”, he says. However, he intends to remain consistent in his loyalty for the time being: “Right now, a lot of designers are shying away from New York and I want to remain here and represent.”
Discussing the potential for future collaborations, he indicated, “I would love to do something with Nike and Moncler, anything that’s focused on the everyday lifestyle and changing the narrative of everyday wear. I feel like my touch is always a mixture of two different worlds, so whatever brand I would collaborate with, it would be something amazing. It would be a moment.” A firm celebrity client base of Zendaya and Beyoncé has provided him good exposure in the American marketplace. However, with an increased production budget and further collaborations, it would be interesting to see where Romeo can take things next. 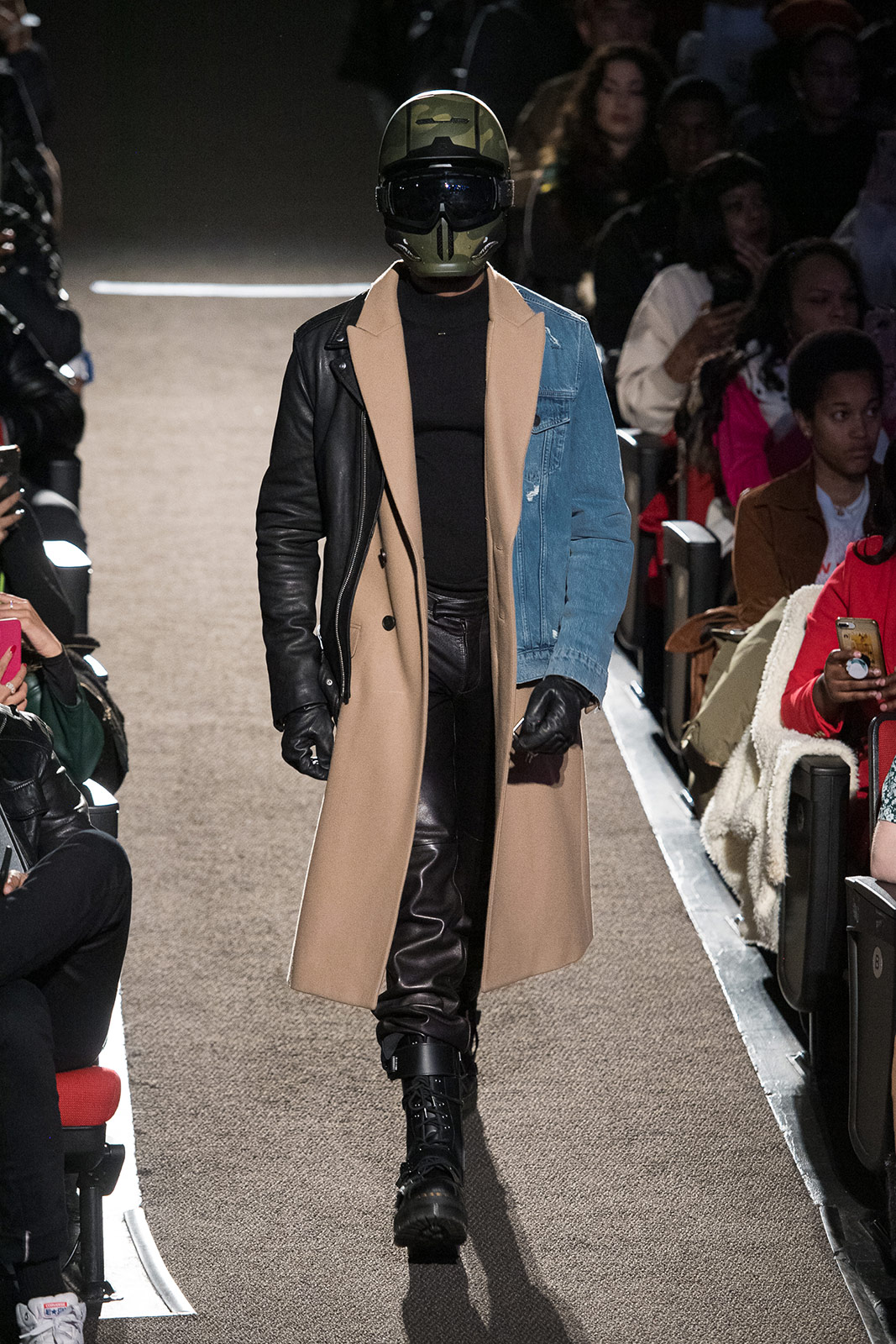 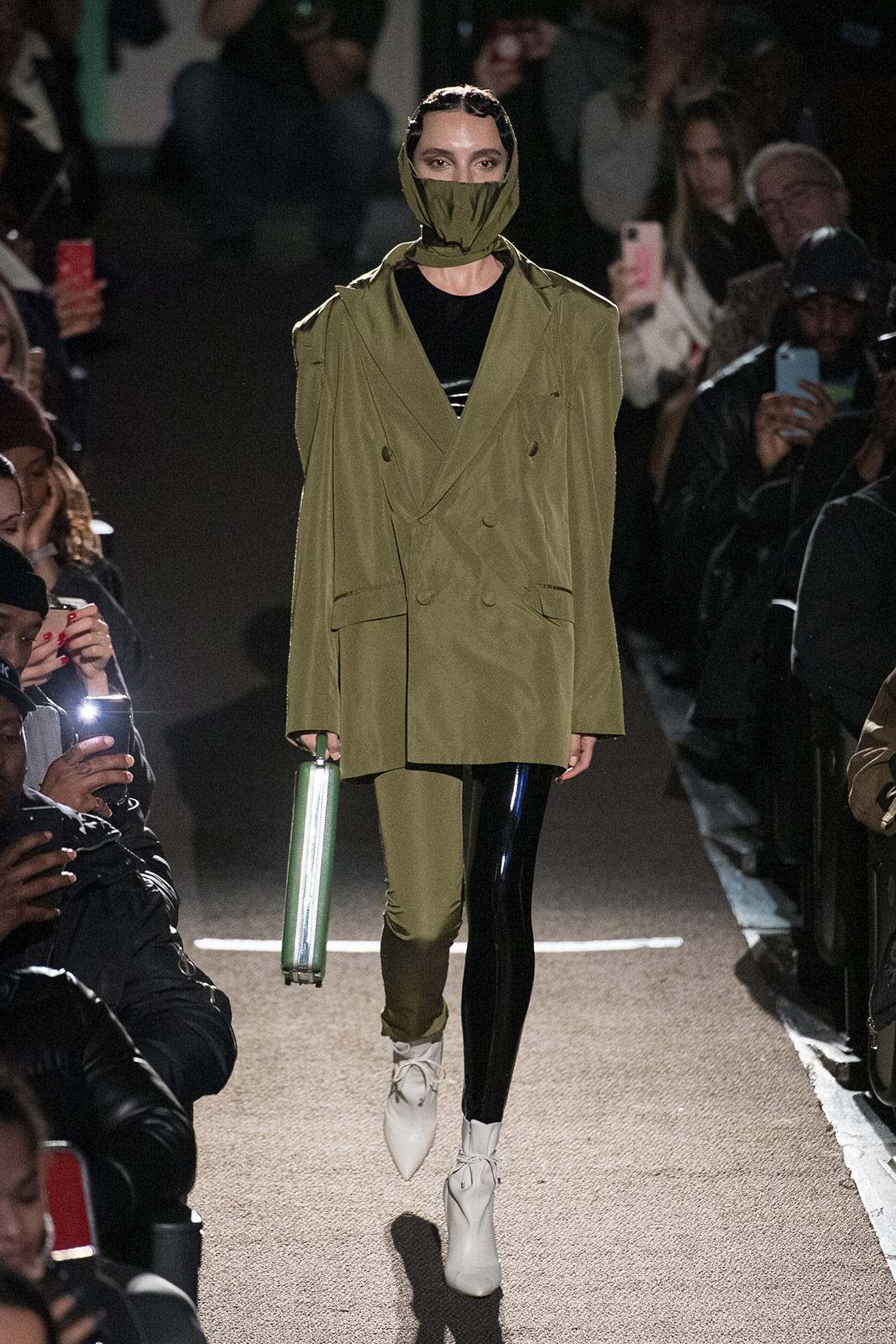 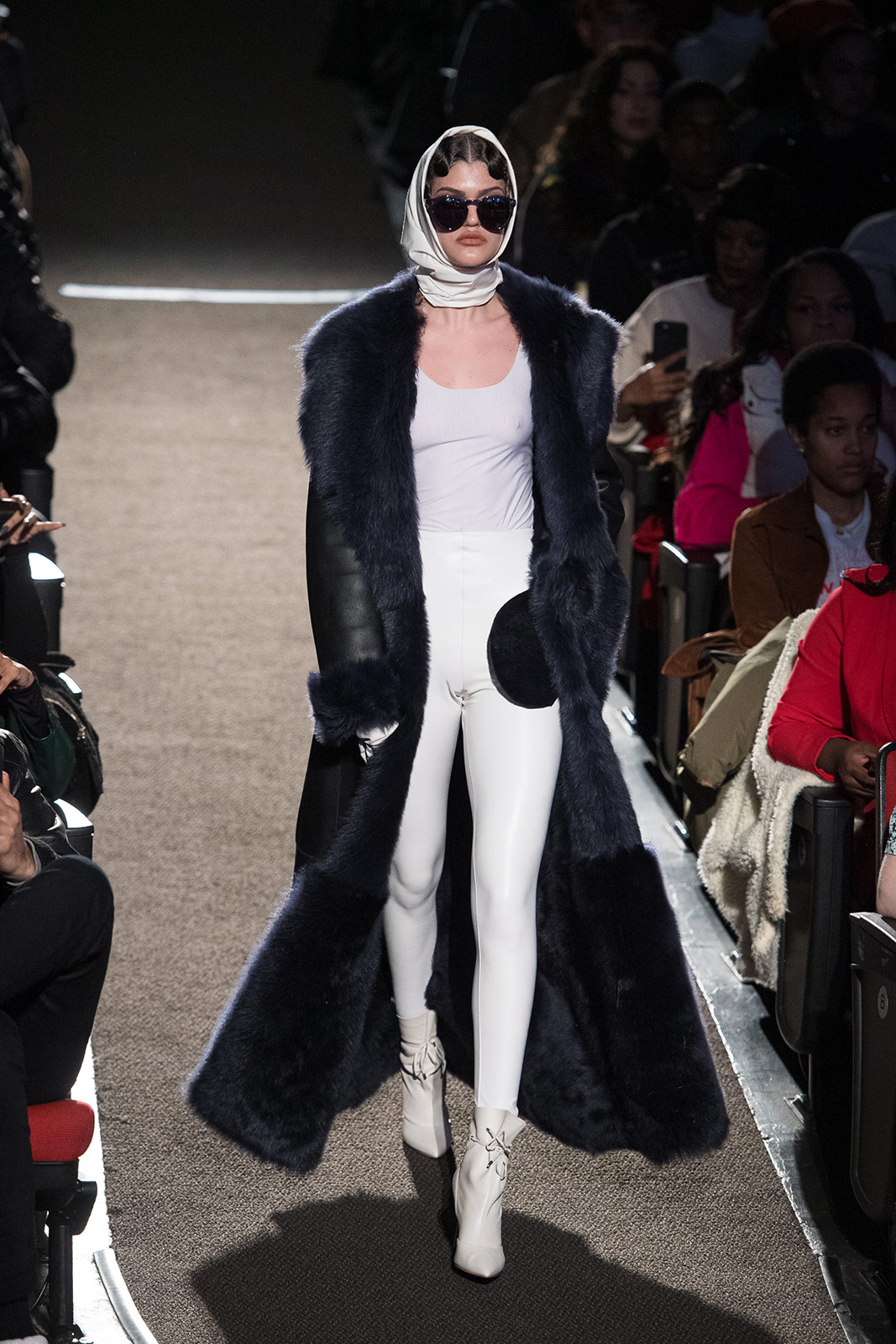 Kenneth Nicholson
Kenneth Nicholson’s latest collection, entitled From Grandma’s Couch, drew from a series of reference points including politics, pop culture and current as well as historical events. The personification of these elements became the view From Grandma’s Couch. Encompassing florals, figurines, sports imagery, sounds of gospel and cultural iconography, they were all fixed together by a communal thread.
Notable looks included pastel tailored suits, organza tops, draped full-length collared shirts and billowing pants with florals, polka dots and checks completing the retro theme. A vibrant colour palette was prevalent throughout, with more subtle muted tones complementing a mood change. Crochet dollies were reinterpreted alongside carpet textiles transforming the ordinary sense of a knit dress. The standout piece, a fluid interpretation of masculinity, was a red velvet zip-up corset dress worn over jeans by a male model.
Before the show, guests were treated to an exclusive display based on Kenneth’s reinterpretation of Reebok’s Zig Kinetica sneaker. This featured nuts and bolts screwed onto the side with a stained blend forefoot as design components. Reebok’s ongoing partnership with the CFDA sponsors emerging talent by providing them with footwear to customise.
Hailing from Houston (Texas), Kenneth is a true southern gentleman in manners and energy. Softly spoken with an infectious positivity, he was able to tell me about his journey so far: “I'm embracing everything right now, all the struggles, all the challenges that arise. It’s when I go through that fire so to speak that I’m refined. Right now, I’m at a point in my career where I’m open. I’m taking it all in.” Touching upon the issue of sustainable practice, he revealed: "I would love to become more organic in my dying process and some of the natural fibre fabrics I could use, such as making sure the cotton is sustainable and well-sourced.”
Regarding his desired direction for future collaborations, Kenneth was clear: "I love Gucci, I think they do amazing, exciting work. Reebok has been great, I would like to continue to collaborate with them. Even more so than that, I’m interested in costume design for the ballet, theatre and movies. I love the idea of creating a world and to push a story forward through the clothing.” Ultimately, New York Fashion Week will always remain a priority for him: “As an American designer, growing up that’s where all the inspiration was, and not only is it an honour but a responsibility to continue doing my part to support the city that inspired me growing up. I would love to show in Paris and Milan, but New York is my home.” 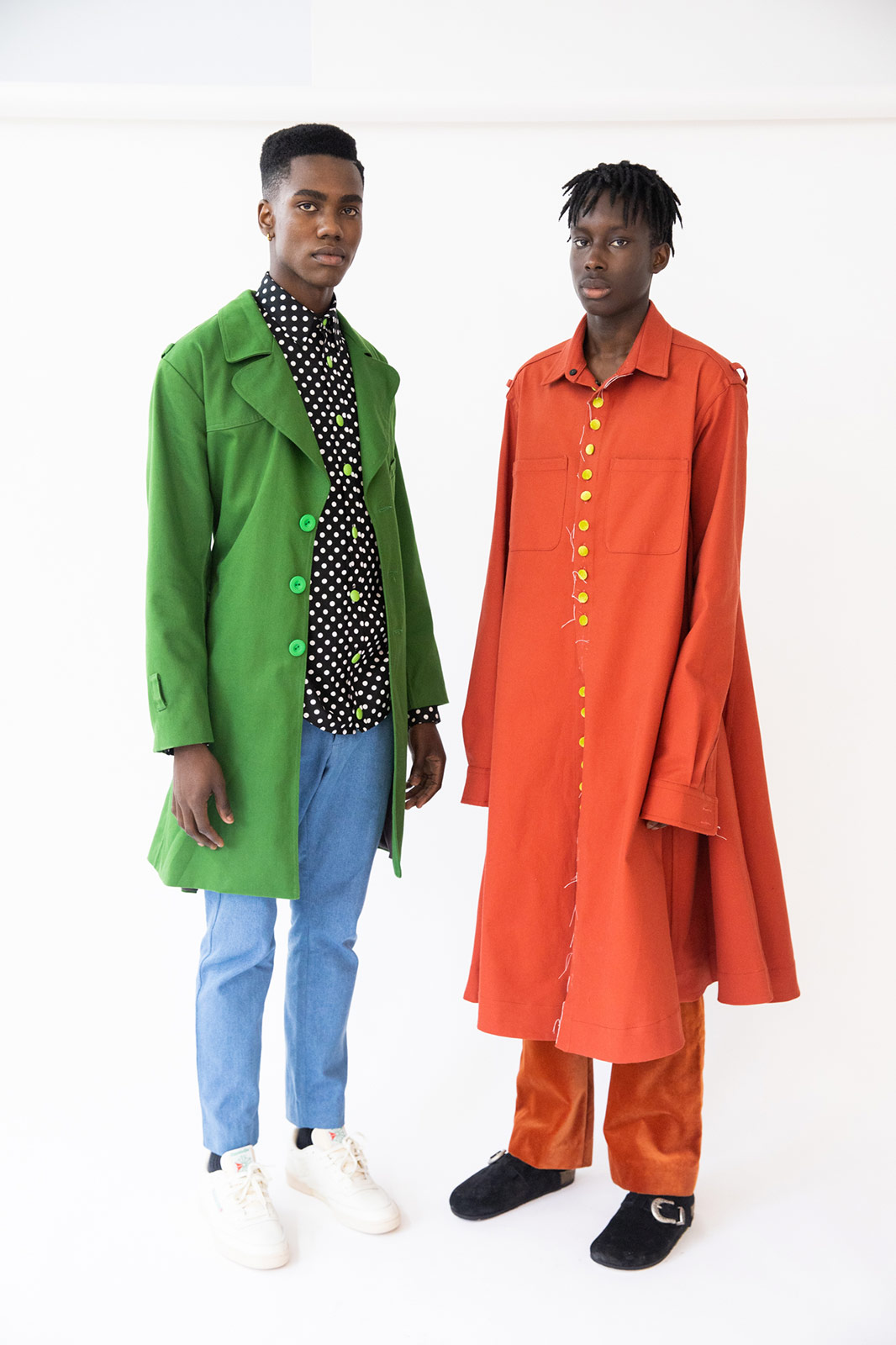 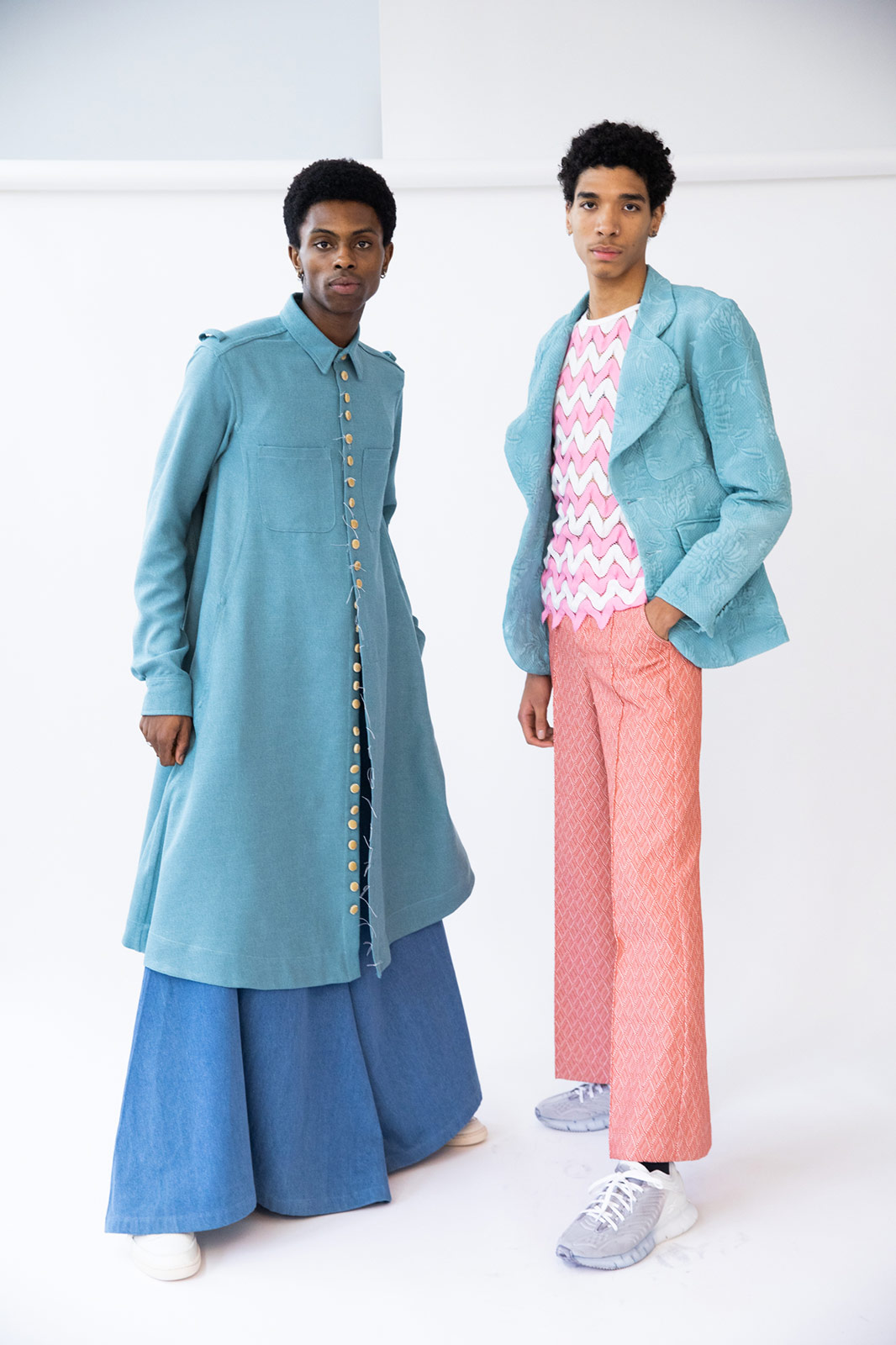 Kim Shui
Kim Shui's show established a party atmosphere by opening to a hot remix from Ddlinkz. A skinhead model with the brand name emblazoned stormed the runway signifying liberation from conservative ideals. Silk trousers, balloon line from mid-thigh met their match with a tailored pinstripe wrap tie blazer. Funky full-length coats alongside cropped belted jackets hit the runway with unquestionable panache. Body con silhouettes worn by slim and plus-size models proved Kim Shui’s universal and inclusive appeal. A standout closing look compromised of olive-green, patent mock croc, bustline corset paired with a bias cut pink-gold maxi skirt. Adidas kicks reworked into stilettos provided a credible accent of upcycling to the mix. Bruce Lee-printed headscarves recommissioned from t-shirts procured in New York’s Chinatown also added elements of upcycling to the collection.
Born in Italy of Chinese descent and relocating to New York, Kim Shui has obtained a cosmopolitan overview of style references. Deadstock materials are heavily used, and Kim oversees production: “Every single piece that came down the runway, I was there with every stitch.” In terms of future shows, she assures New York remains on her agenda: “This is where I want to stay for the next couple of years. The energy in New York is amazing. Why go somewhere else?” 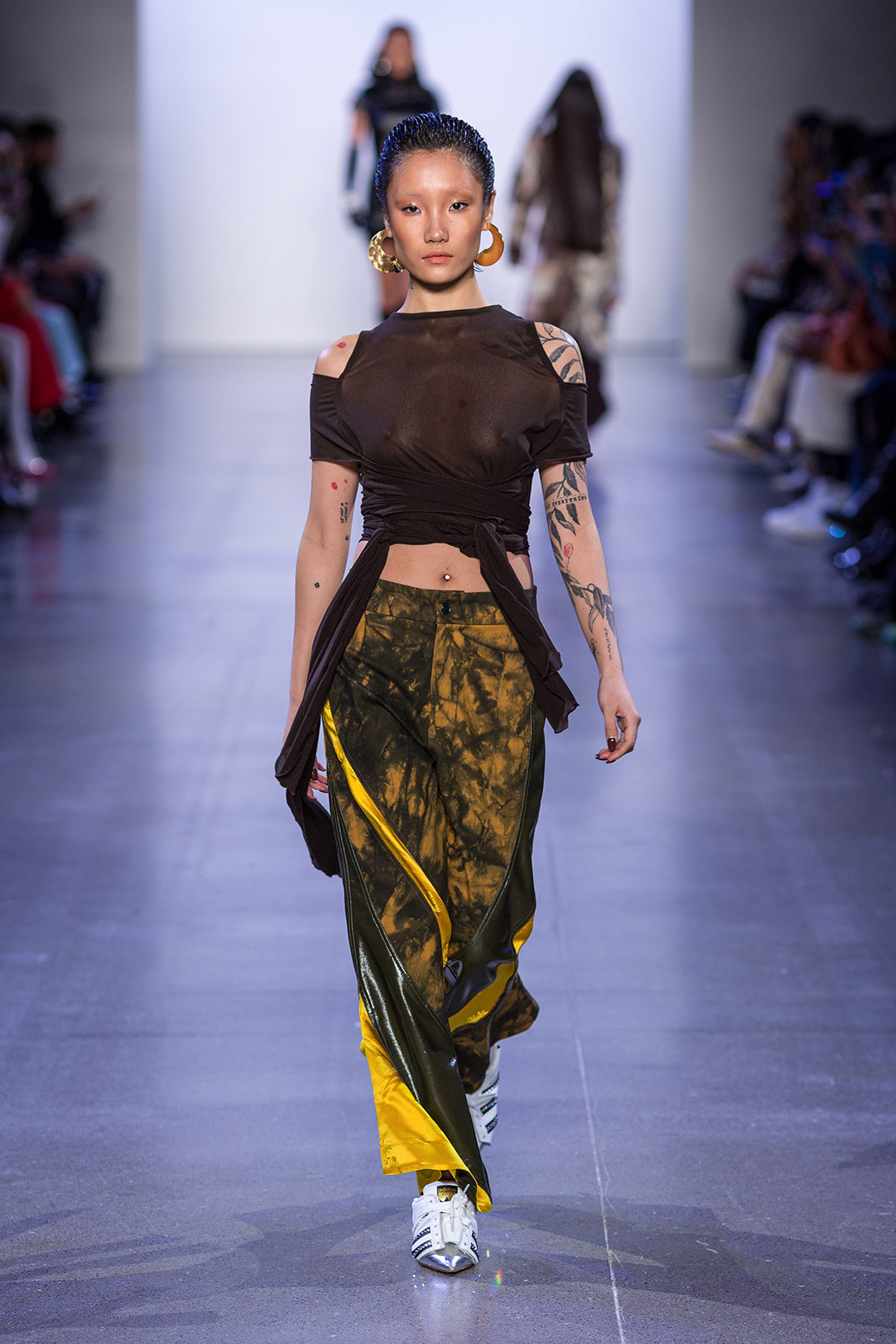 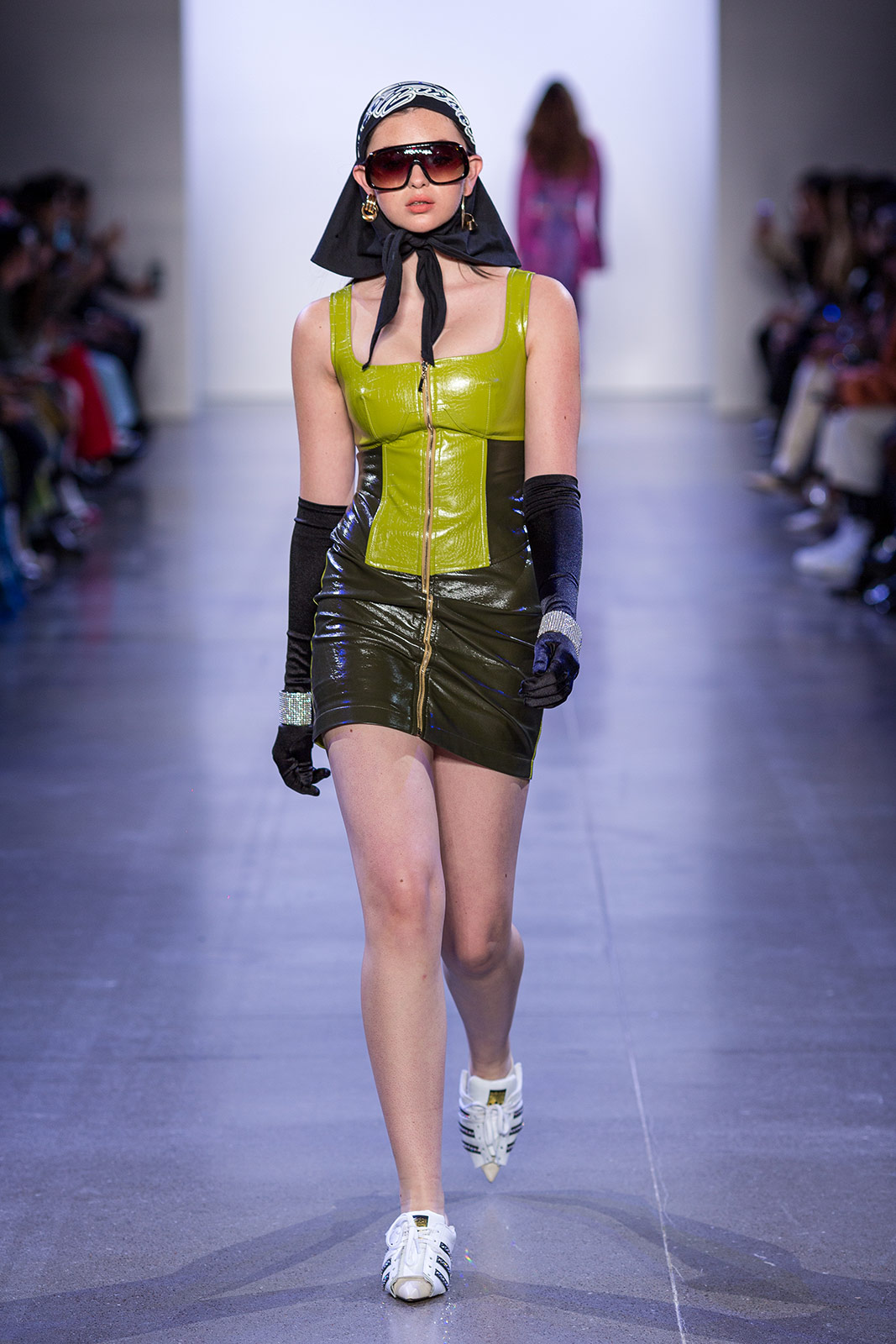 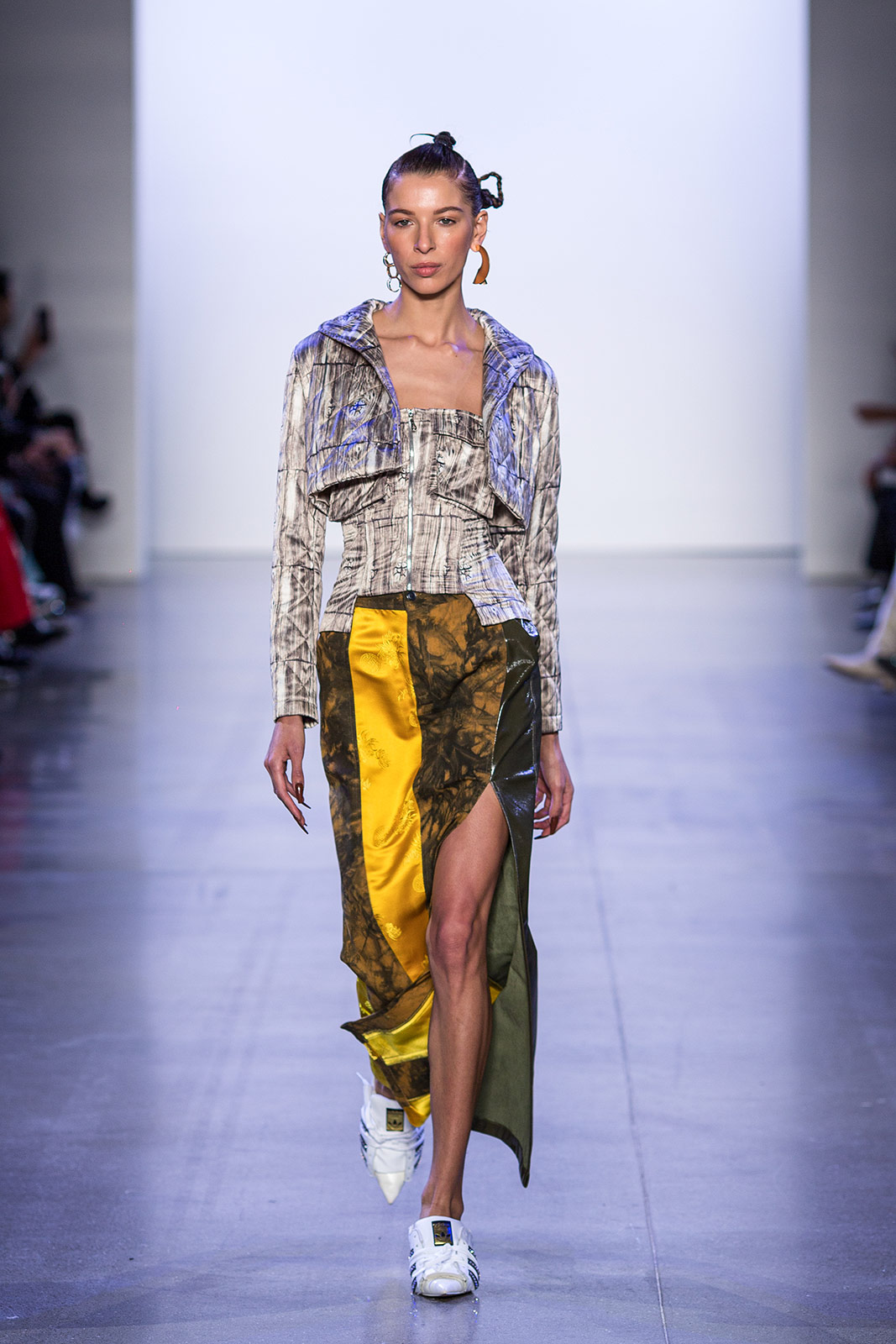 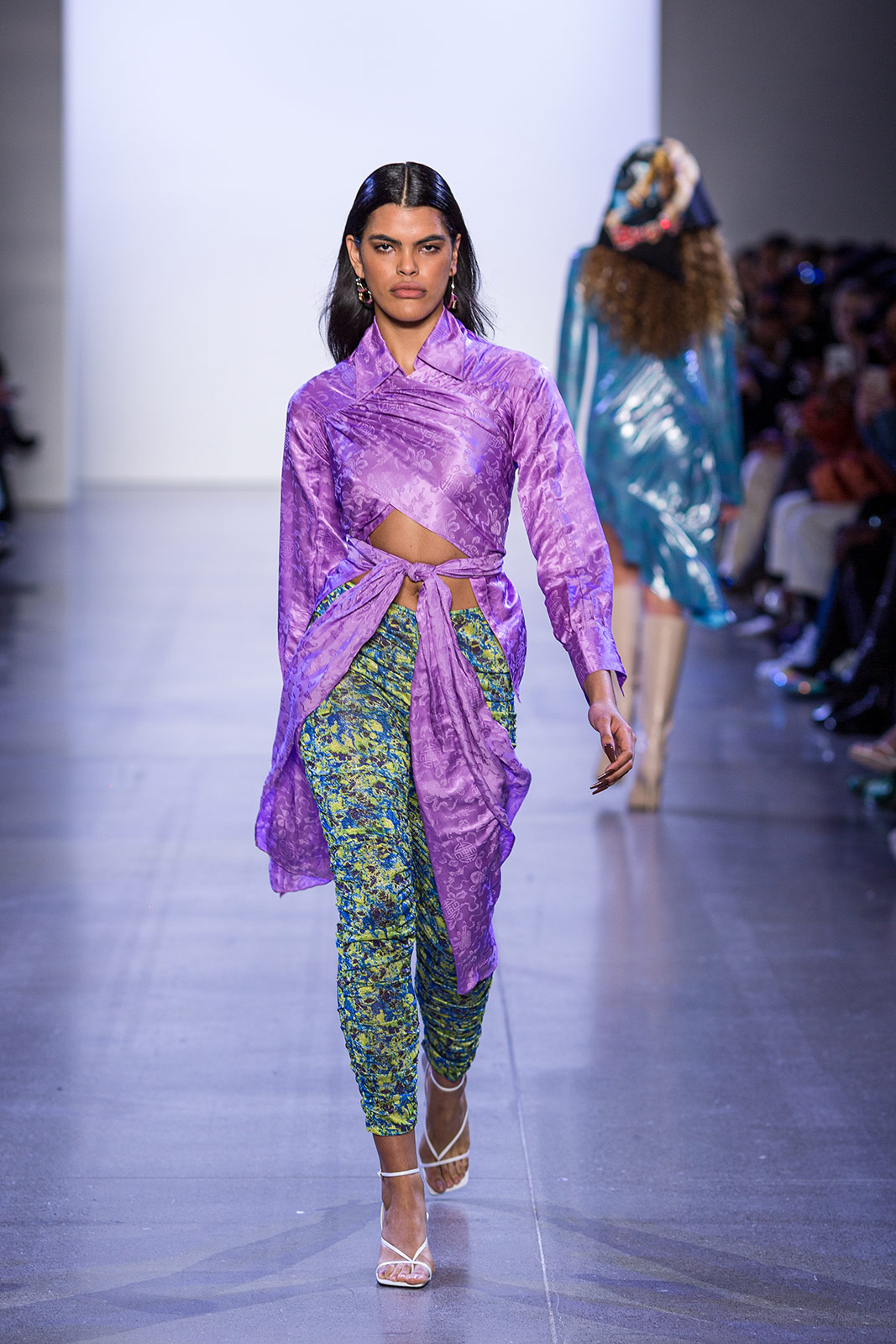 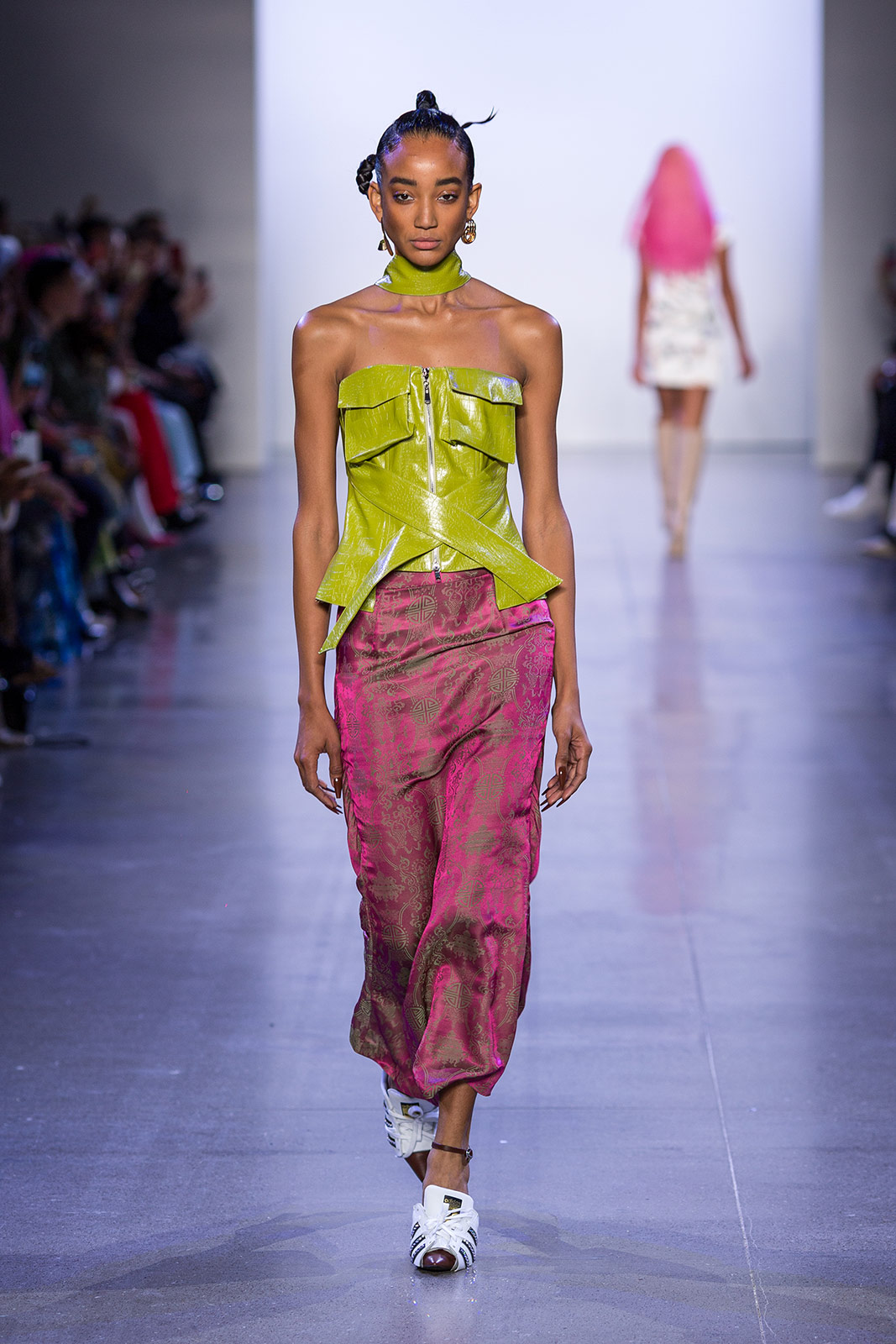 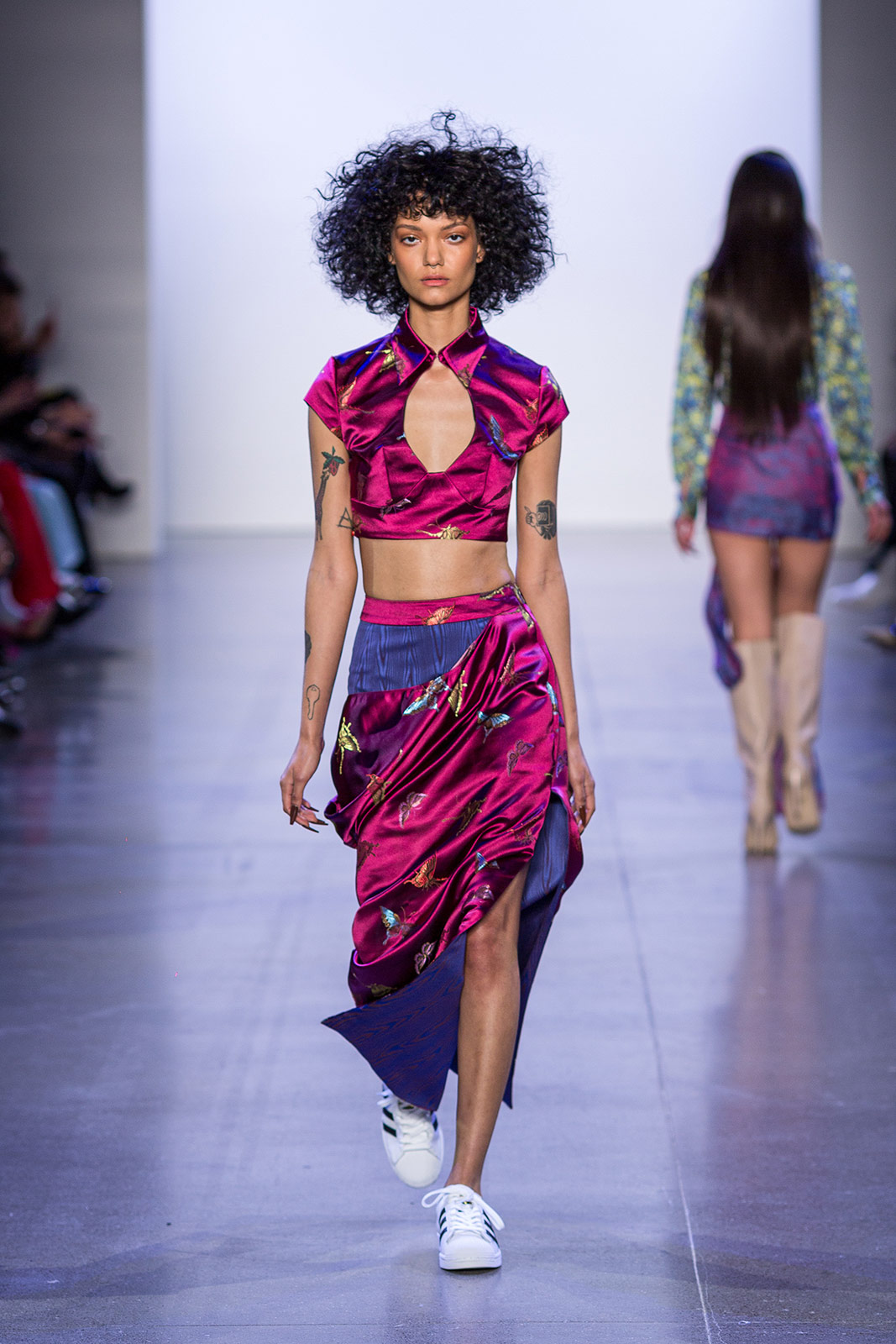